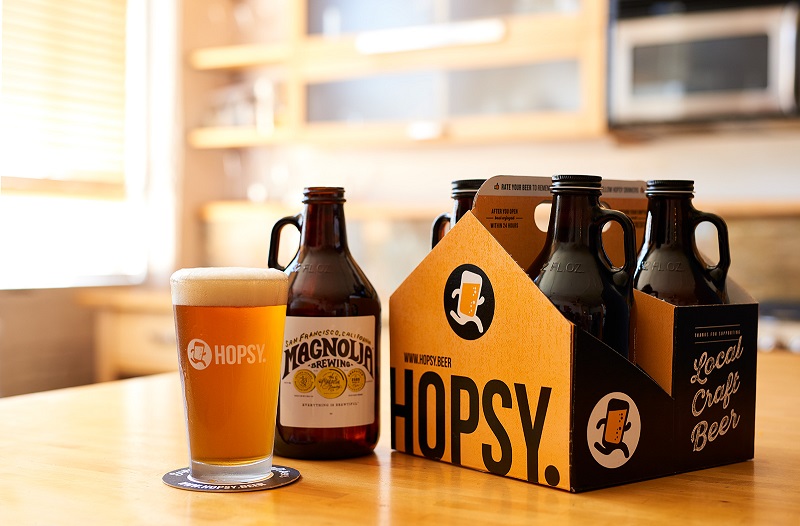 New York City dwellers now can have fresh growlers of local craft beer delivered direct from area breweries to their doorsteps. After launching in San Francisco and San Diego earlier in 2017, Hopsy, a beer online marketplace and delivery service, has opened an East Coast hub in New York City.

Hopsy started as a beer growler shop near San Francisco in early 2016, and soon after opened a second location in San Diego. The business started online ordering and delivery in early 2017. That took off so quickly that the founders realized this side hustle was more sustainable and profitable than walk-in retail. The California shops still offer shop growler fills, but those locations mostly have been repurposed as shipping hubs. The NYC hub is storage and delivery only for online orders.

“Because we work directly with the brewers, we’re able to ensure quality and freshness,” says Daniel Munoz, Hopsy marketing director, who recently relocated from California to New York to help get that hub going. “We’re all about supporting local businesses. We’re working with lots of small breweries that may not have distribution or have limited capacity for distribution, and we’re getting their beers out there. We’re trying to help them grow.”

Beer drinkers can visit the Hopsy website, choose their city, and then peruse the beer selection, which changes seasonally.

“We try to keep our menus rotating,” Munoz says. “While we currently don’t do custom fills, we try to offer interesting small breweries that are making interesting, cool beers.”

Once an order comes in, the Hopsy team fills the growlers using a CO2 purging process for freshness, then packages them in insulated boxes with ice packs for courier handling.

“We take full responsibility of quality of beer. We have a 100 percent guarantee,” Munoz says. “If your beer tastes off or you’re unhappy with it, we’ll credit you immediately and let you try something else.”

Costs start at $9.99 for a 32-ounce growler and $17.99 for a 67-ounce TORP (TORPs are packages that can be tapped by the Krups home draft appliance, which Hopsy also sells). Pricing is by style, and Hopsy offers free delivery on orders of eight or more growlers or four or more TORPS.  Otherwise, shipping is $15 per order. Munoz notes that courier pay is part of the pricing structure, and Hopsy discourages tipping the delivery person.

“We put a two-week shelf life on unopened growlers,” Munoz says. “We use 32-ounce growlers because you don’t want to have to commit to 64-ounces.”

“In California, we can’t keep up with demand—we are quickly looking for more brewery partners,” Munoz says. “We go directly to breweries and explain to them what we’re doing, and then work with them to ensure the freshest beer possible.”

He concludes: “We’re educators as well. We kind of go for that intermediary drinker to educate them on the importance of freshness. The word growler on its own doesn’t necessarily communicate beer, which is part of the challenge,” Munoz says. “But once you’ve used Hopsy, you know the quality you’re getting. It’s unique. No one else is doing growlers like this.”