The lineup of beer styles available today is quite impressive, but the lines between them are often blurry. The difference between porters and stouts might only be a matter of brewer’s discretion. These two form a virtual continuum, the minor differences barely justification for designating them one style, or sub-style, versus another. Avid beer fans love to debate such things, but with milk stout there is no such debate. The style can mean only one thing, that there has been an addition of sweet and unfermentable lactose. Milk stout is a mere century old, though much longer in the making. It’s a revolutionary, popular invention and cunning solution to a quandary. Its brewers capitalized on the shifting tastes of their patrons, who were tiring of aged beer and demanding more fresh beer, and usurped the long-popular porter, England’s 19th century stalwart. Milk stout was actually influenced more by a preference for mild ale rather than one for black beers. Today’s milk stouts, or mild ales, are essentially the same as their early 20th century ancestors, quietly stamping their mark in a quest for less extreme, yet satisfying brews.

Stout is a descendent of porter, the beer that appeared in London around 1718 as a counterpunch to sweet brown ales and fancy, hoppy pale beers. It was named for its loyal consumers, street and river porters of the busy mercantile culture. Porter differed from common sweet brown ales in its dry, aged character and full dosage of hops. Unlike regal pale ales, it was made with rougher, cheaper dark malt. Porter brewing kicked into gear a colossal industrial brewing revolution in England that saw London’s brew barons dominate the market, at home and abroad, for more than 100 years. Porter, though, was not a single style of beer. There were plain porter, stout porter, brown stout and double stout, among other terms. Stout (strong) porters eventually became known simply as stout, and regional characteristics further delineated the style. Still, porter and stout were essentially made from the same pool of ingredients, as they often are today.

Porter dominated the second half of the 18th century and much of the first half of the 19th century, though mild and old ales were available in pubs. Both were lightly hopped, contrasting with porters, stouts and the emerging pale and India pale ales. Brewers became adept at tailoring recipes with new, cleaner base and specialty malts. An understanding of microbiology and fermentation was also eliminating some of the ubiquitous stale character. Modern styles began taking shape by the end of the 19th century, offering unprecedented consumer choice. These options, their novelty and perhaps a stodgy image of porter and stout favored the rise of fresher, sweeter ales and hoppy pale and bitter beers. Mild ale, poised to topple the mighty porter, was sent out only a week or two after brewing. Mild was a general term denoting freshness (and sweetness by default) that could be applied to any rudimentary style. There were mild stouts, mild porters and mild bitters. By offering auxiliary versions of base brews, brewers astutely broadened their market appeal. Mild stout and porter gave impetus to the notion of milk stout, since any type of mild would eventually become stale and dry. Was it possible to brew a beer that would be forever mild, yet remain real and alive in the cask?

By the late 19th century, stout and porter had been battling upstart brews for some time. The development of milk stout became necessary as a means to survive for the former porter brewers, just as many of them had added ales to their portfolio years before. Mild porters and stouts were touted as nutritious to swarms of laborers in English cities, the vast majority of the beer and ale-swilling public. The idea of milk stout was proposed in 1875 by John Henry Johnson of Lincoln’s Inn Fields, who envisioned such a nutritive beer. He obtained a patent on this idea, which had not yet come to fruition, by proposing a milk beer made with barley, hops, lactose (a byproduct of cheese making) and whey. Though Johnson never saw his dream realized, the idea was taken up by others who saw its potential. In 1907, a lactose stout was brewed by Mackeson of Hythe, Kent, and sent to market in 1910, with the claim that “each pint contains the energizing carbohydrates of ten ounces of dairy milk.” Some patent infringement squabbles arose, but Mackeson licensed the beer-making to others, and within a few years, a dozen or more milk stouts were being brewed. Mackeson in 1929 became the property of Whitbread, which brought Mackeson’s Milk Stout brand to great prominence within a few years.

Marketing sweet stouts as nutritional was a great way in the late 1800s to garner interest, but lactose did not provide the promised nutritive value. Eventually, this hollow claim fell under scrutiny of British authorities, who mandated in 1946 that milk had to be stricken from the label as misleading. But brewers, ever the cagey, gave their brews names suggesting images of cream, milkmaids and dairies. Brewers outside the English mainland are under no such restrictions today, and lactose-enhanced brews made elsewhere, including America and even some of the British maritime islands, can be called milk stouts. American brewers have been at the forefront of reviving them.

The original Mackeson’s Milk Stout had a gravity of 1.054, roughly the same as the milk stout that brewers in North America make today. Between the world wars, British beer styles saw a significant drop in alcoholic strength across the board because of taxation and rationing. Mackeson’s dipped to 3.8 percent ABV, as it remains today. Savvy brewers took this opportunity to devise the low-gravity, highly flavorful brews that have helped sustain pub culture in Britain. Milk stouts proved to be a very popular style of beer in the first half of the 20th century and energized a preference for sweeter stouts in England. And while Irish stouts may sell better worldwide, it is the sweeter stouts that are more desired by craft beer lovers today. Of course, lactose is but one strategy that can be employed to craft a beer of sustained sweetness. Crystal malt in generous quantities will give the same effect but has an entirely different flavor. The milky, burnt-sugar flavor unique to milk stout is unmistakable and undeniable.

Milk stout has not seen nearly the resurgence among beer lovers that hop-accented American, Russian imperial and strong foreign extra styles have, but they do occupy an exclusive market niche. Some are widely popular, as they uniquely present a full-bodied, roasted, sweet alternative that delivers all the rich flavor of their stronger brethren without overpowering the palate with hops or the mind with alcohol. Much of that is due to the lactose. Lactose also provides a bit of viscous mouthfeel. Other than this unusual and definitive ingredient, milk stouts are brewed like any other stout, with grain bills of base, black patent and chocolate malts, and roasted barley to the whim of the brewer. All are excellent as dessert beers, rich and complex enough to complement, but not too filling.

This seemingly unassuming beer style that helped redirect tastes a century ago was actually quite revolutionary in its day. Perhaps this understated opulence is guiding modern beer lovers and brewers toward the more modest, yet full-flavored beers that are sometimes forgotten. Ironically, this step forward is actually a step into the past.

ABV: 5.7
Tasting Notes: The Duck-Rabbit Craft Brewery of tiny Farmville, NC, has made quite a name for itself on the East Coast in past few years as a dark beer specialist. Its onyx black Milk Stout has the rough and ready edges of a classic dry stout, smoothed out with the underlying sweetness of lactose. The aroma has cocoa powder, espresso and vanilla. A noticeably full mouthfeel unfurls the flavor of dark coffee and cream, burnt sugar and peaty roast. The roasty notes linger at the end along with a steady hop presence. DR Milk Stout straddles the line of dry and milk stout expertly, and is more than quaffable.

ABV: 6.8
Tasting Notes: The Lancaster Brewing Co. is another example of the robust and exemplary brewing culture that has flourished in Pennsylvania in the past 20 years. Nearly opaque and tinted red, Lancaster’s Milk Stout has 5.3% ABV and 22 IBUs, proof that full, rich flavor can come in a brew of modest proportions. Medium-bodied, the flavor is moderately roasty with overtones of milk chocolate and burnt dark fruit. The lactose nimbly rounds out the black malt flavor. The soft roast, velvety palate and easy sweetness make this stout as soothing and softly contoured as the Lancaster County countryside. Lancaster also brews a Double Chocolate Milk Stout with cocoa nibs that is available on draft only. 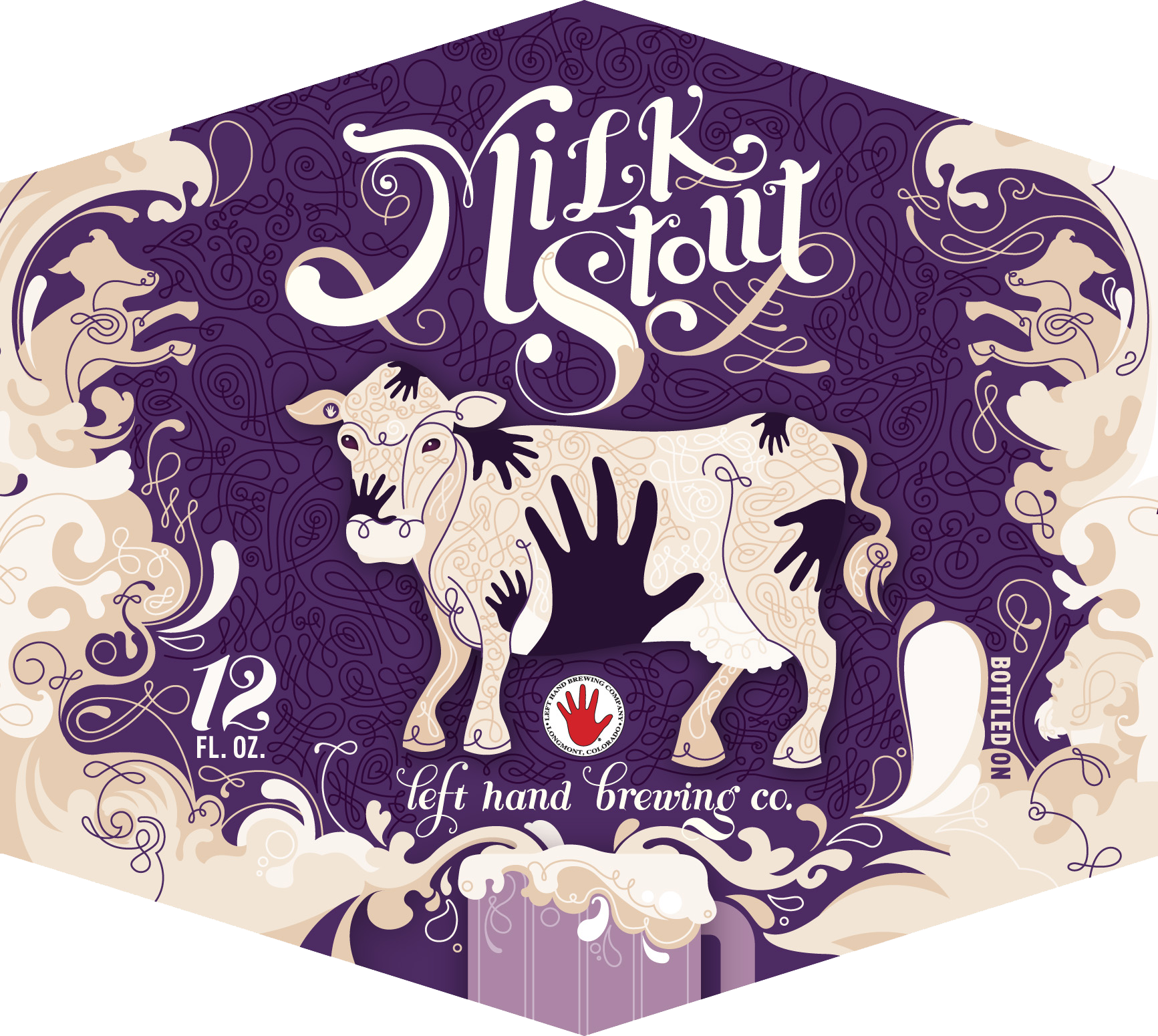 ABV: 6
Tasting Notes: Left Hand Brewing of Longmont, CO, has long been one of the more versatile breweries in the microbrew-rich state of Colorado. Milk Stout is part of its stellar everyday lineup. The bottled pour is pitch black, with a dense beige, persistent head. The nose is soft and dessert-like, with caramel, chocolate, vanilla, cream and a gentle whiff of hops. The mouthfeel is sleek and silky, the handiwork of flaked oats and barley in the grist. The flavor is nicely balanced, the sweet cream of lactose buffering the malty notes and offsetting the earthy contributions of chocolate malt and roasted grains. Left Hand has recently introduced this brew as a nitro dispense on draft and in bottles. A mellower stout does not exist. 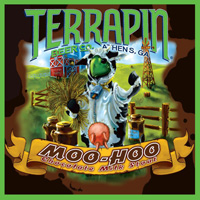 ABV: 6
Tasting Notes: The Terrapin Beer Co. of Athens, GA, has carved an admirable niche in the Southeastern United States brewing scene offering exceptional standard fare,exemplified by its Chocolate Milk Stout. Made with cocoa nibs and the requisite dose of lactose, the nibs offer a lucid cocoa powder essence to the aroma, along with honeyish, toasty malt, vanilla and espresso. Medium in body, Moo-Hoo shines in its flavor, as the lactose softens the cocoa into a malted milk chocolate taste accented with a hint of anise. The finish is fully roasted, but mellowed by dehusked roasted barley, and the satiny mouthfeel of flaked oats. Moo-Hoo is well-balanced at 30 IBUs.