One of Wisconsin’s newest breweries is drawing upon some of the state’s oldest traditions.

Operated by the Wisconsin Historical Society, Old World Wisconsin in the town of Eagle allows visitors to explore more than 60 historical structures across hundreds of acres of Midwestern landscape, staffed by volunteers depicting daily 19th century life. To commemorate the ties to historic farm brewing, an exhibit was established in partnership with the Milwaukee Museum of Beer & Brewing and various local breweries, which showcases a typical farm brewery operation.

Next year, Old World Wisconsin will begin raising funds for its forthcoming Sudhaus, which will feature a larger production brewery and beer garden.

“A fully operational brewery and beer garden, planned for since we opened in 1976, will be part of a reconfigured park entrance designed on a village-on-a-green theme,” says Dan Freas, director of Old World Wisconsin.

Until that new Sudhaus is built, the museum offers demonstrations that show how 19th-century farmers would have brewed. 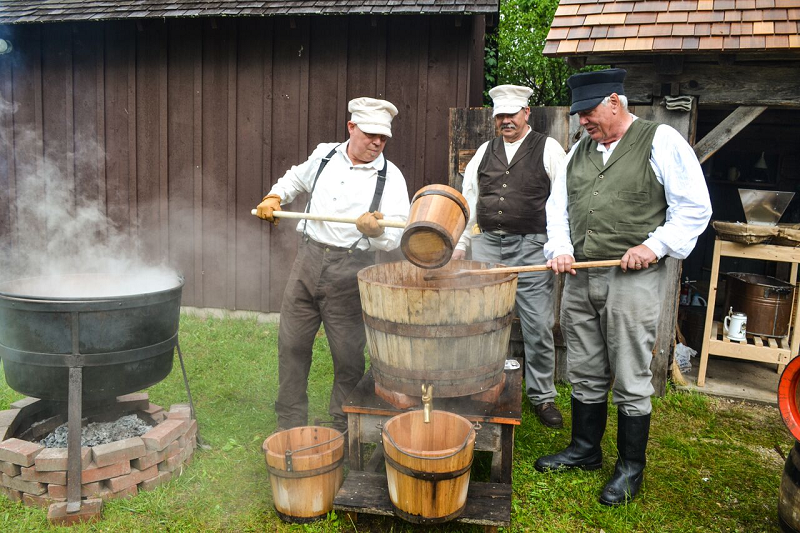 Dressed in authentic period clothing today is Gary Luther, a retired principal brewer of the Miller Brewing Co. and current member of the Master Brewers Association of the Americas. 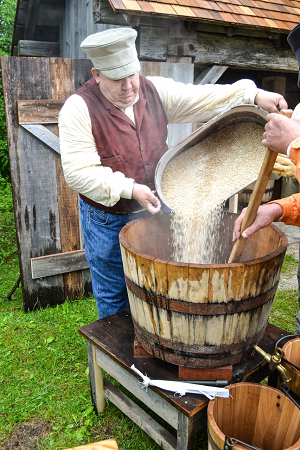 Luther begins brewing 15 gallons of cream ale by heating well water to 180 degrees Fahrenheit in an open-air kettle. He uses a hand-cranked grist mill to grind a mixture of Caramel 10 and pale malted barley. As the grains hit the water, the air fills with an earthy, malty aroma, reminiscent of breakfast oatmeal.

Farmers of the 19th century brewed a variety of recipes. Some were brought over from the old countries and handed down through generations, others shared by neighbors, and even a few discovered by experimenting with nontraditional ingredients. Some farmers used corn or rice as adjunct grains with molasses, pine needles or spruce tips as flavoring agents, but many used their own grains and hops and brewed with equipment purchased locally or homemade. From start to finish, brewing in the 1850s was a hands-on affair, and Old World Wisconsin replicates
that experience.

Luther stirs his mash in a wood lauter tun that uses a false bottom to siphon the wort, which sits covered for an hour while enzymes convert starch into sugar under a watchful eye.

Hot water from the boiling vat is added in calibrated amounts to help in sparging, whereby the sugar-rich wort is recycled, bucket by bucket, back through the mash until a clear liquid is gained. The mashed meal is saved for animal feed.

Next, the wort is transferred to a separate open-air brewing kettle and boiled for 75 minutes. First hopping happens 10 minutes into the boil to add bitterness, and this distinct, pungent aroma foretells the beer’s ultimate flavor. A second hopping is added 10 minutes before the end of the boil. True to history, Luther measures the hops by hand (historic recipes often include “by the handful”). 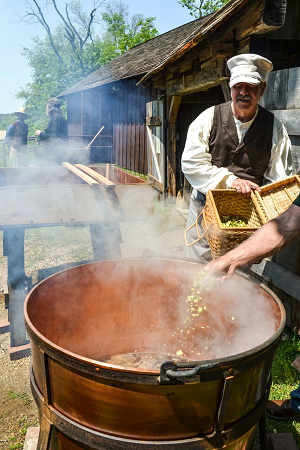 Boiling complete, the wort is transferred into a kuhlschiff (also known as a coolship or cooling pan), by ladling it into a trough and screening the spent hops. Well-to-do farmers owned a copper pan for this purpose, as that metal promotes flash condensation and quickly, and critically, reduces the wort’s temperature. Otherwise, wort sat overnight to cool in covered vats.

As part of its final journey to becoming beer, the wort is now transferred into fermenting tubs and the yeast pitched at 60 degrees F. Farm brewers knew fermentation was successful when they saw the frothy foam known as krausen develop on the wort’s surface. After fermenting for several days, the yeast produced alcohol, generated carbon dioxide and developed a multitude of aromas. At the end of fermentation, priming syrup is added to ready the beer for storage. Typically, yeast was harvested for another brew. Now transferred into small kegs, bunged shut and stored in a cool place, this table beer—unlike lager, which required lengthy cold storage—was ready to drink in just a week or two.

Farm brewing was a continual process in order to keep a steady supply for the family, friends and neighbors. Excess beer was often sold to local taverns. On the farm, beer was consumed at every meal and by all family members—including children. Beer was not only a refreshing beverage, it was also considered a foodstuff and necessary part of the diet. At a time when milk was unpasteurized and water often contaminated, beer was safe to drink due to boiling and fermenting, and, as long as equipment and supplies were kept sanitary and vermin-free, drinking it in moderation caused no ill health effects. As one brewing apprentice notes, “It was the drink that didn’t kill us.”

At Old World Wisconsin, beer is brewed with equipment, materials and recipes found on an 1850s farm, with minor concessions to modern methods. Hops and barley are grown, harvested and processed on-site, and well water is used along with locally propagated yeast strains.

And what will come of Luther’s cream ale? For now, government licensing stipulates that until an actual brewery is constructed, only brewing demonstrations are permitted—serving is verboten. Soon a park renovation will expand this prototype brewery into a full-scale Sudhaus, which will offer not only demonstrations and workshops but also tasting and sales of historically brewed beer.

“We share a passion to provide an experience that will educate and preserve the heritage and history of Wisconsin’s brewing legacy,” says Jerry Janiszewski of The Milwaukee Museum of Beer & Brewing. “A fully operational brewery will create an interactive experience and give an opportunity to have fun while learning about the historic brewing process.”

Brian Wettlaufer is a freelance writer in Franklin, Wisconsin. He can often be found enjoying a beer in his backyard and is always found at www.blwwrites.weebly.com.