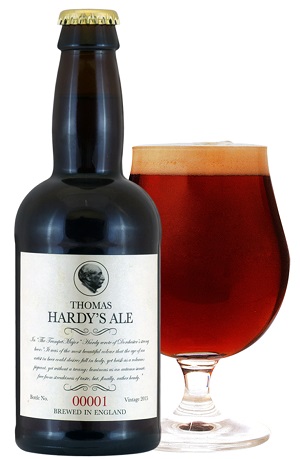 This article appears in the January issue of All About Beer Magazine, in newsstands now. Subscribe today to have the magazine delivered to your mailbox, computer, smartphone or tablet.

Thomas Hardy’s Ale has come back from the dead. A famous British barley wine that went out of production in 2009 has been restored as a result of a collaboration between an Italian beer export company and a London brewer.

The beer was first brewed in 1968 by Eldridge Pope in Dorchester, southwest England, the hometown of the novelist Thomas Hardy. The beer, 12% and aged in sherry casks for nine months, was meant to be a one-off brew for a literary festival that celebrated Hardy’s life. But the beer created so much interest that it became a regular annual vintage.

The last vintage appeared in 1999, as Eldridge Pope went out of business. George Saxon, whose Phoenix Imports had sold the beer in the U.S., bought the rights and got O’Hanlon’s Brewery in Devon, also in southwest England, to brew it. The beer reappeared in 2003 and was met with acclaim but production stopped in 2009 when O’Hanlon said it took so much time to age the beer that it was holding up production of its regular ales.

It has been restored by Sandro and Michele Vecchiato, who run the Italian company Interbrau. They bought the rights from Phoenix, and the beer is now brewed by Meantime Brewing Company in London. The first vintage was launched in Milan in September, and it has a superb aroma and palate of black currant fruit, toasted grain and peppery hops.

It will improve with age for up to 25 years. It will be launched in the U.S. and the U.K. in 2017, and beer lovers are advised to buy a batch and lay some down for posterity.