On a Friday night at Clouds Brewing in Durham, North Carolina, the bartenders are the epitome of efficiency. With a wave of a wrist and the pull of a tap handle, beer pours into my glass without a word exchanged. The bartenders track how much I’ve consumed down to the tenth of an ounce and can tell me, with 100 percent accuracy, the ABV, IBU and basic makeup of every beer on tap.

You see, these bartenders are machines, and Clouds is one of an increasing number of bars that allow guests to pour their own beers using wristbands with radio-frequency identification (RFID) technology. According to Darren Nicholson, head of sales and marketing for iPourIt, the largest self-serve technology on the market, there are close to 180 locations in America using the company’s technology, with many projects in the works.

“I think this is absolutely the future,” says Chris Briles, founder and head brewer of Cosmic Ales in Torrance, California, a brewery taproom that uses self-serve technology. “Especially as the prices come down, I believe more people will do something like this because, with the explosion of the taproom, you sometimes wait 60 minutes for a beer. Who wants to wait 60 minutes for a beer when you can get your beer right now?” 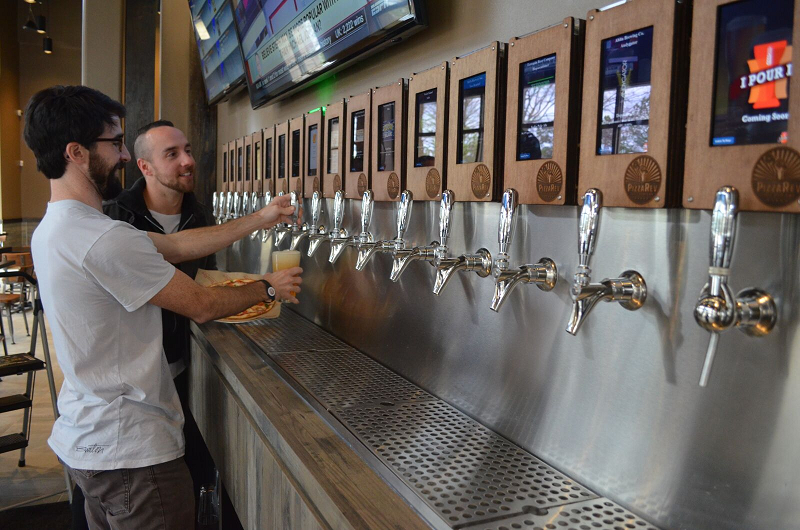 That agonizing wait is exactly what inspired Pour My Beer’s Josh Goodman to start his company a few years ago. He recalls waiting in line at a bar in Baltimore with a few friends and simply not being able to get a drink. He thought to himself, “ ‘We want to get beers, they can’t give it to us, and on the reverse side, the bar is probably losing money because of their inefficiencies as well.’

“Anyone I’ve ever talked to says it’s the most logical way to go out and have a few beers because you’re not forced to buy an entire pint,” says Goodman, whose company doubled in revenue from 2015 to 2016 and is on track to quadruple from 2016 to 2017. “You’re not going there and forcing the bartender to let you taste everything—you’re being self-serving; that’s our little tagline. We say it’s OK to be self-serving. It’s a logical evolution of the consumption of beverages; it puts the control in the hands of the person who wants access to the drinks.”

Of course, there are some who disagree with this logic.

“Some of these traditional bars say bartenders are there to talk and educate people, but I’ve not been talked to or educated by any bartender around here because they’re too busy pouring beer,” Briles says. “We have about five people, plus me and Sabrina, my partner, on duty. One person is working the cash register, and then we have a beer concierge that will instruct everybody on how to use this system. They’re very knowledgeable about each one of the beers we have on tap, so they can talk about that, or anything beer-related for that matter.”

One of the main perks of self-serve is the ability for guests to try small amounts of every beer on tap, without that money coming out of the brewery’s profits. According to iPourIt, a typical patron will pour on average 4.7 ounces per visit to the beer wall, and they will visit the wall 5.5 times per visit.

“The average person is not going to pay $13 for a 10-ounce pour of beer,” says Nicholson. “However, in a self-serve application, when a patron walks in, they recognize that they’re there to taste and that they’re paying for every ounce poured. By the way, the average person is a he, and he’s 32 years old—we know this because we collect all this data. And he’s price-averse, so he tends to go to premium-priced product that is unique and taste it before he goes to his regular loyalty product.”

Though the self-serve concept is catching on at bars and breweries across the country, it wasn’t as popular when Keg No. 229 in New York City opened in 2010. Owner Calli Tedesco implemented it because she saw it as a new way to engage with the city’s drinkers.

“First of all, it gets people socializing because when you’re sitting at a table, you’re only sitting at a table with the people you came with, but when you walk up to the wall, you might engage in conversation with other people at the restaurant or bar,” says Tedesco. “I think people have fun taking pictures while pouring their own beer.” 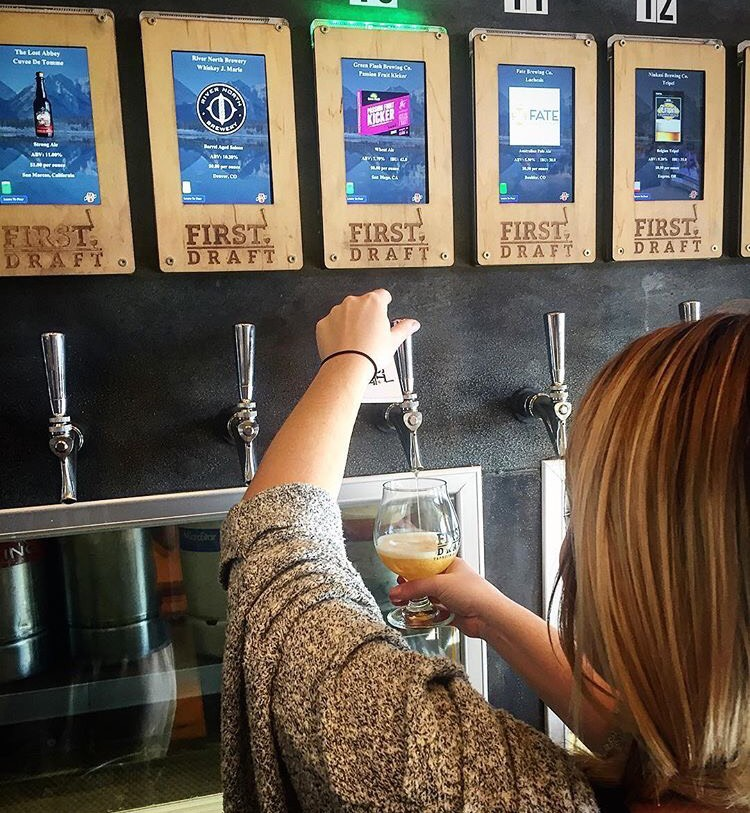 Despite the advantages of self-serve, many craft breweries prefer to stick with the traditional method of human bartenders.

“I think it comes down to the storytelling component and being able to share the narrative of why we exist,” explains Sean Lilly Wilson, founder of Fullsteam Brewery in Durham. “So why do we exist? And I think for us as on-site makers, that’s better told through people that curate that experience, who share that enthusiasm, who can answer questions and who can provide moments of curated serendipity, if that doesn’t sound too pretentious.”

Wilson emphasizes that although he would never use RFID technology in his taproom, he is not against the existence of self-serve establishments. In fact, several Fullsteam beers are on tap at Clouds Brewing and Pour Taproom in Durham, a new self-serve bar that exclusively serves beer from other breweries.

“They’re pretty insistent on the fact that their goal is to get people to sample a few things of ours and say, ‘Cool, I really liked that; we should go check them out some time,’” Wilson says of Pour Taproom. “It’s no different from a beer festival in that sense.”

And so it seems craft brewers are fine with the self-serve concept, so long as automation doesn’t send bartenders the way of the milkman.

Mark Slattery opened First Draft Taproom and Kitchen in Denver’s River North district in 2015. Though he will soon open another location in Los Angeles, he readily acknowledges that the self-serve concept will never replace the human element.

“We definitely see it growing, but I don’t think it’s ever going to replace everything and we don’t really want it to,” says Slattery. “We want it to be a differentiated experience for people, just like restaurants provide all different levels of service. … We think it’s a nice niche that fits into the bar and beer scene.”

Hannah Pitstick is a part-time beer pourer and part-time journalist based in Durham, N.C., who writes about everything from couples with frighteningly small houses to men with alarmingly large taxidermy collections.