Sorting through the evolution and chronology of beer styles can be an interesting, if somewhat muddled, trip. Seldom do things travel along an uncluttered, linear path. Instead, the interwoven events tend to resemble a Venn diagram. Politics, agriculture, tradition and even serendipity figure into the equation. Many styles are fairly recent designations for brews hundreds of years in the making. All of these peculiarities figure prominently into the genesis of weizenbock, the quirky, strong wheat beer forged in Bavaria in the early 20th century.

Weizenbock was introduced by the First Family of wheat beers in 1907, a stroke of ingenuity that married a Bavarian fondness for strong, dark and malty beers with an equal affection for weissbier. That debut was a long time in the making, especially after centuries of highborn wrangling over the control of weissbier brewing. The moment was seized by the Georg Schneider and Sohn, savvy visionaries and persistent brewers who still specialize in wheat beer and have still not stopped testing the brewing waters.

An original ingredient in seminal Sumerian brews, wheat in brewing is as old as beer itself. It is a popular, vital ingredient today, and has remained so throughout the history of brewing. Northern Europe especially boasts several remnants of medieval wheat brews with lambic, Berliner Weisse, gose and witbier. Einbeck, Germany, one of the first important brewing centers of Continental Europe in the 14th century, built its legacy upon wheat beers. Einbeck was a member of the powerful trade and mercantile Hanseatic League. The league was formed in Lübeck, Germany, in the 12th century to protect the interests of the merchants and combat unsavory characters along the coasts and inland routes of Northern Europe.

Each city had a specialty. Einbeck’s was beer, so coveted that it was distributed throughout Europe. Known as weissbier (white beer), it was one-third wheat, hoppy and strong, and considered more wholesome and savory than common barley (brown) beers. Einbeck supported about 600 brewhouses by the end of the 14th century.
Einbeck was also near one of the earliest regions to grow hops, their use no doubt adding to the superb quality and reputation of the beer. Brewing was done between St. Martin’s Day (Nov. 11) and May 1, when it was cool enough to ferment and store without worry. The proficiency of the Einbecker brewers did not go unnoticed by Bavarian nobility, who would later enlist them to improve Bavarian weissbier.

Bavarian brew was quite different from that of Einbeck, and not nearly as fetching. Southern Germans typically made dark barley beers and were in the throes of learning the finer points of bottom fermentation. Bavarian nobility were mighty impressed with Einbecker weissbier and determined to make their own.
South German weissbier was first brewed in rural Bavaria and Bohemia by the noble Degenbergers, who built a dedicated brewery in Schwarzach, Bavaria, in the late 15th century. By virtue of royal privilege, they were decreed exclusive producers, under the auspices of the House of Wittelsbach. From that point forward, weissbier brewing rights were often contentious for next 250 years.
In the mid-16th century, Duke Wilhelm IV and son Duke Albrecht V squabbled over distribution rights and taxation. This ducal feud and subsequent lack of Degenberger heirs eventually cast the sole, lucrative rights to the Bavarian House of Dukes, governed by the Wittelsbach dynasty. Duke Maximilian I enacted an outright ban on public weissbier brewing, noting the unlimited profitability of their Schwarzach brewery.
Maximilian brought the Schwarzach brewer to Munich, where he was building a white beer brewery next to his brown beer operation. This is now the home of the famous Hofbräuhaus. He also took control of the other Degenberger breweries, essentially creating a monopoly.

Though only nobility could brew weissbier, the citizens consumed it in prodigious quantities. By the 18th century it had become so popular that all pubs serving brown beer (Munich dunkel lagerbier) were forced to serve weissbier, padding the House of Wittelsbach coffers even more.  Its expansive brewery network ensured a steady supply.

Gradually, the greatly improved dunkel lagerbier of Munich chipped away at weissbier’s dominance. Ducal weissbier interests were beginning to wane, prompting heir Maximilian III to start selling his brewhouses. The Munich weissbier brewery was sold to private interests in 1802 and converted to a brown beer brewery. When a new tenant was needed at the Weisse Hofbräuhaus in 1855, private brewer Georg Schneider I took up residence and defiantly continued to brew weissbier, in spite of its fading popularity. He threatened to vacate the premises in 1872 unless granted private rights to brew weissbier, sans royal meddling. He was granted those rights by King Ludwig II, reigning heir of the House of Wittelsbach (and grandson of Ludwig I, whose wedding in 1810 launched the tradition of Oktoberfest). Schneider tripled the output within a few years. Schneider not only saved Bavarian weissbier from extinction, but miraculously also made it fashionable again, and sales steadily climbed.

Georg I and son Georg II ran the brewery until 1890, when both of them died. The reins were handed to Georg III, who himself died in 1905 at the age of 35. The brewing operations were left in the adroit hands of Georg III’s wife, Matilde. Not only did she maintain the brewery’s growth, but also introduced Bavarians to a new style of beer, a weizenbock called Aventinus, in 1907. Brilliantly, she capitalized on the popularity of seasonal, bottom-fermented bocks and doppelbocks, and the ascent of weissbier. It combined dark Munich malts with top-fermenting weissbier yeast, and offered doppelbock strength. Unlike a lot of “shoehorned” styles we have seen recently, this was a union crafted in beer heaven.

Weizenbock has never been brewed extensively in Germany since the style was introduced by Schneider—odd, given the success of Aventinus. Some never make it out of Germany, offered on-premises or regionally only. Several outstanding examples, though, are imported to North America: those featured in the tasting notes and a few others (Mahrs-Bräu Der Weisse Bock, Brauerei Michael Plank Heller and Dunkel, and Erdinger Pikantus). Those magnificent seven represent a fairly diverse range colorwise. Schneider also makes an Aventinus Eisbock.
American brewers certainly have embraced weizenbock, with hundreds available from brewpubs and micros, usually made to flatter the German versions.

In the true hybridized, collaborative legacy of weizenbock, Brooklyn Brewery brewmaster Garrett Oliver teamed up with Georg Schneider braumeister Hans-Peter Drexler to craft two weizenbocks, each working in the other’s brewery. The beers had an uncharacteristic bold hop profile and were dubbed Brooklyner-Schneider Hopfen-Weisse when brewed in America and Schneider-Brooklyner Hopfen-Weisse when brewed in Germany. These symbiotic brews have been retired, but here’s to hoping they will make an encore performance.

Few beers combine so exquisitely several different stylistic profiles as does weizenbock. Bavarian hefeweizen and dunkelweizen are known primarily for their natural haze, yeasty texture and extraordinary palette of top-fermentation products. Weizenbock expresses all the banana, clove and vanilla aromas and flavors of its less formidable brethren. These are tempered by a firm background of malt.

Dark weizenbock features the same Munich malt that is the cornerstone of dunkel and doppelbock, giving a full and lush malty framework. Dark character malts lend notes of raisin, plum and molasses. If aged properly, these even take on some of the portlike notes of fully matured strong ales.

Lighter versions of weizenbock are akin to helles or maibock, using pilsner and smaller amounts of toasted malt for the deep golden color and clean, malty and bready profile. Some weizenbocks lie in between the two extremes, presenting a wide range of options within a fairly exclusive style.

Of course, the main player in any weizenbock is malted wheat. Proportions are generally in the 50 percent range, as with any Bavarian wheat beer. Besides the creamy mouthfeel that wheat brings, the flavor is equally distinctive. Malted wheat can be described as having a grainier flavor and aroma than barley, with a hint of tartness.

The wheat-induced haze is usually accompanied by bottom conditioning, both of which add to the textural, earthy experience, with a bonus of a billowing, effervescent head, unusual in a beer of such fortitude.
Strength is commensurate with regular bock and doppelbock, at 6.5 to 9.0% ABV, with some extending into the double digits. Aventinus Eisbock is made in the same manner as regular eisbock, chilled until ice crystals can be removed to concentrate flavors and aroma to sublime levels.

The diversity of weizenbock means that there is one for everybody. On the other hand, there is no reason not to savor them all. For sheer complexity they are hard to beat, especially when one is in need of a winter warmer. 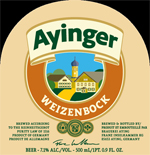 ABV: 7.1
Tasting Notes: Ayinger Weizenbock was first brewed in 1995 to commemorate the 60th birthday of Managing Director Franz Inselkammer Sr. Misty, sunny gold, it unleashes three fingers of firm ivory foam. The aroma is fresh and well-rounded, a heady fusion of wheat malt, banana, clove and pear with some floral noble hops. Medium in body, with a flavor that offers some grainy sweetness, but is dominated by banana and spicy, peppery cloves. Elegant, well-conditioned, smooth and refreshing. A picture-perfect presentation in a weizen glass. 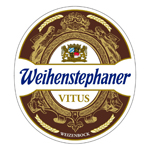 ABV: 7.7
Tasting Notes: The Bayerische Staatsbrauerei Weihenstephan of Freising, Bavaria, is familiar to all, brewing of some of the world’s most famous and stellar beer. Vitus pours hazy, bright lemon-yellow, and is crowned by three rambunctious inches of pure white foam. The nose is dynamic, sporting phenol, cinnamon, clove and loads of banana, some pear and wisps of vanilla and lemon zest. Mouthfeel is slick, textured and crisp. Some sweetish, doughy malt lingers in the finish along with spicy yeast imprint. This voluptuous blonde is world-class. 7.7% ABV. 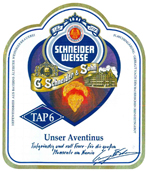 ABV: 8.2
Tasting Notes: TAP6 Unser Aventinus is brewed in Kelheim, Bavaria, part of the Schneider Weisse portfolio. Its original gravity of 18.5° Plato gives it the claim as Germany’s original “wheat doppelbock.” The foggy mahogany hue is topped with a creamy beige head. The aroma bustles with banana, raisin, chocolate, cherry and licorice. This is followed by earthy flavors and dessertlike spiced banana bread, molasses and malt. Aventinus Eisbock (12% ABV) is even more compelling than TAP6 Unser, delivering deeper tones, extra roast, malt and notes of port wine. Spirited to be sure at 8.2% ABV. 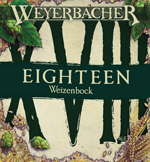 ABV: 11.1
Tasting Notes: Eighteen is a serious weizen doppelbock at 11.1% ABV, and part of Weyerbacher’s Anniversary Series. German malts and the authentic weizen yeast make this every bit the Bavarian-style classic. Dark brown and turbid, with a head tamed by the alcoholic strength. The nose is similar to a Belgian quad, with dark, dried fruit, banana bread, clove, cinnamon and cocoa. Malty and sweet, the flavor is full of nutty chocolate and dessert spices. Brewed in Easton, PA. Get some before it disappears.