The Backstory on Montana’s Oldest Brewery

Three decades ago, Reinhard and Trudy Schulte, a flush couple from Bavaria, had an idea: open a small, more traditional brewery in Montana.

The idea was born of the necessity of finding decent beer not only in an America awash in watery light lagers, but in one of the nation’s most sparsely populated states. In the mid-1980s, Montana had about 800,000 people spread over its more than 147,000 square miles (that’s nearly three North Carolinas).

The Schultes lived on several hundred acres outside of Missoula, a city near the Idaho border best-known as the home of the University of Montana, so they picked it for their brewery. The last brewery in Missoula had closed in 1964, and there was only one other brewery in the entire state—a 1984 resurrection of the Kessler Brewing Co. brand, which had operated in Helena until 1958.

The Schultes called their new brewery Bayern, after the German word for Bavaria, and hired a consultancy to get the brewery off the ground in a building they owned in Missoula. They already leased space in the property to a bar and a restaurant—a potentially built-in customer base in an otherwise inhospitable climate for more traditional beers.

The consultancy only took the Schultes so far: a basic setup with small-scale brewing equipment. To make Bayern a truly self-sustaining concern, they looked eastward—way eastward.

Trudy Schulte came from a brewery dynasty in what’s now Germany, and her family’s brewery had routinely tapped Doemens, a brewing school near Munich, for talent.

In early 1987, a student at Doemens named Jürgen Knöller was readying for graduation. Although only in his early 20s, Knöller already had nearly a decade of experience in the industry, starting with an apprenticeship in 1978.

Knöller planned to work for German brewing giant Spaten post-graduation, particularly in its international operations. He wanted to see the world and Spaten needed people on the ground in central China. That position was not going to open up for several months, and so Knöller took up the Schultes’ offer of a six-month job in Missoula.

Before he accepted the position and left West Germany with two suitcases—one full of books, the other of clothes—he got out a map. As he saw it, Montana was “on the upper left corner” of America, near Calgary, Canada, which would be the site of the 1988 Winter Olympics. Knöller figured he could bum around ski slopes while helping launch a brewery.

Bayern debuted in August 1987, the month Knöller arrived Stateside. It was a brewpub in all but the legal sense, as Montana did not allow such operations. Bayern had to go through a distributor to sell its beers at the restaurant and bar right on the other side of a glass wall separating the businesses—a perfect illustration of some of the juridical inanity regarding alcohol left over from Prohibition. 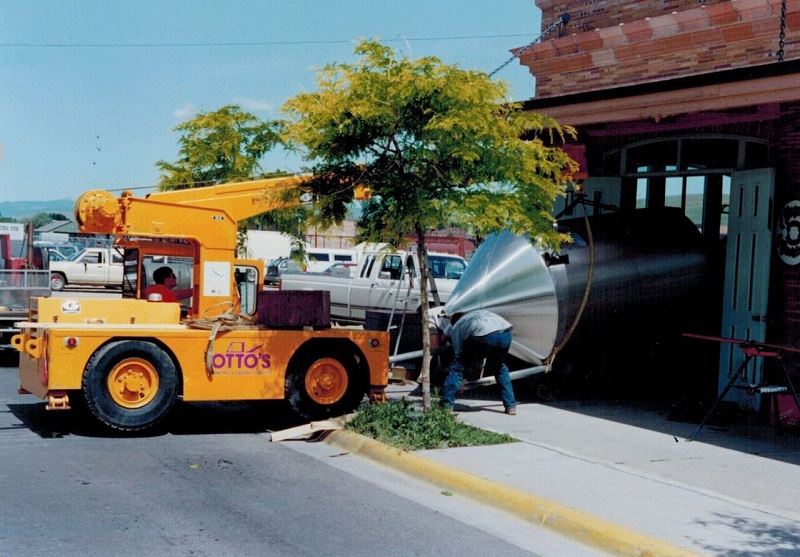 There were other challenges, too, ones that would likely be familiar to other pioneers in what was then called microbrewing. Equipment was basic—traditional does not necessarily mean better—and supplies sometimes difficult to come by. Yeast, in particular, gave Knöller headaches. He couldn’t rely on cultures at first, but liquid packs. “Sometimes it worked,” he recalled, “sometimes it didn’t.”

The brewery eventually found its technological and stylistic footing after a few months, in large part due to Knöller’s research, which included stop-ins at the nearby University of Montana.

The brewery specialized in lagers, and its offerings from the get-go were exotic for much of the United States. Its Amber Lager was a märzen, for instance, a German style that would become best-known in the States as the basis for Oktoberfest beers. In December 1987, Bayern released a strong, dark doppelbock, a lager rarely found in the U.S. even through imports. There would also be that first year a wheat ale, a departure from the company’s lager lineup and one of the first wheat-based offerings, period, from a smaller, more traditional brewery.

Bayern’s startup phase complete, Knöller turned his attention to preparing for the Spaten gig. On a trip home for Christmas, however, Knöller found that Spaten had pushed the China start date back again. Then, the German brewery nixed the plan entirely, following the Chinese government’s massacre of protesters in Beijing’s Tiananmen Square in April 1989.

Knöller would stay in Montana. By that point, too, the culmination of the Cold War had shredded the Iron Curtain, and the Schultes were looking to invest in the soon-to-be former East Germany. They divested themselves of their American holdings, including Bayern.

Knöller stepped in with a loan from a friend and acquired the brewery in January 1991. More than 25 years later, he and Bayern are still there—the oldest operating brewery in a Montana with more than 60 now.