Pour a Perfect Head with this Countertop Draft System

All About Beer Magazine's Beer from the Source
September 20, 2016 Anne Fitten Glenn 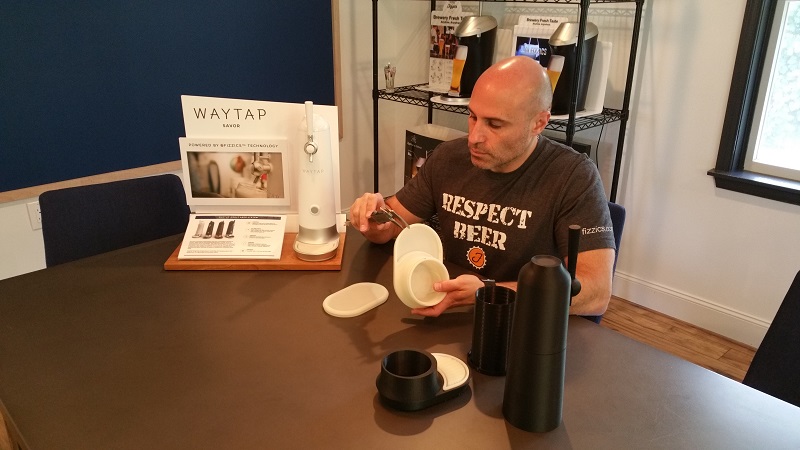 Craft beer drinkers tend to agree that beer is best at the brewery or on draft at a favorite taproom. Longtime colleagues Philip Petracca and David McDonald started talking about how great draft tastes compared to cans or bottles while having post-work beers at Brooklyn Brewery a few years ago.

There are the obvious reasons that beer from the source tastes better—the beer is fresher, especially if you’re bellied up to a brewery bar—also, the CO2 added as beer is forced through a draft system increases the head, and thus, the aromatics.

Even so, Petracca and McDonald, both engineers with science and technology backgrounds, were inspired to find a way to make beer that isn’t dispensed through a traditional draft system taste as good as beer that is.

“We talked to lots of brewmasters who felt that the mouthfeel of their beer often changed once it was packaged in bottles or cans. We wondered if we could fix that,” Petracca says.

The twosome spent several months researching the science behind draft systems, beer flavor profiles and human taste receptors, but they didn’t get very far with producing perfect head out of a bottle. Then one night Petracca was sitting with his sick newborn.

“There was a humidifier in the room and, being an engineer, I looked at it and wondered how it worked,” says Petracca. “So I took it apart.”

What he discovered was that humidifiers use a technology—sound wave oscillation—to vaporize water. This technology has been around for more than 100 years, he says. But Petracca realized he might have found a new application for it.

“Philip called me at around 3 a.m.,” says McDonald. “I got up, went into my basement, and dug out a similar humidifier. With pieces of that, I was able to build a machine over the weekend that used sound wave oscillation on beer. It worked almost immediately.”

The company cofounders patented the technology for beverage use. How it works is fairly simple. Open the can or bottle and place it inside the system. Place the draft tube into the beer and close and seal the system. Then “tap” the beer by pulling the handle forward—the beer is poured under pressure at a controlled rate. There’s a digital micro-control that adjusts pressure to control the rate of flow and maintain carbonation. When ready for head, push the handle back. That’s when the sound waves kick in to agitate the existing CO2 in the brew and create the aromatic head that beer aficionados crave. All this can take place on a kitchen countertop or on the go.

“Aroma is 70 percent of our overall perception of flavor,” Petracca says. “The ideal density and nucleation of the existing CO2 creates foam that sends a message to cranial nerve number five and tells the brain ‘This is good texture.’”

After tinkering with the prototype (the partners are big into 3D printers), Petracca and McDonald debuted it at beer festivals. Beer drinkers were intrigued. In May 2015, the partners set up a crowdfunding campaign to mass-produce the Fizzics Draft Beer System. They hit $50,000 within the first day, and the campaign ultimately raised more than $250,000. At that point Petracca and McDonald felt confident enough to quit their day jobs. The product launched in November 2015 exclusively with Brookstone. Early in 2016, it became available from several other big box stores, including Best Buy, Target and Amazon.

Petracca admits there can be a learning curve to producing the perfect amount of foam for the style of beer the customer is drinking.

“I like one-inch foam on IPAs—it really releases all the hop aromas. But give me a fruit beer, like a cherry porter, and I can drink almost a whole glass of that as foam,” he says.

Part of what’s interesting is that because of the sound wave oscillation technology, the Fizzics draft system doesn’t require CO2 or Nitro cartridges. The system runs on four AA batteries. The co-founders claim the system can be out of delivery box and up and running in three minutes. 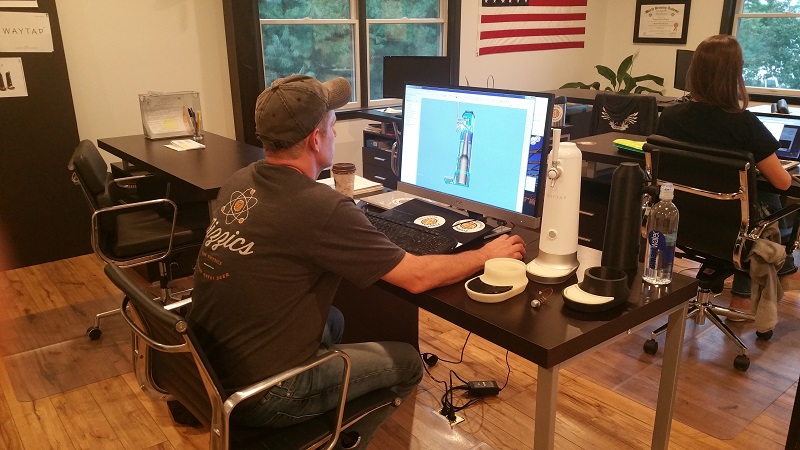 On September 20, 2016, the Fizzics company, which now employs eight, launched a Kickstarter for their second draft system, a smaller, sleeker, more affordable countertop device called the Waytap. Offered to Kickstarter supporters at $90, the MSRP will be $130, as opposed to $199 for the first system. The original has the capacity to tap growlers and large format bottles and cans, while the Waytap works only with 12-ounce bottles and up to 25-ounce cans.

“We’re sensitive to not altering the flavor the beer. Our goal is to maintain the purity of aroma and flavor that the brewer had planned, but to make it taste just as good as it would out of a can as out of a draft tap,” Petracca says.