How Stone Started Rolling 20 Years Ago 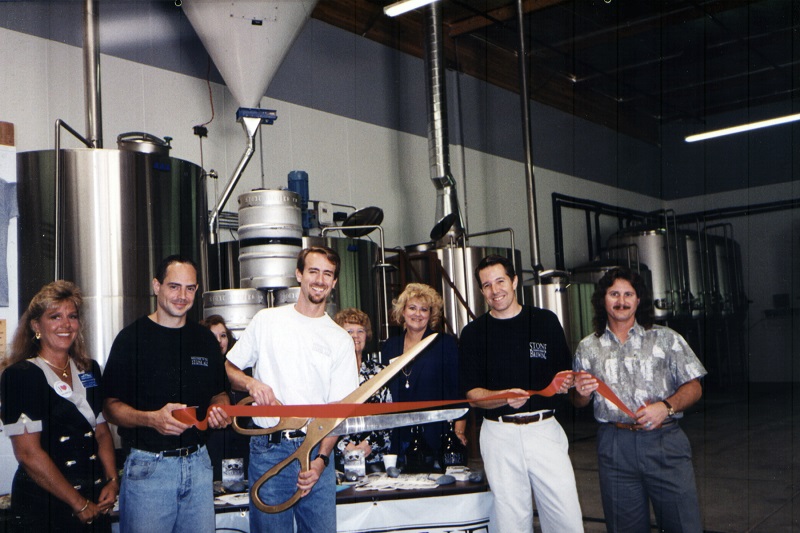 Twenty years ago, the Stone Brewing Co. was preparing to open in rented warehouse space in San Marcos, about 35 miles north of San Diego. The opening, on Feb. 2, 1996, would be the culmination of years of dreaming and planning by Stone’s founders, Greg Koch and Steve Wagner.

Koch was born in Southern California and grew up in Ohio. He moved back west in 1984 to pursue rock stardom, attending L.A.’s Guitar Institute of Technology above the Hollywood Wax Museum and working for a time as guitarist Steve Vai’s tour photographer. Along the way, Koch earned a business degree from the University of Southern California. He managed bands and eventually launched a business in downtown L.A. renting studio space to musicians.

It was while attending USC that Koch frequented a downtown L.A. bar called Al’s. Still defiantly punk in a new-wave world, Al’s reveled in its dive-y reputation, hosting things such as a “No Talent Night” every Thursday—Koch’s preferred time for stopping by. Al’s also carried up to four draft beers at a time. One Thursday evening, the tap choices were Löwenbräu Dark and Anchor Steam.

The signature offering from the independent, small-batch brewery up the coast in San Francisco turned Koch into a self-described “beer geek.” Amid California’s bustling beer scene, which Anchor Brewing Company also sparked, Koch started to homebrew—and to mull making his geekdom pay.

Enter Steve Wagner. The Chicago native was one of Koch’s tenants at the studios in L.A. Wagner’s English degree from the University of California-Santa Cruz had translated into 15 years touring as a keyboardist and bassist, during which time a bandmate got him into homebrewing. Wagner obsessed over it as both a hobby and as a means to getting off the road, into something more stable.

Wagner and Koch barely knew each other from the studio space. Wagner’s band paid its rent on time, so there was little need for interaction with Koch, the landlord. It was when they ran into each other at a Saturday seminar called “A Sensory Evaluation of Beer” at the University of California-Davis that they really fell to talking.

California’s bustling beer scene had gone national by the early 1990s. Hundreds of would-be Anchor Brewing Companies were springing up, and small-batch beers made from traditional ingredients appeared ubiquitous in some regions. The sky seemed the limit. Now was the time to jump in, Koch and Wagner agreed, but where?

Wagner did not want to move back to Los Angeles from his current home in Washington State, where he had turned professional brewing-wise with Pyramid. Koch himself was not averse to leaving L.A. One idyllic weekend in March 1995, Koch went to Solana Beach in northern San Diego County with some old college buddies. This was the place, he thought. He called Wagner, whose brothers had gone to college in the area. He was in.

Five weeks later, Koch drove his Mitsubishi Diamante the two hours from Los Angeles to Solana Beach to move in with a friend. It was in that condo that he brewed up the first test batches of what became Arrogant Bastard Ale, Stone’s most famous offering (now brewed through a spinoff called the Arrogant Bastard Brewing Co.).

Arrogant Bastard, though, was still nearly two years off as a commercial release when Stone opened in San Marcos in February 1996, with an angel investment from Koch’s father. The brewery’s inaugural offering was a pale ale, the first keg of which the Pizza Port Brewing Co. bought in July 1996 for its restaurant in Solana Beach.