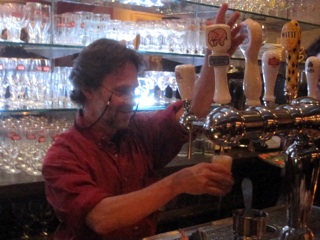 Here’s the deal. Stella Artois runs the World Draught Master competition each year in which bartenders (or civilians) compete in pouring the perfect glass of Stella via the nine-step pouring ritual. I’ve judged this competition in past years and did so again this year at the U.S. finals in Boston on September 17. As part of all this activity, the folks at Stella in the U.S. asked me if I’d like to try a guest stint as a bartender at a NYC bar — for the experience of seeing what it was like pouring beers for customers after I’ve been writing about beer for 16 years. My reply: “Sure, why not.”

The place chosen was BXL East, the newer of two Belgian beer bars/bistros in midtown Manhattan. I wasn’t at all nervous about doing this, but when I showed up at BXL East, I got the sense the managers on duty — Maor Livni and Klaas Claes — weren’t too sure about letting this unknown guy behind their bar. The bartender on duty — Matt Gebhard, who is also the Beverage Director for the two BXL bistros — seemed perfectly at ease with the deal. And, as it turned out, I wasn’t unknown to Matt. He knew my name from the writing I’ve done.

Matt explained the basics to me, showed me where all the branded glasses were for the 15 beers on draft and, most importantly, told me which taps were pouring with just the right amount of CO2 or too much or too little. That was the only real learning curve of the night.

Initially, Matt gave me beers to pour after customers gave him their order, but as I became more comfortable behind the bar (it didn’t take long) I began greeting customers and taking their orders. I attempted to be as much a consummate pro as Matt.

Four friends of mine came to see me (haze me?) behind the bar, and between them they brought four guests, so I was directly responsible for BXL having eight customers. That was appreciated. Matt said I seemed at ease behind the bar, and the Stella representative in attendance asked if I had ever been a bartender, because it looked like I was doing something I had done before. All that praise was nice to hear.

Here’s what Matt wrote to me the next day: “Having you come behind the bar with me this past Tuesday was not only fun, it was refreshing. Refreshing because I was encouraged to think about the things we do to honor the brewer and the beer, the history and the present that all comes with the ‘simple’ act of pouring a beer. Of course, after living in Belgium as a 17-year-old and being taught the proper way to draw the gold from the taps, then working for Duvel and finally being the Beverage Director for such an authentic Belgian bar, it is something that just comes naturally. I often forget what it takes to do it right, like we do.

“Pouring a head on a beer is the most natural thing a barman can do. It shows the quality of the beer, the cleanliness of the glass and the respect of the drinker. Sure, people complain from time to time about not getting a beer poured to the top, as I’m sure some people complain at an English pub for getting a ‘flat beer’ from a firkin. Some people just don’t know… yet. That’s our job, to inform any and all about the way it’s done.

“Yves Michaels, a Brussels native and owner of BXL and BXL East, had a wonderful idea to open an authentic Belgian bar in New York City more than six years ago. Ever since, New Yorkers have known that his are places to find legitimate, authentic atmosphere and service in New York. I personally feel much of that is in the way the beer is poured.

“Again, Gregg, it was great having you with us the other night. I encourage you to come back again anytime, as you’ve earned yourself a spot as an honorary barman at BXL!”

One of my buddies who came by was Peter LaFrance, who has been writing about beer for a long time. “Over the last 25 years, I’ve been lucky enough to view the world through the eyes of a journalist covering the beer beat. During that time, I’ve met some very interesting people. I watched one of them, a fellow journalist, work behind the bar the other night. It seems the major beer company thought it might be fun to watch a journalist behind the bar. We are supposed to know so much about beer — exactly how to pour, exactly what temperature it is to be served at and exactly how to present it to the customer. I can only assume the brewing company has a sense of humor. However, I can assure you that my friend had a very good sense of humor. In fact, the obvious interest he took in ‘trailing’ the professional bartender was most inspirational. His technique at the tap, with a number of different beers poured into a number of different glasses, was actually better than over half the bartenders in New York City. His presentation of the beers was closely monitored by representatives of the brewery. I didn’t notice any of them cringing.”

Anne (who “Likes Beer”) Becerra is a new friend of mine in the city. She’s a bartender at another good-beer bar, The Ginger Man. She also came to BXL to watch me work. “So, I dug the guest bartending gig at BXL. It’s always great to see someone behind a bar, especially at a beer bar where they know the products they’re selling and even better when they’re excited/passionate about them. If the whole newspaper thing doesn’t pan out, I’m sure Matt would have a job for you, otherwise you’re always welcome to come fill in for me.”

Chris Matthews is a friend I’ve traveled with to visit distilleries in Puerto Rico, as well as to many beer and spirits tastings in New York City. He writes about all things liquid (with alcohol in them, of course) for The Law Journal. “Practices makes perfect, and it was clear, even during my brief, two-beer stay at the bar, that you were starting to nail the correct (and tricky) levels of head-to-liquid as the orders kept pouring in. ‘Takes direction well’ would have been my report card comment.

“The condition of the beers was pristine — they obviously run a tight ship, with a lot of turnover — so you were certainly in the right place to hone your Belgian beer-tending skills.”

My other friend to come was Heidi Hoover, who works for Flanders Investment & Trade, part of the Consulate General of Belgium in New York City. “Always happy to support one of Belgium’s unofficial beer Ambassadors! It was really interesting/entertaining for me to see you behind the bar. It is no easy task to learn the ins and outs of pouring 15 drafts with very different pouring personalities. Belgian beer is always described as complex in flavor, but even the physicality of how that magic liquid leaves a tap and enters into a glass is beautifully complex too. They all seem to stand up and say, ‘I’m not like the last one, you need to give me special treatment or this relationship will end in foam!’

“I think most folks don’t give that part (pouring a Belgian draft) much thought, but being there as an eyewitness to your experience gives me a better appreciation for the craft of draught masters.”

I’m going to take Matt up on his offer and head back to BXL — and not just as a customer. I’m going to walk behind the bar and pour my own beer, those of any friends who are with me — and maybe for a few customers, as well.