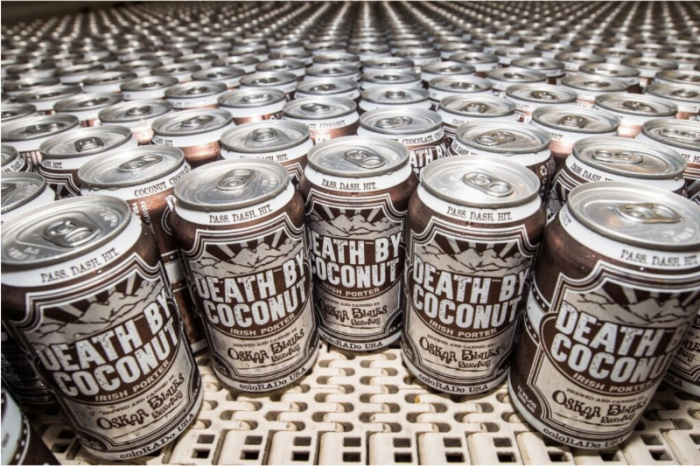 LONGMONT, Co. and BREVARD, N.C.—Oskar Blues Brewery shakes up the fall craft beer lineup with a national limited release of its rebellious take on the traditional Irish Porter, Death by Coconut, starting this month and while supplies last.

Death by Coconut (6.4% ABV/25 IBUs) is a semi-sweet porter made from loads of dark chocolate and extra dark caramel malt. It pours a rich velvet black with a frothy head and exudes intense fresh cacao flavors swirled with popping coconut aromas.

Death by Coconut is an easy-drinking, big-flavored beer that is reminiscent of sweet treats, which is no wonder given it is brewed with Cholaca out of Boulder, Colorado. Cholaca is a form of pure liquid chocolate that contains only three ingredients: cacao, water and coconut sugar. Cholaca adds a rich and smooth chocolate touch that makes this beer liquid perfection. Using only fair-trade cacao beans sourced from select farms in Ecuador and Peru, Cholaca gives it the most authentic flavor kick.

Death by Coconut, awarded the 2014 GABF Silver Medal in the Chocolate Beer category, hits shelves nationally in 4-packs of 12-ounce CANS and will also be available in 19.2-ounce cans in the Colorado and North Carolina markets. Look for it in limited release on tap starting in October as well.

Founded by Dale Katechis in 1997 in Lyons, Colorado, Oskar Blues Brewery launched the craft beer-in-a-can apocalypse with hand-canned, flagship brew Dale’s Pale Ale. Today, Oskar Blues is one of the fastest growing independent breweries in the country and operates breweries in Longmont, Colorado and Brevard, North Carolina, producing more than 150,000 barrels in 2015. The original canned craft brewery currently distributes to 44 U.S. states, Washington, D.C., as well as parts of Canada, Sweden, and the U.K.

In 2013, Oskar Blues founded the CAN’d Aid Foundation, a 501(c)(3) nonprofit public charity that offers grassroots grants to those making a difference in the areas of community, the environment, music, and more. To keep up with all things Oskar Blues, visit http://www.oskarblues.com.