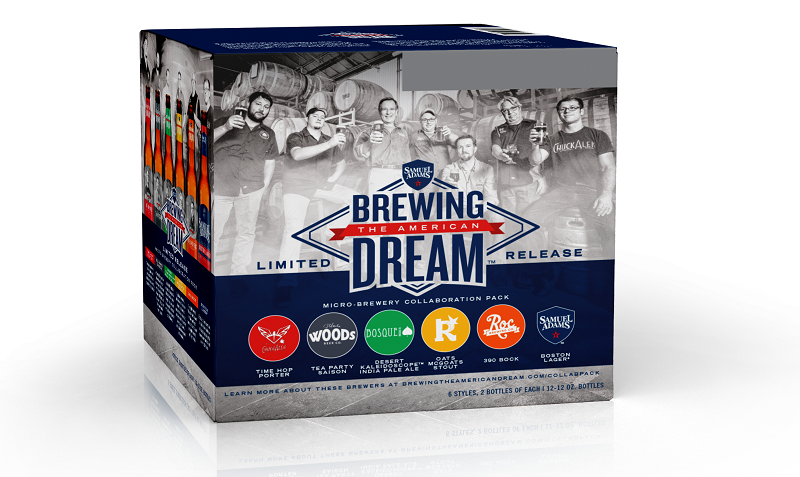 BOSTON–To celebrate the independent and entrepreneurial spirit of the craft beer industry, Samuel Adams has collaborated with five different breweries across the country to brew a limited release 12-pack for the first-time ever, aptly named The Brewing the American Dream Collaboration Pack. From bartenders to chefs, the collaborative spirit of “craft” is stronger than ever.  No industry better exudes this spirit than the craft brewing community, where independent brewers put aside competition to collaborate creatively and challenge each other to push the envelope.

Unlike any other beer collaborations before, this pack features brewers who are part of Samuel Adams Brewing the American Dream, the brewery’s signature philanthropic program. Nearly a decade ago, Sam Adams created Brewing the American Dream to provide loans and coaching to craft brewers and small business owners pursuing their passions and the American Dream of starting their own business. All profits from this collaboration pack will be donated to non-profit program partner and small business lender Accion to support loans to food and beverage entrepreneurs nationwide.

“This pack represents the independent spirit, passion and collaboration that is core to our craft beer industry,” said Sam Adams founder and brewer Jim Koch. “We’re proud to have collaborated with these creative and passionate brewers in a way that allows us to continue to pay it forward and empower fellow independent craft brewers to be successful and to grow.”

ThreeNinety Bock is a slightly roasted Maibock with a sweet toffee and light caramel flavor, crafted from four hop varieties, combined with rye malt and oak smoked malt. Mosaic and Hallertau Mittelfrueh hops provide the balance that gives this dark golden bock a big, juicy character and slightly sweet and dry finish. ThreeNinety is a nod to the distance in miles between Boston and Rochester.

“Over the past 6 years with the help of Brewing the American Dream we took our business from a home brew hobby to a fast-paced brewery with 4 full-time employees and 8 part-time employees,” said founder Chris Spinelli.

Desert Kaleidoscope, pays homage to the Albuquerque balloon fiesta and features a mixture of flavors including citrus, tangerine, pine and honey malt to create a brew with a bold, hoppy aroma. With a 7.0% ABV, Desert Kaleidoscope is a deep amber, medium-bodied brew that leaves a clean touch of lingering bitterness on the palate.

“Nearly five years ago, we set out to provide great jobs and be an integral part of the craft beer community we love.” said Founder Gabe Jensen. “We currently have 90 co-workers that we are thrilled to be both learning from and growing with as a company -this is what inspires us.”

“We were at a cross roads with our brewery when we met with Jim Koch, and after our conversations we knew exactly where to take the business,” said Founder and Brewer Grant Fraley.  “When we opened our second location in 2016 we saw over 300% growth in revenue.”

“Our loan from the program helped us build a brewpub and four tasting rooms, and pursue more innovative collaborations like this one,” said Woods founder and brewer Jim Woods. “That creative, supportive spirit is the best part of this industry.”

Oats McGoats is an American stout brewed based on founder and brewer Rick Abitbol’s commitment to brewing full-flavored, gluten-reduced beers (if they didn’t say it, you wouldn’t know). At 6.5% ABV, the full-bodied, moderately carbonated beer is accented by earthy, spicy flavors and a hint of roasted coffee notes.

“The best advice we’ve gotten has been from our friends at Sam Adams!”, said founder Rick Abitbol. “If we hadn’t gotten our loan, we wouldn’t have been able to open our doors.”

Samuel Adams Boston Lager is the original collaboration beer between Jim Koch and his father, using his great-great grandfather’s recipe – helping lead the American craft beer revolution and reviving a passion for full-flavored beer. Only the finest hand-selected ingredients are used to create this perfectly balanced and complex original brew, including two-row malted barley and Bavarian Noble hops. Boston Lager is full-flavored with a balance of malty sweetness contrasted by hop spiciness and a smooth finish.

AVAILABILITY: The Brewing the American Dream collaboration 12-pack will be available nationwide with limited availability for a SRP of $16.99-19.99 starting in late-July. For more information, visit www.brewingtheamericandream.com/collabpack.

Jim Koch first brewed Samuel Adams in his kitchen in 1984 and in his pursuit of a better beer, he ignited the craft beer movement, inspiring a whole new beer category that’s produced millions of jobs in communities from coast-to-coast. Jim launched the Brewing the American Dream philanthropic program in 2008 to give back to the community in which he started and help small business owners and fellow craft brewers pursue their passion and achieve their American Dream.

“Two thirds of new jobs in America come from small businesses, but entrepreneurs – especially those in the food and beverage industry – often lack the cash, training and networks essential for success,” said Gina Harman, CEO of Accion U.S Network. “With the support of Samuel Adams and Brewing the American Dream, we help entrepreneurs overcome previously insurmountable obstacles – like accessing start-up capital to open a brewery.”

Since the launch of the program, Sam Adams and Accion have worked together to counsel more than 8,000 small business owners and provide more than 1,300 loans totaling nearly $18 million to 1,000 small businesses that have gone on to create or retain over 5,300 jobs across America. The program has provided nearly $1 million in loans to 40 small craft brewers.

About Samuel Adams and The Boston Beer Company

The Boston Beer Company began in 1984 with a generations-old family recipe that Founder and Brewer Jim Koch uncovered in his father’s attic. Inspired and unafraid to challenge conventional thinking about beer, Jim brought the recipe to life in his kitchen. Pleased with the results of his work, Jim decided to sample his beer with bars in Boston in the hopes that drinkers would appreciate the complex, full-flavored beer he brewed fresh in America. That beer was aptly named Samuel Adams Boston Lager, in recognition of one of our nation’s great founding fathers, a man of independent mind and spirit. Little did Jim know at the time, Samuel Adams Boston Lager would soon become a catalyst of the American craft beer revolution.

Today, The Boston Beer Company brews more than 60 styles of beer. It relentlessly pursues the development of new styles and the perfection of classic beers by searching the world for the finest ingredients. Using the traditional four vessel brewing process, the Company often takes extra steps like dry-hopping, barrel-aging and a secondary fermentation known as krausening. The Company has also pioneered another revolution, the “extreme beer” movement, where it seeks to challenge drinker’s perceptions of what beer can be. The Boston Beer Company has been committed to elevating the image of American craft beer by entering festivals and competitions around the globe, and is one of world’s most awarded breweries at international beer competitions. As an independent company, brewing quality beer remains its primary focus. Although Samuel Adams beer is America’s leading craft beer, it accounts for only one percent of the U.S. beer market. The Boston Beer Company will continue its independently-minded quest to brew great beer and to advocate for the growth of craft beer across America.

About Accion in the U.S.

Accion creates economic opportunity by partnering with small business owners to provide access to capital and business support to grow healthy enterprises and contribute to thriving local economies. Accion is a nationwide network of mission-based lenders combining deep local knowledge with cutting-edge lending solutions and unmatched personalized advising. Since 1991, Accion has provided more than 60,000 loans totaling more than $500 million to businesses that collectively have generated and sustained more than 22,000 jobs across the U.S. For more information on Accion small business loans in the United States, please visit https://us.accion.org.