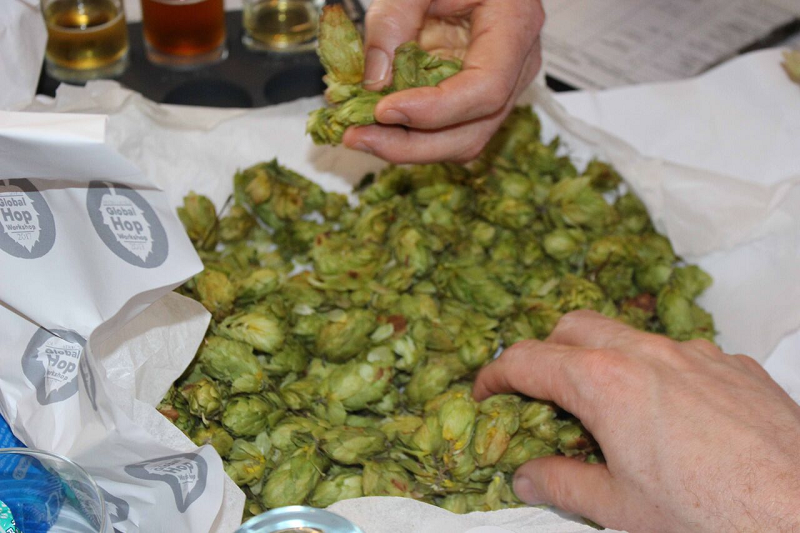 Unless you’ve been living under a Wi-Fi-free rock for the past week, you will no doubt have already read about the South African hop saga.

Last week, beery social media was alive with the story that Anheuser-Busch InBev had commandeered the entire South African hop harvest, meaning that U.S. microbreweries keen to experiment with new hops would not be able to buy any South African varieties. Since acquiring SABMiller in 2016, A-B InBev now owns SAB Hop Farms (SABHF) and its proprietary hop varieties, which include Southern Passion, Southern Star and African Queen.

The story was broken by Colorado-based hop broker Greg Crum, owner of ZA Hops. In an email to clients, which was later shared on Proclamation Ale Co.’s Facebook page, Crum wrote “ABI are commandeering all the hops that were to be allocated for distribution to North American craft brewers. The goal is to sell the hops internally to their acquired (former) craft breweries, even though they have not been able to sell all the hops as of yet. Regardless, they refuse to let US craft brewers buy any CY 2017 hops believing this will afford them a competitive advantage in an increasingly competitive marketplace.”

“This year, South Africa suffered from low yields,” wrote Willy Buholzer, A-B InBev’s global hops procurement director. “Previously, SAB has sold a small surplus of locally-grown hops to the market. Unfortunately this year we do not have enough to do so given the poor yield. More than 90 percent of our South African-grown hops will be used in local brands Castle Lager and Castle Lite, beers we’ve committed to brewing with locally-grown ingredients. In support of the local industry, we additionally sell hops to South African craft breweries.” He went on to explain that less than five percent would be allocated to other A-B InBev breweries outside of South Africa.

Twitter feeds and comments sections were quickly filled with people denouncing the move. “Today we learned AB InBev is cutting-off all indie breweries from buying South African hops,” tweeted Modern Times. MarketWatch led with a headline proclaiming that A-B InBev was shutting out craft beer brewers by “hoarding hops” and went on to say that of the 1.81 million pounds of hops produced last year, “it’s all gone to Anheuser-Busch InBev”.

But this isn’t quite accurate. What every article has overlooked is that while American brewers, for now at least, can’t get their hands on South African hops, there are microbreweries that can—in South Africa. The country now boasts almost 200 microbreweries, a number that has increased from just 50 in 2013.

While some brewers utilize imported ingredients, many rely heavily on SAB—and now A-B InBev—for both malt and hops. The question of ingredients was of particular concern to South African microbrewers when the takeover was in progress last year, but their fears were somewhat assuaged by a clause in the agreement stating that “the Merged Entity shall continue to supply hops that are currently supplied by SABMiller to Small Beer Producers on the same terms and conditions as currently offered by SABMiller or otherwise on reasonable commercial terms.” The supply of malt was similarly protected, albeit only for five years.

So what do South African brewers make of the recent spotlight shone on their hop scene? Are they concerned that they too will see their hop supply shut off?

“I am concerned about volumes,” says Eric van Heerden, owner of Triggerfish Brewing. “I think that they’ll never cut the small independents off completely but can throttle our supply without any recourse.”

Van Heerden has used local hops in some of his beers since the brewery’s inception seven years ago. He explains that local brewers rarely get the allocation of hops they ask for.

“Last year we only got a portion of what we asked for on Southern Passion and I know that some was exported,” he says. “The process is not transparent at all so I assume their own breweries get what they need and we get the balance.” 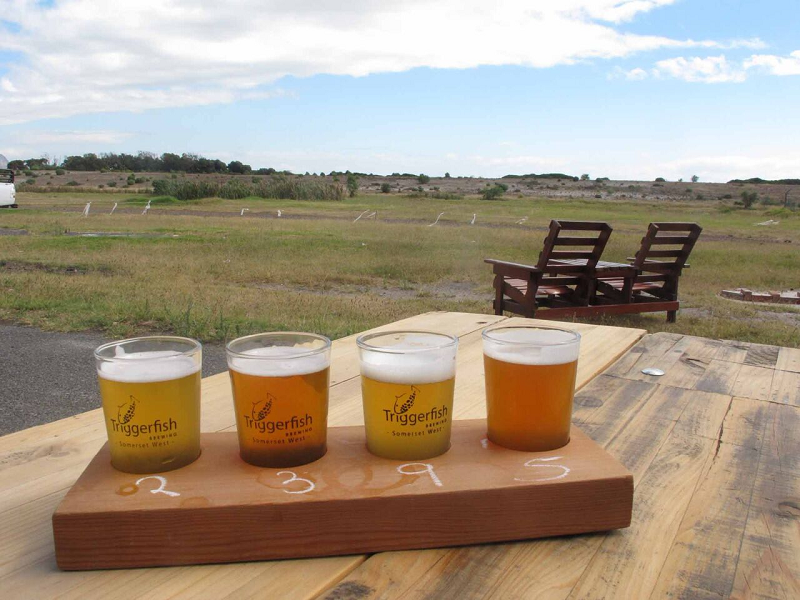 A flight of beers at Triggerfish Brewing. (Photo by Lucy Corne)

Other brewers have confirmed that orders are rarely fulfilled, reporting that they have sometimes received as little as 10 percent of the amount ordered. Marc Fourie, owner and brewer at Riot Beer, says that forward contracts don’t exist in South Africa—brewers simply have to wait and see how much they are allocated by SAB Hop Farms.

“Their reasoning is that they want to give everyone some hops,” explains Fourie, who expresses his deep frustration with the system and the “complete disorganization on a client service level.” Indeed, other brewers have had to alter their recipes to cut down on local hops since they never know if the hops will be available. South African brewers are expecting to hear about their 2017 allocations this week. 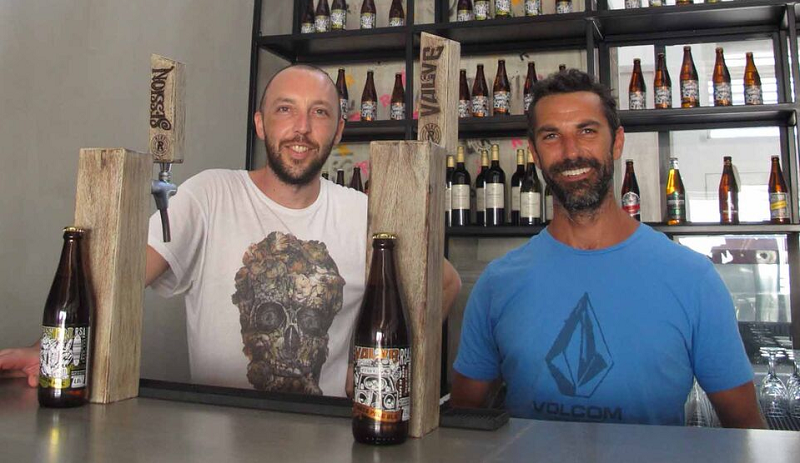 Some South African brewers—particularly those that rely entirely on local ingredients for their brews—have expressed surprise at the fact that local hops were being exported at all. “I think it’s great that SABHF do in fact commit to supply South African craft breweries before shipping to the U.S. craft breweries,” says one brewer who preferred to remain anonymous. “I think a lot of local brewers were upset last year when they got 10 percent of their allocation on some varieties only to find that some of that very variety had been exported to the US.”

Just why the allocations seem to be so hit or miss is not known, although A-B InBev’s statement does seem to hold some water. The southern region of South Africa has been suffering a serious drought since late 2016, with major water restrictions in place in some areas. One local hop farmer —a supplier to SAB Hop Farms who asked not to be named —said that the weather has had a serious effect on this year’s crop, which was harvested in February.

“This year we had the worst yields in many years because of the drought,” he says. “I was down over 50 percent in one field and not much better in my others. Our industry was down a lot this year, so it’s to be expected that there would be a huge shortage of hops.”

Crum anticipated that he would import 20 metric tons this year after bringing in 8.3 metric tons to the states last year. Since 2012, Crum has slowly created demand for varieties like Southern Passion and African Queen among U.S. brewers.

SABHF released the following statement regarding the supply to overseas hop buyers:

In March 2017, as the South African harvest drew to a close, A-B InBev hosted its annual hop workshop among the hop fields of the Outeniqua Valley, the only region of South Africa with a suitable climate for hop production. During the event, A-B InBev announced it would be expanding the hop farms by 100 hectares and upping production from 850 metric tons to 1,000 metric tons. Most interesting though, was the announcement that 250 metric tons per year would be reserved for export. It’s highly likely that this allocation would go to A-B InBev’s breweries throughout Africa as well as the acquired microbreweries in A-B InBev’s ‘The High End’ portfolio. 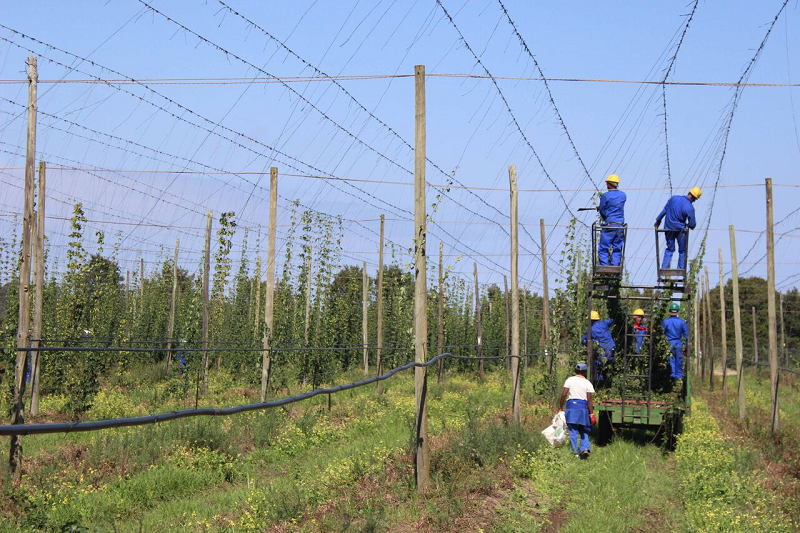 Indeed, brewers from A-B InBev’s acquisitions around the world were flown down to South Africa for the workshop and given the chance to tour the hop farms and most importantly to sniff and sample the hops in the SABHF stable. Brewers also toured the experimental hop fields to check out what SABHF has lined up for the future.

When all is said and done, this furor was never really about South African hops. Few international breweries use them and even then only in one-off or occasional beers. Of course, craft brewers are always looking to innovative, but I doubt anyone will be truly mourning the loss of their Southern Passion Pale Ale or African Queen IPA when there are so many other great hops out there.

The fallout is more a matter of principle—the principle of A-B InBev attempting to control the supply of ingredients to the industry, a question that some posed after the company recently announced plans to acquire Wicked Weed Brewing of Asheville, North Carolina. And as worrying as this is to small brewers in the U.S., it’s infinitely more of a concern to South African brewers, whose remote location and weak currency make at least a partial reliance on these ingredients a key part of their survival.

Lucy Corne is a beer writer based in Cape Town, South Africa. She has authored two books on the South African beer scene and pens the popular beer blog The Brewmistress.