All About Beer Magazine's Beer from the Source
February 13, 2018 Sara Pletcher 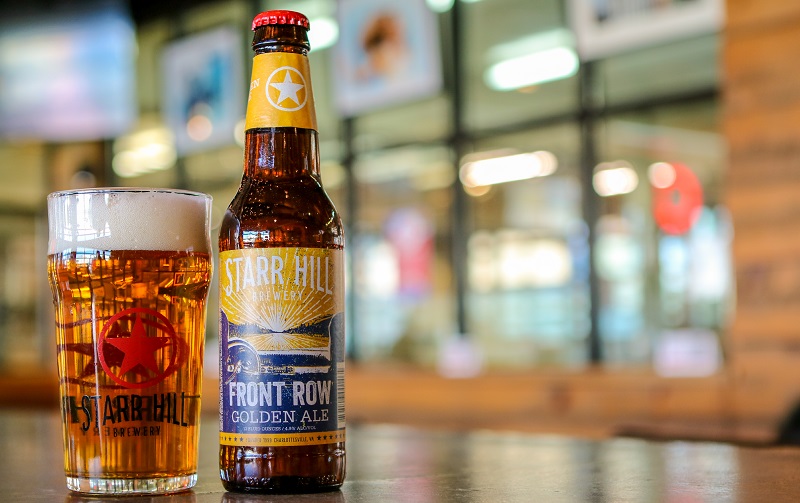 For a craft beer fan, there is really nothing more enjoyable than listening to great live music outdoors and enjoying a refreshing and sessionable craft beer. That’s why, in true Starr Hill fashion, the Virginia-based craft brewery is releasing its new Front Row Golden Ale just in time for the coming warmer months.

“Front Row Golden Ale is a great beer for hot days as a crisper, cleaner, and more refreshing alternative to an IPA,” Jack Goodall, Starr Hill’s Marketing Manager, explains. “But, almost more importantly, Front Row is an homage to our roots.”

Starr Hill Brewery, founded in 1999 by Mark Thompson, began at the former location of Blue Ridge Brewing Co., Virginia’s first craft brewing operation. Thompson turned the historic storefront on Charlottesville’s Main Street into a bustling brewery once again with the Starr Hill Music Hall. Offering live music and local craft beer from 1999-2005 was the mission. Outgrowing that original space led to a brewery expansion with a taproom in Crozet, Virginia; however, the live music stage was not left behind. The Crozet taproom offers live music every weekend and pulls acts from Virginia, North Carolina, and beyond. It was here that Starr Hill became the first production craft brewery in Virginia, focused on shipping beer around Virginia and beyond.

Ensuring its connection to live music, Starr Hill’s beers can be found in every major music venue in Virginia. This includes Wolf Trap (NoVA/D.C.), The National (RVA), The Jefferson and Sprint Pavilion (Charlottesville), NorVA and Portsmouth Pavilion (Norfolk), and more. Bonnaroo and FloydFest-goers have even had the privilege of drinking Starr Hill beer since the very first concerts in 2002. So, it was only a matter of time before they created a second flagship beer, paired alongside Northern Lights IPA, and gave it a strong music-centric name that also encourages the drinker to treasure life’s incredible moments. 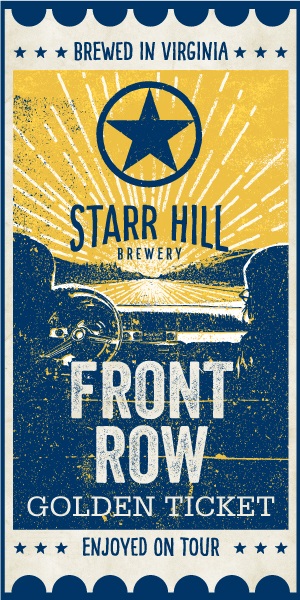 “The name Front Row not only comes from the music connection, but a celebration of savoring life’s moments in-person and sharing the experience with others,” says Goodall. “[It] could be a concert, a sports game or just hanging with friends—just being present and doing what you love [is] what matters.”

Coming in at 4.9% ABV, Goodall sees the Front Row Golden Ale as an approachable gateway beer for those who are not huge craft fans, but a quality beer that craft fans can appreciate, since it’s not too hoppy or sweet.

“Similar to a blonde ale or Kölsch, golden ales are currently the fastest growing style in the industry,” Goodall states.  “Our Front Row Golden Ale is a single Cascade hop beer with pilsner, caramel, and honey malts with oats.  It is very balanced and light, yet still full of flavor.”

“We originally brewed this Golden Ale for the summer music festival season last year, and it just took off,” says Robbie O’Cain, brewmaster at Starr Hill. “Front Row is a classic, approachable beer that we’re really excited to share.”

To kick-off its new flagship beer release and just in time for summer music festival season, Starr Hill plans to sell Front Row Golden Ale in every Virginia music venue. The brewery has also launched a Golden Ticket giveaway. By answering the question “Where’s your #FrontRow?” with a photo, craft beer fans can enter to win $50 Stubhub gift cards or the grand prize, a Front Row Tour Pack, which includes all the road trip essentials, like a GoPro, Hydroflask growler, festival blanket, Starr Hill swag, and a $250 Stubhub gift card, all valued at $1,000.  Fourteen $50 Stubhub gift cards will be given away every other week with the grand prize drawing this summer. Contestants can enter at starrhill.com/golden-ticket and by tagging Starr Hill for a chance to win.