All About Beer Magazine's Beer from the Source
September 18, 2018 Bryan M. Richards

“We call our restaurant the Snack Bar because it’s reminiscent of liking snack bars as a kid,” says John Trogner, who with his brother Chris founded the brewery in Hershey, Pennsylvania. 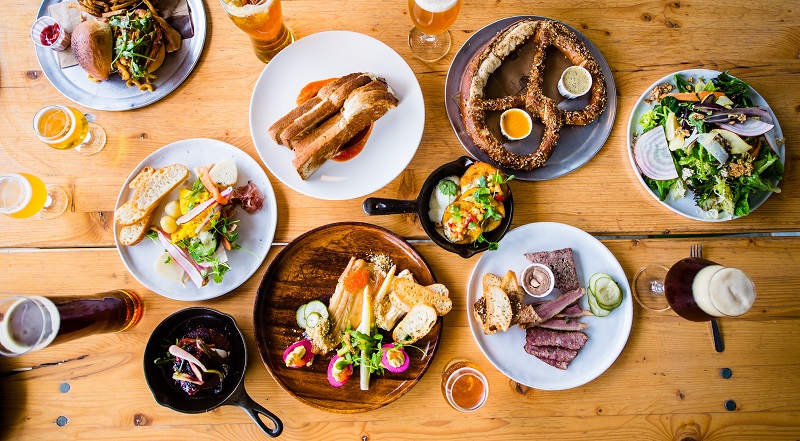 Don’t let the name fool you though, what’s served at the Snack Bar is anything but the hot dogs sitting under a heat lamp found at most snack bars. Think serious yet playful dishes like little neck clams topped with house bacon, heirloom tomatoes, fresh corn and pesto, or beef tongue tacos finished with tomato salsa, crème fraiche and cilantro. If snack bar food is truly what you desire, look for the foie gras corndog that occasionally graces the menu as a special.

“We develop our Snack Bar menu items much like we do beer recipes with our Scratch Series,” says Trogner. “It’s our way of constantly experimenting and moving forward.”

Each month, Tröegs releases anywhere from three to eight Scratch Beers, many of which tie in seasonal ingredients found within a hundred miles of the brewery, an area dubbed Pennsylvania’s Fruit Belt. This use of seasonal ingredients—often harvested with the help of Tröegs’ employees—allows Tröegs to add terroir to those beers. The beers that garner the best response will be developed through future Scratch releases.

A popular example of a beer that came from this process is Hop Knife IPA.

“That first smell of Hop Knife, when I crack open a bottle, takes me right to the hop fields in Yakima,” says Trogner. “When we’re out there for harvest, walking the fields and talking to the farmers, those notes of citrus, pine, and tropical fruit are everywhere. For me, Hop Knife embodies that whole experience.”

“We started brewing easy beers and that didn’t go so well. Then we thought, if we’re going down, we might as well have fun doing it,” says Trogner. “Our brewery’s success was built on taking a risk with beer.” 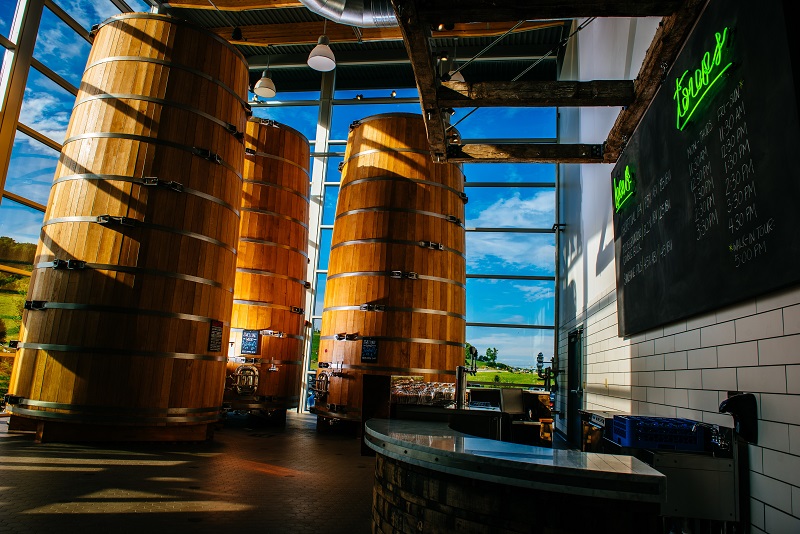 Each season Tröegs’ creative food team comes up with ideas for the Snack Bar menu by looking at what beers are available and what’s available at local farms. A kitchen team member then takes the ideas, creates recipes, and serves the dishes to the team. Items that make the cut are then tested as specials for customer reaction.

“We are fortunate to have a lot of people with the same mindset—that are smart, passionate, and want to experiment,” says Trogner. “That also makes us our hardest critics.”

This fall, expect a hearty menu of Pennsylvania Dutch comfort foods with a Tröegs twist, like a braised brisket sandwich on brioche with mustard slaw and house steak sauce and duck confit with creamed corn polenta, blistered tomatoes, hot pepper jam and frisee.

“Food that’s fun and interesting, yet accessible for those who may be afraid to step outside the box,” says Matt Lett, executive chef of the Snack Bar. “At the end of the day it’s just food. Our job is to make sure people are fed well and have fun.” 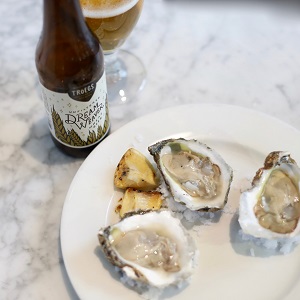 The brewery’s experimentation with beer and food isn’t limited to the taproom. The brewery helps fans experiment with the intersection of food and beer via their Food Notes program. Available at the taproom and on the company’s website are flyers that highlight which flavors complement, contrast (in a good way), and act adversely with their flagship beers.

“It’s how we teach customers to translate food memory as clearly as possible,” says Trogner.

Pair a complementary piece of fresh mango with Perpetual IPA and notice how the fruity esters from the hops are even more pronounced, or a contrasting piece of basil with Dreamweaver Wheat Beer for an anise nuance that’s reminiscent of an old world cookie. On the adverse side (and something you probably don’t want to try), pair a sour pickle with Troegenator Double Bock for a garlic flavor that unpleasantly lingers on the tongue.

“It shouldn’t be pretentious,” says chef Lett. “A group of friends can get together and do this.”

The Snack Bar is only the tip of the iceberg for all that Tröegs has planned for the future of the brewery’s kitchen. In the works is a house-cured charcuterie program that will be unrivaled elsewhere in the country, with menu items like coppa, saucisson sec, guanciale, wild-fennel tenderloin and duck prosciutto, all from pasture-raised animals from a farm owned by a former Tröegs’ brewer.

“Don’t be surprised if you find an aquaponics farm at the brewery using rain run-off from our building,” adds Trogner. It’s all in an effort for Tröegs to revolutionize food much like they did beer. 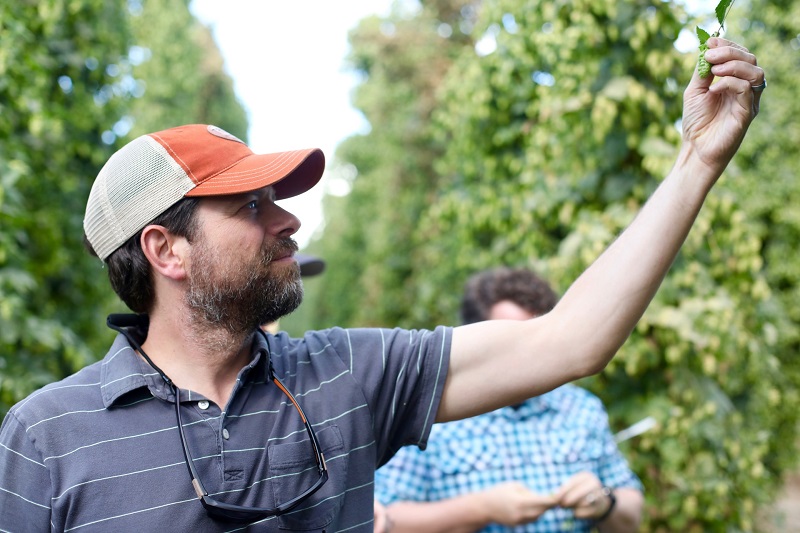 For now, though, be on the lookout for the very limited, once-a-year Golden Thing Double IPA release, which hits shelves and taps Oct. 1 and highlights the Lemondrop hop the brew team discovered on their last harvest visit to Yakima Valley.

Bryan M. Richards is a beer, food, and travel writer based in Charlotte. His work has appeared in All About Beer, Men’s Journal, and just about anything with the word Charlotte in it. Follow his adventures on Instagram at @brichwrites.