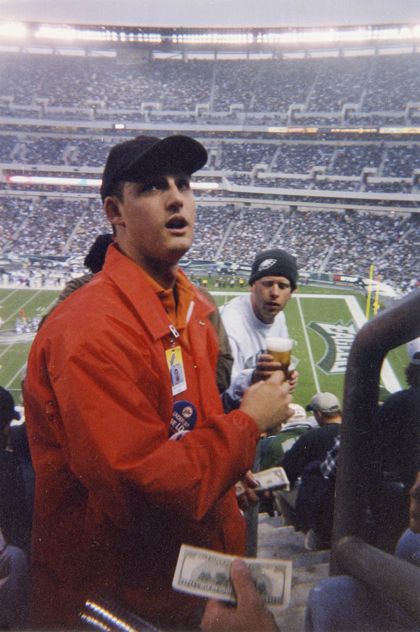 Growing up in a family with three Heisman Trophy winners and NFL running backs (John Cappelletti and, through marriage, Alan Ameche and Glenn Davis), I never had to go far for my football fix. Games, memorabilia, awards banquets—I was blessed to have intimate access to a sport I loved. But it wasn’t until I left those privileges at the front gate and strapped two cases of beer around my neck that I learned what it really means to be a part of the football experience.

It was late summer 2004. I was a year out of college and, after a short stint in the travel industry, had moved home to Philadelphia with a blank calendar and some souvenirs. At the same time, my favorite team, the Eagles, were poised to win the NFC East and, some were saying, the Super Bowl. I wanted in on the action. My first instinct was to apply for a marketing job and hope for game-time perks, but the team wasn’t hiring. I considered going the George Plimpton route and asking to be the team’s last-string quarterback, but an acute fear of having my legs broken by 300-pound linemen prevented me from even making the call. Then a friend told me about another way in. It involved barley, water, hops and lots of sweat.

This was the era before craft brews hit the stadiums, so the only choices were Budweiser, Bud Light, Coors Light and Miller Lite, the canned kings of sports arenas nationwide. Because Philadelphia fans have shown a tendency to throw things in the stands (batteries, snowballs, bottles, tantrums), every beer had to be poured into a plastic cup—a seemingly simple task. But while trudging up and down the aisles, stopping only to kneel amongst puddles of dip spit and the remains of peanut shells as 65,000 beer-thirsty fans scream in unison, “Hey! Beer Man! Gimme two!” pouring those 16-ounce tallboys is not so simple.

During the first game, perched high atop the upper deck (or the Nest of Death, as diehard fans call it), I fell victim to the wrath of carbonation three times. The frothy head spilled over the rim of the cup and onto the concrete steps below.

I expected to hear how many beers he wanted.

I most definitely did suck. But over the course of the game and throughout the season I learned from my mistakes. I learned to respect the beer, to slow down, making sure that each pour was perfect. Tips increased. I learned that real Beer Men don’t just offer beer; they also sell it with phrases like, “The more you drink the better they play!” peppered in with the traditional, “Beer here! Ice cold!” When temperatures dropped, avoiding the term “ice cold” altogether is sometimes best.

The Beer Men set the tone in the stands and, if done with the right amount of panache, the fans respond in kind. They want to buy from a guy who is quick, competent, but who adds a little something to their experience—someone they’d want sitting next to them. Even in the Nest of Death a good smile goes a long way.

For once, beer got me off the couch. I showed up early for games to hang out with the other vendors: from the 18-year-olds out for some spending money to the pros who sold for all sporting events and concerts, or the guys for which selling beer was their second or third job. I gained a tremendous amount of respect for all of them and their backbreaking work.

By the end of the season, when the fireworks went off and Eagles won their first NFC Championship in 24 years, I had sold more beer, had more fun and connected with more fans than I had ever imagined. A few times I was even the focus of a full section “Beer Man!” chant. I was filled with pride, barely able to control my emotions, running around, high fiving strangers and jumping up and down as if I’d scored the winning touchdown myself. I even hugged a security guard.

As I have moved on to other jobs, the résumé bullet point about being a Philadelphia Eagles Beer Man has been the most commented on. I always smile when it is mentioned and embrace the irony that even when the discussion should be about my “actual” employment history, people really just want to talk about selling beer. Then I’m back in 2004, a humble servant of the fans shouting throughout the stands and into the heavens, “Let there be beer. And let it be ice cold.” Tips are appreciated.