Once again, the fall seasonals have come and gone. Pumpkin and fresh hop ales, both of which fit the bill of “harvest” beers, have recently become eagerly anticipated offerings for many. But it is the venerable Märzen/Oktoberfest genre that has served autumnal revelers for centuries. Märzen, the historical designation, was made in the waning cool of spring; Oktoberfest, the more recent appellation, was brewed to savor during the changing season. They have come to be the essentially interchangeable names for the evocative burnished-gold to coppery, malty lagerbiers that favor brisk weather and festive ambience. They represent a lineage of adaptation, innovation and cooperation. Rooted in Germany, Austria, and even England, this stylistic transformation coincided with the explosion of brewing technology and regional style development during the mid-19th century.

Before refrigeration, beer was often made only from autumn into spring, as summer conditions were a bit risky for fermentation. Beer made in March, the last practical month for brewing, was stored and consumed when mature in summer, fall and beyond. Top-fermented Belgian Bière de Mars (March beer in French) follows this script. In Germany, the beers were known as Märzen (simply, March) and bottom-fermented, though it is hard to decipher how extensively that term was applied. With the serendipitous blessing of the crisp Alpine climate, Bavarian brewers alone developed and employed bottom fermentation, making use of caves and cellars, sometimes packed with ice for lagering.

Bavarian lagerbiers were dark (dunkel), Märzen included, and made exclusively with the well-kilned malt that essentially defined their bier, known today as Munich malt. Notably, nearly all beers were dark before the 19th century, except for a few regional specialties, mostly in Northern Europe, that used raw grains or air-dried malts.

The British, on the other hand, had been making kiln-dried pale malt since the mid-17th century. The eventual cross-pollination of British and Central European ideology and technology helped spark the invention of pale lagers, most famously in Plzeň, that would revolutionize modern brewing. In Vienna and Munich, it led to the lagerbiers that would fuel the biggest beer bash of them all, Munich Oktoberfest.

By the early 19th century, Gabriel Sedlmayr I of the Spaten Brewery in Munich had become something of a guru among brewers for his expertise in bottom-fermenting techniques and yeast management. His son and apprentice, Gabriel II, spent a lot of time in Britain, learning malting methods in London, Burton Upon Trent and Edinburgh, cities known for exceptional pale ale. Accompanying Sedlmayr on his excursions was comrade and fellow brewer Anton Dreher of the Schwechat Brewery on the outskirts of Vienna.

This period saw a boom in innovative malting technology, especially with the invention of efficient and, for the era, ingenious malt kilns. Gabriel II, who took over the brewery in the late 1830s, started to make better Munich-style malt with these innovations, and not pale malt. Sedlmayr was mentor to Dreher in the ways of bottom-fermentation, which Dreher was interested in implementing at Schwechat. Unlike Sedlmayr, Dreher wanted to fashion pale malt to make lagerbier the color of pale ale, combining the best features of Bavarian and English brewing.

Dreher created pale malt that was lighter than the Munich type, but darker than the golden version of nearby Plzeň, Bohemia. Dreher’s amber Schwechater Lagerbier was introduced in 1841, a year ahead of Pilsner. His malting specification cast the template for the many amber lagerbiers that followed. Pilsner-style lagerbiers swiftly took Europe by storm, while the Vienna type remained more or less a local brew. Munich brewers were focused on refining dunkel, and it would be another 40 years before they strayed from that legacy. By the time Schwechater Lagerbier was introduced, the Oktoberfest celebration was already 30 years old. How, then, did amber lagerbier become known as Oktoberfest and Märzen?

The first Oktoberfest was a communal celebration of the marriage of Crown Prince Ludwig (later King Ludwig I) of Bavaria and Princess Therese von Sachsen-Hildburghausen. It was held just outside Munich and attended by both royalty and citizens. The epic event started on Oct. 12, 1810, and lasted five days. The festival grounds were named Theresienwiese, or Therese’s Meadow.

The festival became an annual event, a celebration of autumn, harvest and agriculture. The timing was perfect for tapping that year’s locally brewed Märzen—still a dark beer, suitably aged and in prime condition for fall consumption.
By the 1870s, Josef Sedlmayr, Gabriel II’s brother and brewer at Franziskaner (today part of Spaten), was keen to the changing landscape, noting that lighter beers were becoming quite popular. The Sedlmayrs were among the most prominent brewers in Munich, and the penchant for tinkering was apparently an inherited trait. Josef got busy working on a Vienna-style lagerbier, finally hitting his mark and rigorous standards in 1871. He brewed it the following March and introduced it in 1872.

It was poured in the Schottenhamel Banquet Tent by Michael Schottenhamel, a carpenter from the Palatinate who erected a small barn on the Theresienwiese in 1867. Called Franziskaner-Leistbrauerei Ur-Märzen (original Märzen), it was pricey, but sold like crazy. The newly stylized beer was hastily copied by other Oktoberfest brewers and soon enough became the event’s signature brew.

With the development of refrigeration about the same time by Karl Von Linde in Germany, brewers were able to make beer year round, rendering the literal, traditional definition of Märzen moot, but useful as a simple stylistic designation. Märzen became identified with amber lagerbier because of the festival, and by default, both it and Oktoberfestbier became synonymous.

The Schottenhamel barn still stands, the venue where Spaten Ur-Märzen is served. The ceremonious first keg is breached there by the mayor of Munich. Only six breweries pour festbier at the event. All of them are located in Munich, a steadfast requisite.

Märzen and Oktoberfest are far and away the featured representatives of the amber lagers, with true Vienna lagerbier far less common. Vienna is largely brewed as a year-round beer (Sam Adams Boston Lager, Sprecher Amber and Great Lakes Eliot Ness represent the style well). In general, it is less robust than Märzen/Oktoberfest, but shares the amber color and malty framework.

Märzen/Oktoberfest is almost always offered as a seasonal, capably capturing the transitional autumnal shift from crisp lighter summer fare to hearty winter warmers with a flush of lightly toasted, spicy malt flavors, medium body and the signature clean lagerbier palate. The bright, glowing golden and copper-orange hues are a colorful metaphor of the palette of fall landscapes. It should noted that most Oktoberfest brews made for wide distribution carry the amber tones, whereas some of those made specifically for the Oktoberfest itself or the domestic German market are made to more golden specifications. This transition from amber to golden was a done by some to imitate the popular pale lagers during the 20th century.

Mostly, North Americans will encounter the seasonal amber versions of Märzen/Oktoberfest made for export. They are expressively rich with the flavor, aroma and color of Vienna- and Munich-style malts. The more intensive kilning deepens the color and contributes a significant, tasty bump of juicy melanoidin-rich, toasted malty sweetness, creamy but lean mouthfeel and spiciness. Both of these flavorful base malts are true to their predecessors of the 19th century. Märzen/Oktoberfest may be made with a combination of these malts or from a single, specific kilning. Those that lean golden may contain a fair measure of pilsner malt along with Vienna or Munich. The innovations in malting developed over the past 200 years are evident not in highly kilned varieties, but instead in the subtleties of these lightly modified malts and the nuance that they bring to the wort, and ultimately, the complex and graceful aroma and flavor. It is only fitting that the trio of Pilsner, Vienna and Munich malts, named for their cities of origin, which were born and came of age together, have a hand in the profile of Märzen and Oktoberfestbier.

Hop rates are restrained, but there is no mistaking the noble German aroma and flavor that marries ever so perfectly with the malty foundation. Strength is in the 5.5 to 6.5 percent ABV range. The finish is clean, smooth and with minimal residual caramel sweetness.

Autumn is a favorite season for many, for a variety of reasons. Whether it is the ephemeral nature and changing of the season, the fiery landscape, reflective ambience or impeccable weather, the seasonal amber lagerbiers are simply a perfect accompaniment. 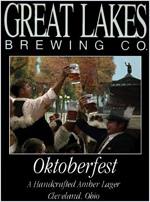 ABV: 6.5
Tasting Notes: Few can match the skill with which Great Lakes Brewing Co. of Cleveland makes German-style lagerbiers in the U.S. Great Lakes Oktoberfest is a robust interpretation of the Bavarian classic. It pours full amber and unleashes a rich malty-sweet aroma backed up by a fresh perfume of spicy/herbal hops. The mouthfeel is full, the flavor deep and opulent dominated by Munich malt, some caramel sweetness and a firm blast of hops. The finish is on the sweetish side and a bit earthy, with the hop bitterness taking a back seat. Big and satisfying. 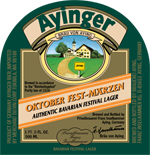 ABV: 5.6
Tasting Notes: Situated in the shadow of the Alps in the Bavarian village of Aying, the Ayinger Privatbrauerei is considered by many to be among the finest in the world, and its fall seasonal perhaps the best of genre. The brilliant golden-copper color is crowned by a rocky ivory head. The nose has fresh bready, toasted malt and classic noble hops, with wisps of vanilla and minerals. It is medium-light in body with a soft and fluffy feel. The flavor is a rounded rush of crisp, clean malt, herbal hops and a hint of honey. Oktober Fest-Marzen is an invigorating harbinger of autumn and seasonal rite that any beer lover should appreciate.

ABV: 5.8
Tasting Notes: The Hacker-Pschorr brewery was founded in Munich in 1417, making it one of the longest-standing operations in the world. Its Oktoberfest-Märzen is one of six brews poured at Oktoberfest. Full reddish-amber in color, it offers up floral noble hop and warming malt aromatics. Some extra sweetish malt flavor is backed up by a firm dose of bittering hops. Complex maltiness, with both lighter grainy notes as well as a good dose of darker varieties. Nicely balanced, with a bit more hop character than some of the others. The finish is somewhat light and dry. 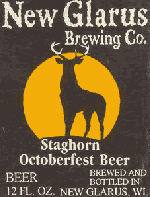 ABV: 6.25
Tasting Notes: The New Glarus Brewing Co. in southern Wisconsin has a well-earned reputation as one of the best breweries in the U.S. Staghorn gives the Bavarian festbiers a run for their money. Glistening orange-amber, with an aroma that is an enticing blend of herbal German hops and fresh bready and spicy malt. It is medium-bodied, and the full range of toasted Midwestern malty goodness shines through in the flavor. The hop bitterness shows up just enough to accent and complement the malt. The finish is soft, clean and crisp, just as a lager should be. This is a sturdy, uncomplicated brew, perfect for the chilly Wisconsin air.