Stepping inside a new beer bar is one of the biggest rewards that can await a beer traveler. There’s something magical about looking down a long row of tap handles, diving into a long beer list and picking out what isn’t available back home. It’s humbling, too, because it reminds you of just how many great beers you’ve yet to taste.

An extensive list is just one thing that helps make a great beer bar. Quantity isn’t everything. Are local breweries represented? Are there unusual beers from other states and across the ocean? Does the list rotate with seasonal favorites and new releases? Is the staff knowledgeable? Has the beer been physically cared for en route to your glass? Is it served just as the brewer intended: fresh, at the proper temperature and in an appropriate glass? And—this is a biggie with us—is the establishment conducive to both drinking and conversation?

Luckily, America is rich in great beer bars where you can expect a perfect pint. So without further ado, let’s visit a few of our favorites.

No visit to Portland, OR, is complete without a stop at the Horse Brass Pub (4534 Southeast Belmont Street). It’s a quintessential British pub where the only New World concessions you’ll see are the BridgePort and Black Butte signs flanking the famous “Public Bar” sign. Well, that and a beer card filled with American craft brews.

Horse Brass opened in 1976, showcasing then hard-to-find imports. Later, it became the first establishment in Portland to offer local micros. There’s a good possibility you’ll see owner Don Younger holding court at the enormous wooden bar. Take a stroll around between pints and look at the posters and pictures, many of which represent military escapades from the days when the sun never sat on the British Empire.

The back-lit boards list the current offerings, which change frequently. So often, in fact, that our server told us that the two-day-old paper menu we picked up had several selections already tapped out. We ordered a Hogsback Stout from Mt. Hood Brewing Co. and a Double Mountain India Red Ale, both served from casks. The food menu is traditional English pub grub: fish and chips, bangers and Scotch eggs; and it’s moderately priced. Quality is Job One, Two and Three at Horse Brass.

The Falling Rock Tap House (1919 Blake Street) in Denver is another corner of heaven for visiting beer lovers. It’s located just a few blocks away from the Great American Beer Festival, and it’s where the brewers hang out after last call at the festival. About a quarter of the over 60 taps are dedicated to Colorado beer, with a wide variety of breweries and styles represented. We’ve been there several times; and even when it’s been packed to the limit, the staff always served us fresh beer at the right temperature.

In addition to a formidable draft list, Falling Rock offers 75 bottled beers: a wide selection of Belgian favorites; high-end selections from American micros, like Hair of the Dog and Dogfish Head; and a smattering of English ales. The décor is ‘70s “starving student”: overstuffed thrift shop chairs with wobbly legs and worn cushions; breweriana on the walls; and hundreds of empty beer bottles on the shelves, including long-defunct brands that will lead you down memory lane. Falling Rock fits like an old pair of jeans, very comfortably.

If your travels take you to Anchorage, be sure to stop at Humpy’s Great Alaskan Alehouse (610 West 6th Avenue). This is the destination for Anchorage’s serious beer fans. The lineup of over 40 drafts changes daily and leans heavily toward brews from the Pacific Northwest. There is also a big bottle selection and if you’re so inclined, single-malt Scotches. During our week-long stay we dropped in, sampled beers from around-the state, made a return trip and another… that alone tells you all you need to know.

Humpy’s isn’t a very big place, but its down-home charm attracts folks of all ages. Chances are it’ll be crowded, but if it is, order a beer at the bar and wait for a table to open up. It won’t be long. This place is fish heaven—a “humpy” is an immature salmon, by the way. Fish are depicted on the walls, and even more show up on the menu: halibut burgers and tacos, and even a smoked salmon Caesar salad. There’s live entertainment nightly and, unlike many places, it won’t interfere with your conversation.

Five thousand miles away, in the “other Portland”—Maine, of course—you’ll find The Great Lost Bear (540 Forest Avenue). Yes, as you might expect, it sports a large stuffed bear. Fifteen of the 65 taps are dedicated to Maine micros; and the beer selection changes so often that the Bear’s Web site warns: “We at the Great Lost Bear can not update our menu daily online (we’re too busy changing beer kegs).” 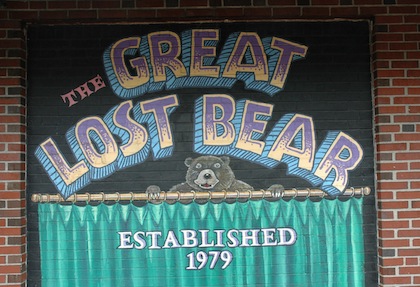 Oh, about that Web site. It also features the “Bear cam,” so you can use up your 15 minutes of fame while Web surfers watch you quaff. But first, take a few moments and wander around. The walls contain a complete flea market: stuffed animal heads, classic movie posters, pictures of long forgotten politicians and amusement park memorabilia. It’s a good place to eat, too. The menu is, as you might have guessed, eclectic. If you can’t find a satisfying accompaniment to your pint here, you won’t anywhere. And before settling your tab, ask your server if they have any “Support Your Right to Arm Bears” bumper stickers in stock. Regardless of your views about hunting, they make for interesting conversation.

The Ginger Man Pub opened in Houston in 1985. There are now four pubs in this “close-knit family.” They’re all a little different, and each has its own impeccable beer line-up. We haven’t been to all of them—yet—but let’s set a course for Houston (5607 Morningside Drive). First, though, bring your GPS, because this place is hard to find without some help. From the outside, it looks like a house with picnic tables on the front deck; inside a long wooden bar is the main attraction. The backyard is a small beer garden. The taps, which run the length of the bar, are equally divided between domestics and imports.

The Ginger Man is named after one of literature’s gamier characters. An autographed copy of J.P. Donleavy’s famous book is available for customers to thumb through, as are copies of Michael Jackson’s books. The location is close to Rice University and the Texas Medical Center. As you might expect, there have been more than a few serious conversations here over the years, all of them over some mighty fine beverages. Serving fresh beer from 75 taps for over 25 years is a sure sign of an educated clientele. And any place that sells souvenir t-shirts with the famous Shakespeare quote, “And I will make it a felony to drink small beer,” has got to warm your heart.

Our next stop is the Toronado (547 Haight Street) in San Francisco. But, there’s a snag: the word count police just shone the spot light on us. So this is where we’ll meet you in the next issue when we visit the City by the Bay. Until then—cheers!

Paul Ruschmann
Paul Ruschmann is a writer, editor and researcher. Maryanne Nasiatka is a writer and photographer. They travel as much as their budget permits visiting many of the places where great beer is brewed and enjoyed.