How To Extend Your Brew Day 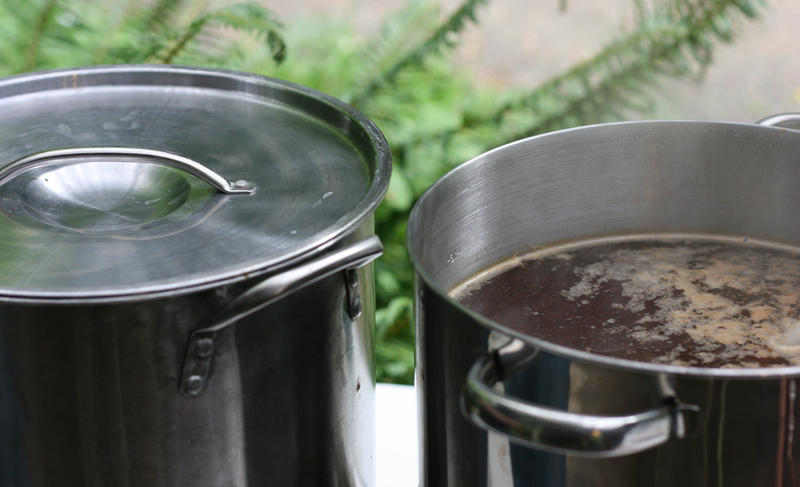 Learn how to get two completely different brews from a 10-gallon batch of homebrew. Photo by Colby Perry.

Outfitting a homebrewery capable of making 10-gallon batches allows for an efficient use of precious brewing time. It comes with a caveat though: 10 or more gallons is a lot of one particular brew to have on hand. One solution is to turn it into two different brews. There are many ways to approach this, using a relatively simple post-boil approach in separate fermenters. These methods require no additional equipment and are far easier than parti-gyle, or multi-batch brewing, and can give similar results. Even better, two or more of these ideas can be combined to make very divergent brews.

Once the wort is cooled and split into two fermenters, alterations can be made during primary or secondary fermentation, or in the maturation vessel or serving keg, depending on the desired effect and nature of the additive. Nearly any standard or unconventional ingredient can be used if you carefully consider which route will best express your intentions and devise a recipe that will accommodate both brews. It will also encourage experimentation with ingredients and recipes using only half of the batch.

Late doses of hops are commonly added to fermenters and kegs; why not do something different for each split? This is also a clever way to isolate hop cultivar aromatics and other characteristics for tailoring future recipes. Hops can be added directly to the primary fermenter, the churning wort ensuring thorough extraction of aromatic compounds (though there would be some scrubbing of those aromatics by CO2 release). Create a strategy that complements the late-kettle doses.

Hops can also be added during the secondary stage. Aromatic retention will be better at the expense of extraction. Pellets are best for carboy secondary fermentation and conditioning, as they can be allowed to settle for a few days and left behind during racking. Whole-cone hops or plugs work wondrously in corny kegs for conditioning or serving (true dry-hopping). Simply tie the hops in a small muslin bag and add to the keg.

For any application, try ½ to 1 ounce as a starting point.

Spices and herbs can be used similarly to hops, though the essential oils and aromatics, generally added at the end of the boil, are best extracted in the presence of heat. To duplicate this effect, make a tea of your preferred spices and/or herbs by boiling them gently in a quart of water for about five minutes. Once chilled, this can be poured (or strained) into the brew at any stage of fermentation.

“Dry-spicing” can also be used to great effect with herbs and botanicals to give a fresher character and can be added during late primary or secondary fermentation. Note that freshly ground whole spices are infinitely superior to pre-ground, packaged ones.

One other option is to soak them in vodka for a couple of weeks and dose your batch with that “liqueur.” Once introduced to the beer in the secondary or keg, allow the flavors to marry for a few days. Commercial fruit, spice and nut extracts, as well as liqueurs, are also common and easy vehicles with which to flavor a portion of your batch.

Spiced Belgian or holiday brews can be made this way. Porter and stout pair well with vanilla, cocoa, licorice or star anise. Cold-pressed coffee fairly begs to be added to a robust stout recipe. Chocolate syrup can be added directly to the primary or secondary fermenter to flavor dark brews.

Perhaps the easiest split is to pitch different yeast in each fermenter. The key is cobbling a recipe that will work with both. Most standard recipes will stand up to the variations among the strains and result in brews with subtle or great differences. American vs. British yeast is one such experiment that will yield two very distinct brews, especially when coupled with post-boil hop additions and carefully planned kettle hop schedules. Porter, stout, brown ale, barley wine/old ale and Scottish ale favor this strategy nicely.

The variation among German, British and Belgian yeasts can also be quite different, most notably among the Belgians. A dark lager fermented with either Czech or Bavarian yeast or Belgian dubbel with two different abbey yeasts would be a fun way to get some variety out of your brew session.

This strategy is an easy shortcut to mimic parti-gyle brewing, an old method where the first runnings of the mash are used to make a strong brew, and the second runnings, made from a remashing of the grain bed, are used to make another, weaker brew. The idea is to make a batch that will yield two beers of different strengths. There are dozens of styles that overlap with respect to recipes, the only difference being original gravity.

Brew 10 gallons of strong wort and then dilute one of the fermenters with water. Strong wort with an OG of 1.070 to 1.080 can be diluted in one fermenter to OG 1.040 and 1.050 without compromising anything. One beer can be made for immediate consumption, possibly dry-hopped, and one for further maturation. One can be kegged, the other bottled. Some suggestions to try are Maibock/Vienna, imperial stout/American stout, barley wine/bitter, Belgian tripel/blonde and IPA/pale ale to name a few. Try an imperial and plain version of a beer, or a strong/weak split that also includes different yeasts, post-boil hops or other flavorings.

Another way to alter one fermenter of wort, while boosting gravity at the same time, is through augmentation with extra fermentables. Sugars (syrups, honey, molasses, granulated or bulk sugars) can serve to lighten body, boost original gravity and contribute flavor without throwing off the balance of your brew. They can be dissolved in water, boiled briefly, cooled and added to the primary or secondary fermenter. Bear in mind that any change in OG will also affect the bitter/sweet balance of the wort. One pound per 5 gallons is a good starting point for experimentation.

A pound or two of honey will make a big difference between two fermenters, and the varietals can be selected to match the beer style or profile. Braggot is also an option, but will require a bit more moxie. Braggot is roughly an even mix of ale and mead, barley malt and honey each contributing about half of the fermentables.

To make braggot, brew a regular beer at OG 1.050 and add 5 pounds of honey to one fermenter. The honey can be dissolved in two quarts of water, pasteurized and cooled before introduction. This method will raise the gravity to 1.085 or higher and contribute about a gallon of liquid. Try clover or orange blossom honey for a witbier braggot or a darker varietal in brown ale.

Malt extract can be also be added after boiling and cooling to enhance maltiness (amber or Munich extract) or to simply boost gravity (pale or light extract) without compromising the all-malt nature of the brew. Black LME, made entirely from black malt, is available from Briess and could be used to make stout, porter or schwarzbier from a pale brew.

Fruit, fruit juice or purée, added near the end of primary fermentation, is also an excellent way to stretch your brew day. Canned products, such as blueberry, cherry, raspberry, elderberry, blackberry, apricot and peach, are available at your local homebrew store. They can be poured into the fermenter. Try seasonal fruit from the market, which is generally inexpensive.

For those of you who keg exclusively, it might be worth your time to revisit bottling. Bottling doesn’t need to be the thankless chore that it is perceived to be. Get in the habit of rinsing and drying the bottles immediately after emptying and they will only need a quick soak in no-rinse sanitizer when you are ready to bottle. Consider using one of the techniques above to make 5 gallons specifically for the keg and 5 gallons tailored for bottle-conditioning and archiving. The rewards far outweigh the effort, in my opinion.

Finally, there is one more way to get two completely different brews from a 10-gallon batch: Brew with a friend. When finished, split the wort in half. Once in your own hands, you can choose you own yeast or any of the other post-boil modifications mentioned above. Or, organize club “Brew-Ins” with several groups brewing and divvy up the spoils of the boil.

See recipes on the next page.