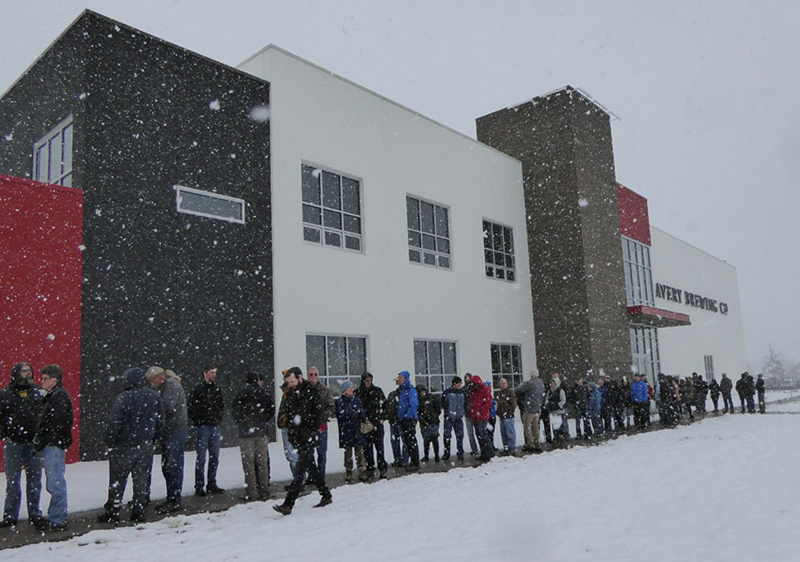 Snow showers didn’t dampen the spirits of people who lined up for the opening of Avery Brewing Co.’s new Boulder brewery . Photo by Dan Rabin

One of Colorado’s most respected breweries has a new home. On Monday, Feb. 16, Avery Brewing Co. celebrated the long-anticipated opening of its new Boulder, CO, headquarters. Most would agree that the move to the impressive 67,000-square-foot, $27 million facility was long overdue for the largest of Boulder’s 19 brewing operations.

Avery was founded in 1993 by company president Adam Avery and his father, Larry. The original location was sandwiched in an east Boulder industrial park amid a mishmash of auto repair shops and other small businesses. As the company grew, Avery expanded into several nearby business units. Chunks of the undersized parking area were sacrificed to accommodate towering fermentation tanks and a makeshift patio. While employees dealt with a logistically challenging collection of discontinuous work spaces, visitors to the popular brewery faced a difficult parking situation and lack of quality outdoor drinking space. 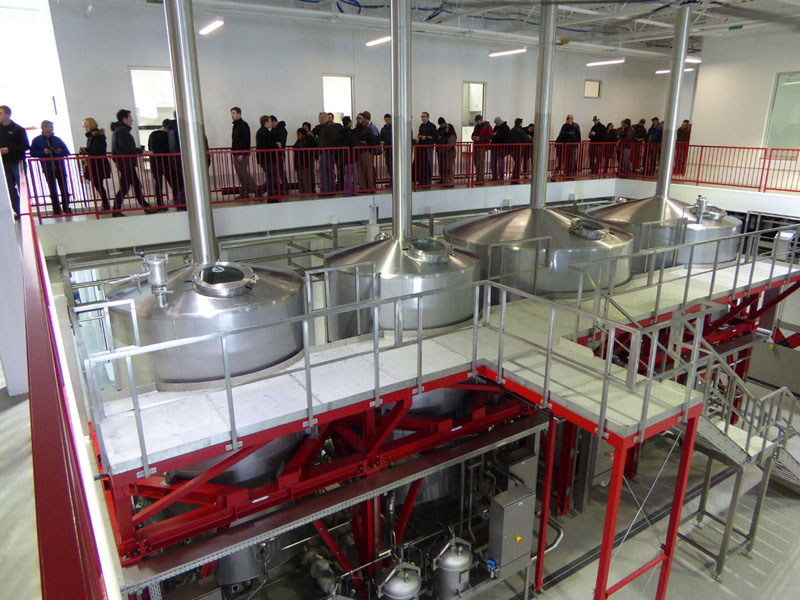 With the new facility—which opened on-schedule, barely a year after the February 2014 groundbreaking—Avery will realize not only a substantial increase in brewing capacity, but also numerous operating efficiencies and a greatly enhanced experience for brewery visitors. In 2014, the brewery produced close to 50,000 barrels. When brewing operations transition to the new custom-built, German-engineered, 85-barrel brewhouse over the next month or so, Avery will have the capacity to brew 85,000 barrels annually, although the brewery estimates 2015 production will be 68,000 barrels. With the planned installation of four additional 720-barrel fermentation tanks, brewing capacity should increase to 150,000 barrels in the foreseeable future.

Avery’s production of barrel-aged and sour beers is also undergoing a sizable expansion. While the new brewery has dedicated space for 350 oak barrels in a specially designed negative-pressure environment, off-site barrel storage will allow Avery’s barrel collection to triple to 3,000 by year’s end.

The new two-story brewery was designed to make all aspects of the brewing process visible to visitors. A catwalk on the second level provides overhead views of the expansive brewing operations. A series of informational placards will be installed for self-guided tours. 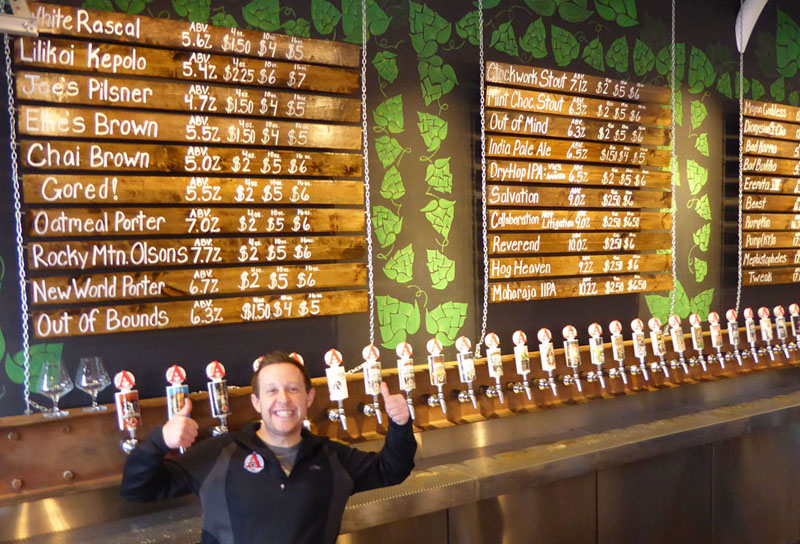 The ground floor taproom has a contemporary industrial look and feel with a surprisingly modest capacity of 75 guests. The white, red and black walls mimic the building’s attractive exterior. High-top tables are constructed of repurposed century-old railroad dining car flooring and add a rustic touch. Beer is dispensed from a row of 30 taps. Windows along the exterior wall open to a dog-friendly patio. 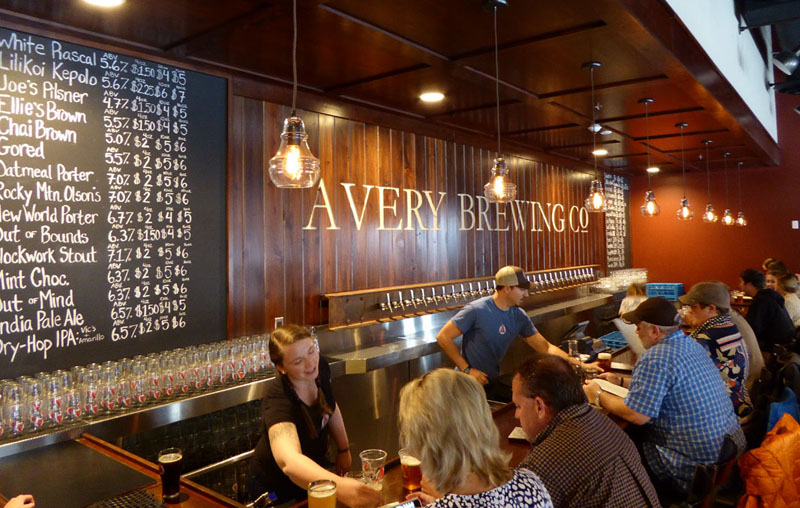 A restaurant is located on the second level. Dark wood decor adds a publike feel to the space. Like the first-floor taproom, the restaurant can accommodate 75 guests and dispense 30 beers. The menu features a gastropub-meets-Southern-smokehouse assortment of meat and cheese plates, Southern favorites, sandwiches and smoked meats. Vegetarian and numerous gluten-free options are available. The full restaurant menu is also available downstairs in the taproom. 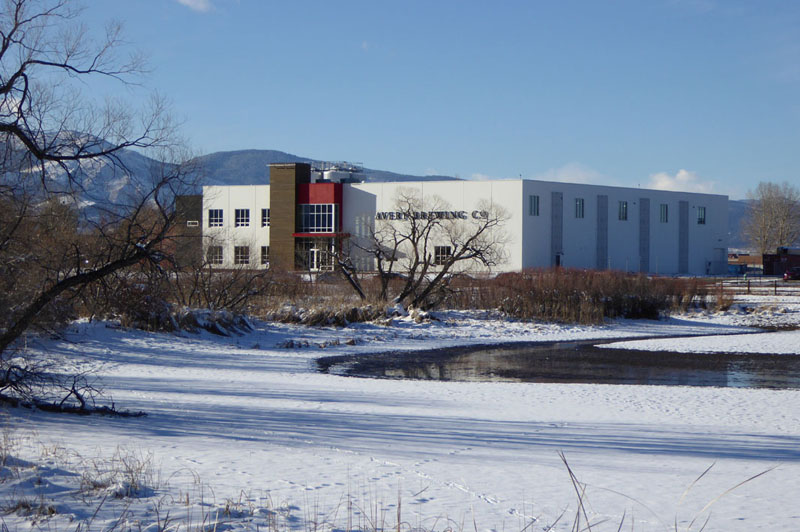 The brewery sits on a 5.6-acre site in a quiet business park in the Gunbarrel neighborhood of northeast Boulder, a mixed-use area of light industry and expanding residential development. In sharp contrast to the cramped confines of Avery’s former alleyway digs (which an as-yet-unnamed brewery is negotiating to take over), the new brewery site is expansive and isolated from neighboring business. The structure is located steps from a circuit of walking paths encircling a pair of small lakes popular with joggers and dog walkers from nearby residential neighborhoods. The 12-mile-long LoBo Trail is close by, connecting Boulder with the town of Longmont. 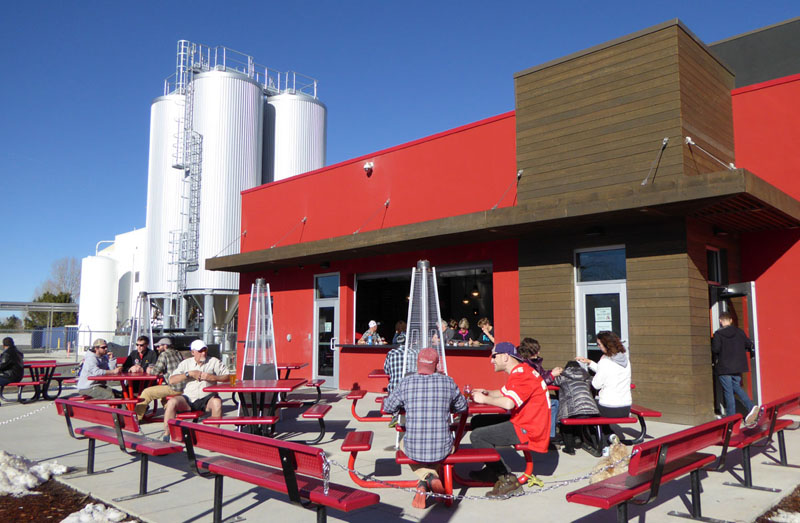 Visitors christen the patio during the opening week of Avery’s new brewery. Photo by Dan Rabin

In its first week of abbreviated operating hours, both the taproom and restaurant have drawn large and enthusiastic crowds, with lines often snaking around the perimeter of building. In March, Avery will begin an 11 a.m.-11 p.m. daily schedule. With the completion of the new facility, the brewery has been on a hiring binge, increasing its workforce over 25 percent in February. Avery currently has 132 employees and plans to continue filling additional positions.

Avery is not the only prominent Colorado brewery to undertake a recent large construction project. Denver-based Breckenridge Brewing is building a new 85,000-square-foot, $35 million brewery on a 12-acre riverside location in Littleton, south of Denver. The company is targeting a spring 2015 opening. Meanwhile, Denver’s Great Divide Brewing broke ground last September on a $38 million facility on a 5-acre parcel in the city’s River North neighborhood. Phase one of the two-phase project will include packaging and warehouse space and a taproom, and is slated for a summer 2015 opening.