All About Beer Magazine November 2012 Issue 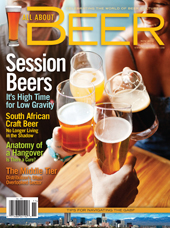 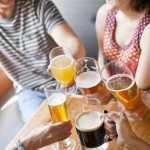 In 2006, bigness was in style. It was the height of the extreme beer revolution, and though pale ales, IPAs and other classics remained the backbone of the craft brewing industry, America was burning in the high heat of extreme beer fever. Dogfish Head was just assuming national celebrity status, “imperial” renditions of almost all... View Article 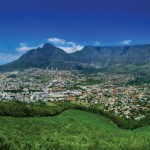 Beer has deep roots in South Africa. That’s no surprise, since it was colonized in the 17th century by the Dutch and later by the English. In addition, some tribes such as the Zulu and Xhosa have a history of sorghum and maize-based brewing. The brewing industry there is younger, however, dating to the 1895... View Article 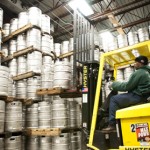 If you were to ask fellow beer drinkers to describe their favorite brewery, where would they start? They’d probably mention things like stainless-steel tanks, certain flagship and seasonal offerings, pot-bellied growlers, the smell of steeped barley, intermittent beardedness, the tall rubber boots… What about their favorite retailer? Perhaps they’d start with the beer aisle or... View Article

Last Round A natural supplement that comes in a 2.4 oz bottle, Last Round is a blend of kudzu root, stevia leaf, green tea leaf, ginko leaf and Ural licorice root. It tastes something like a Ricola cough drop and they recommend one bottle before bed and one bottle when you wake up. Worked for... View Article 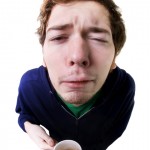 Anatomy of a Hangover

“Never again is what you swore the time before.” These song lyrics from Depeche Mode summarize our feelings about the curse of imbibing: the hangover. The symptoms are unmistakable: headache, body aches, nausea, fatigue and perhaps tremors. It is of little comfort to know that despite its widespread prevalence, medical science has not developed a cure... View Article

From Wine to Beer

Full Pints - In The Barrel

Navigating Your Way Around the Great American Beer Festival

For beer lovers, attending the Great American Beer Festival (GABF) in Denver deserves to be at the tippy top of your bucket list, that check-list of things to do or places to see before you die. In 2012, there were more than 450 breweries pouring nearly 2,500 different beers (from all 84 recognized categories) all... View Article

Drinking Dutch Courage is Back in Style

Gin has a history that is more twisted than the fancy spiral lemon peels used to adorn many a happy hour martini.

In recent years, there has been a particular fondness for brews with “extreme” qualities. Intense hoppiness, rugged roasted flavors, wild funkiness and alcoholic potency all fit this bill. Sour flavors have most recently become a desired affection. Berliner weisse features a reserved lactic sourness as its keynote, the supplementary fermentation resulting in an effervescent, bone-dry... View Article

Fall always offers a chance to kickstart that homebrewing motor. We can take advantage of the cooler fermentation temperatures and move from heat-slaying brews to something more rich and substantial to pair with invigorating weather and culinary traditions of autumn. Of course, Thanksgiving is the culmination, a grand finale to the harvest and an ushering... View Article 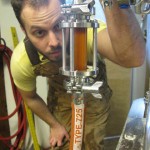 Pull Up A Stool with Ben Edmunds

All About Beer: With no professional experience and brewing for a brand new brewery in a city renowned for its beer culture, were you intimidated when you first started? Yeah, absolutely. For months I had a huge amount of anxiety. I was confident that I could make good beer, but I wanted to enter the... View Article

NoDa Brewing Co. Charlotte, NC This brew utilizes a wide assortment of Belgian malts, with Tettnang and Mittelfruh to balance its sweetness. Fortified with Belgian candi sugar, much of the flavor and aroma is derived from the Trappist yeast. The yeast provides an array of flavors and aromas such as banana, clove, vanilla, pear, pineapple... View Article

Perennial Artisan Ales St. Louis, MO In Belgium, Hommel is the word for Humulus, the plant genus where hops reside. This beer defies tradition by combining North American malts, Pacific Northwest hops and a Belgian yeast strain. The result combines earthy and spicy tones from the yeast with a slight orange note contributed by the... View Article

Meantime Brewing Co. London, UK Imported by Artisanal Imports Inc., Austin, TX Kent Fuggles and Goldings mark this beer as ﬁercely British. Its noble hop character can be herbal or grassy, with hints of ripe cheese in the nose. This is a sign that you are enjoying a traditional English beer. ABV: 7.5 ABW: 6.0... View Article

Oakshire Brewing Co. Eugene, OR Originally homebrewed by Oakshire’s founder, our amber is an outstanding and versatile ale that is traditionally crafted with the highest quality ingredients. It pairs well with a variety of foods or simply as an afternoon pint. ABV: 5.4 ABW: 4.32 COLOR: N/A BITTERNESS: 24 ORIGINAL GRAVITY: 12.8 P AVAILABLE: OR,... View Article 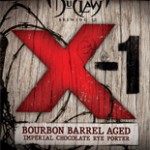 Strike Brewing Co. Los Altos, CA This beer recently took first place in the California State Fair in the American Brown Ale category. Versatile in that it is clean and easy drinking by itself but also has good flavor to match well with food. ABV: 4.8 ABW: 3.8 COLOR: N/A BITTERNESS: 23 ORIGINAL GRAVITY: 1041... View Article

Eel River Brewing Co. Fortuna, CA Traditionally, old ales are an English style of dark, rich and sweet ale, typically with flavors of soft currant fruit and blackstrap molasses. While old ales typically have IBUs (bitterness) of 30-65, Eel River Brewing put their own spin on the style by adding extra hops to ramp up... View Article

Telluride Brewing Co. Telluride, CO An American-style pale ale brewed with a generous amount of German rye malt and an abundance of American hops, our ale embodies an earthy flavor and finishes with a hint of spice and big citrus notes. This powerhouse of an ale excites even the most dormant of taste buds. ABV:... View Article