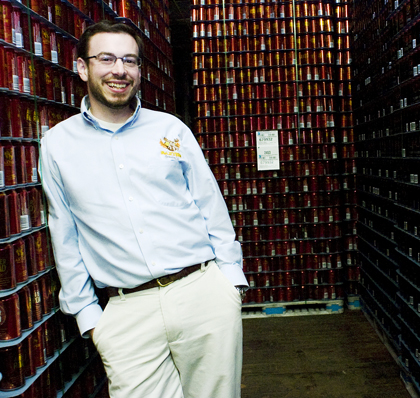 Luke Livingston: Baxter Brewing Co., located in the historic Civil War-era Bates Mill in downtown Lewiston, Maine, is the first brewery in New England to package 100 percent of its beer in metal containers only (kegs and 12oz cans). Baxter opened in January 2011 and ended up brewing more than 5,000 barrels of beer in its first year of business—an industry first. This accomplishment resulted in Baxter being named the 2011 New Brewery of the Year by BevNet Magazine and (I was) named one of Forbes Magazine’s 30 Under 30 most influential entrepreneurs under 30 years old.

I was gifted a homebrew kit for my 21st birthday during my junior year of college at Clark University in Worcester, Massachusetts from my older brother. I started brewing while at school and continued until the (resident adviser) took away my brewing equipment and threatened academic probation. I ended up proving to the school that there was no existing rule at the university which said I couldn’t do what I was doing. But there is now; no coincidence. I got off unscathed. From then on, I was hooked.

My first batch of beer was a nut brown ale and it was, at the time, my favorite beer I had ever had.

Today my favorite style of beer is tough to pin down. I go through cycles and usually drink pretty seasonally, but I think that very dark beers, porters and stouts always top my list.

Although they don’t know it, Ken Grossman of Sierra Nevada Brewing Co. and Sam Calagione of Dogfish Head definitely are mentors because they’ve both done amazing, groundbreaking things for the industry and were both in their mid 20s when they opened their breweries. So their stories are direct inspirations.

Good packaging; great product; a fresh approach to marketing and branding unlike what everyone else in Maine was doing at the time; the support of the Lewiston-Auburn community; and surrounding myself with a staff and support team who are much more talented and have been in business much longer than I have, all of whom I can lean on for help and support.

Obviously taste, flavor and quality are huge driving factors. But beyond that, I think Americans are returning to a time when they favored local, handmade, high-quality things and companies they can identify with and truly get to know. Companies who don’t just hide behind multimillion dollar ad campaigns. There’s a face given to craft breweries and people really like that.

I think the next generation will accomplish two things: First, they will continue to push the envelope; not necessarily with zany or outlandish beer styles (although that too), but with innovation, collaboration, better quality standards and fun. Second, they will find new and powerful ways to spread the craft beer gospel, turning more people onto our world. It’s going to be a fun ride!

I try to practice everything I just preached above, but I think they’re all especially important here in Maine, where many of the craft beer trends now popular across the rest of the country—(like) big, hoppy IPAs, canned craft beer, a youthful, edgy brand identity, et cetra—are just starting to trickle into the state. Like with most national trends, Mainers are a little late to the party. A state dominated for years by a select few English-style breweries, Maine is ripe for a shake up!

I find myself saying black IPA when referring to the style because Cascadian dark ale is too much of a mouthful and is way too confusing to most people. But I realize that black India Pale Ale is contradictory, so who knows. If the beer is tasty, it’s not worth arguing over—drink up!