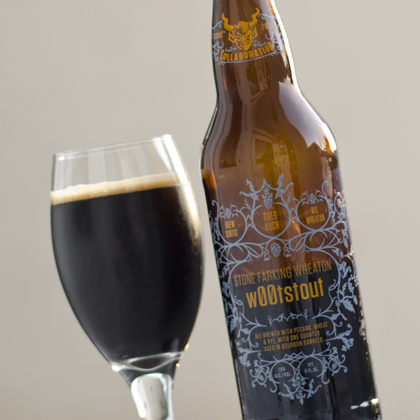 The story of how these three men, and dare we say, “geeks,” met requires a complex explanation and jaunt back in time. In 2004, Wheaton called to ask if it would be okay for him to put the Arrogant Bastard Ale logo on his blog’s website, and Koch just so happened to answer the phone. Since Wheaton was so enthusiastic about the beer, Koch granted him approval, all the while thinking that this guy’s name sounded familiar. A year later, as crazy random happenstance would have it, Wheaton signed up for the Stone email newsletter and just so happened to be the 10,000th email newsletter subscriber. Astonished that THE Wil Wheaton was the lucky subscriber, Koch reached out to him to say thank you, and laid the foundation for what blossomed into a friendship based on a mutual appreciation of delicious craft beer. As Wil’s enthusiasm about beer grew throughout the years, he took up the noble art of homebrewing, blogging about his accomplishments along the way. Eventually, in spring 2012, Koch and Wheaton discussed the idea of brewing together, and in early 2013 the clouds parted, the sun beamed down, unicorns were seen dancing on rainbows, and finally, they found time in their busy schedules to meet for a session in the Stone brewhouse.

Next on the agenda was deciding who to include in their collaborative effort. Wheaton suggested Curtis, as they have been friends for more than 10 years. Additionally, Koch had met the Fark.com innovator a number of times at the annual TED conference in Long Beach, Calif. ln April, the trio convened at Stone’s brewing facility to craft what is now known as Drew Curtis/Wil Wheaton/Greg Koch Stone Farking Wheaton w00tstout.

“Wil does such a great job of communicating to other people the joy of homebrewing,” said Koch. “I like the way he unabashedly shares his love for it. Since we make collaboration beers in threes, we got to talking about a co-conspirator and Wil suggested Curtis. It was a lot of fun brewing with these guys and I have to say, I’m really farking impressed with the result!”

“Brewing at Stone was the culmination of many years of learning to love amazing craft beer, and then learning how to make it myself,” said Wheaton. “Having the opportunity to work with people I really like and respect and do it on a grand scale was great.”

“Don’t ask me why, but I had no idea when I agreed to this that I’d actually end up participating in making the beer,” said Curtis.  “I thought Greg and crew would have preferred to do it themselves, but apparently watching me and Wil fumble around with 50 pound bags of malted wheat and crushed pecans was plenty hilarious. I definitely had a blast doing it!”

In addition to beer’s traditional ingredients – water, hops, malted barley and yeast – Drew Curtis/Wil Wheaton/Greg Koch Stone Farking Wheaton w00tstout was brewed with wheat, rye and pecans, based on the collaborator’s unique backgrounds and preferences: Curtis’ rye and pecans (he’s a Kentucky Southerner), Wheaton’s wheat (I mean, comeon…his name is WHEATon), and Koch’s hops (he’s a confessed hop addict). After fermenting, a portion of the imperial stout was stored in bourbon whiskey barrels for two and a half months, and then blended with the rest of the beer to add complexity. The result is a beer bursting with a pleathora of smells and flavors including cocoa, coffee, licorice, oak, nuts, vanilla and, of course, bourbon. In what may be the highest alcohol beer ever brewed at Stone, it clocks in at 13 percent alcohol-by-volume (ABV) and 65 International Bitterness Units (IBUs). The beer is ready to enjoy now, or may be properly cellared for several months or years. Over time, it will develop deeper, rounder coffee, nut and bourbon flavors as the hop aroma and bitterness subside.

Stone decided to release three bottles with various artwork labels. Why? Why not! The first design is the “classic” Stone 2013 Collaboration bottle design featuring an intricate hop vine crest with hop cones. The second “hero” bottle features illustrations of Koch, Wheaton and Curtis as superheroes complete with capes, masks and a gargoyle emblem on the chest of Koch’s outfit. The final “comic” bottle includes artwork by popular internet comic artist Joel Watson of HijiNKS Ensue, in which each collaborator offers one of the key ingredients for the beer – Curtis’ pecans, Wheaton’s wheat and Koch’s hops. The hero and comic bottles are limited release (hint: collector’s items).

As if they needed another excuse to hang out, the collaborators will debut the beer en masse on Wednesday, July 17 at the newly opened Stone Brewing World Bistro & Gardens – Liberty Station in San Diego during an event dubbed Hop-Con: The w00tstout Launch Festival. The festivities will commence at 5pm and include:

A cask of Drew Curtis/Wil Wheaton/Greg Koch Stone Farking Wheaton w00tstout will be available in addition to other special release beers, including beers brewed at Stone Brewing World Bistro & Gardens – Liberty Station. The event is sold out.

Taste: Some cocoa, coffee and fruitiness up front. Mid-palate, the bourbon barrel-aged portion of the beer is apparent, so oak, vanilla, nut and bourbon flavors transition to a slight alcohol heat and hoppy bitter finish. As the beer warms, a nuttiness almost reminiscent of almonds starts coming through (but we used pecans!).

Palate: Thick and hearty. At 13% ABV, this beer is definitely a sipper. It is smooth and creamy, with a slightly warming and drying finish.

Overall: This beer is a monster, and it may be the highest ABV we’ve ever brewed. The flavors are a wonderful blend of everything that makes a great imperial stout, loaded with roasty notes and malty complexity. Brewing with rye and nuts always creates challenges for our brewing team, but they rose to the occasion with this one – it’s simply amazing.