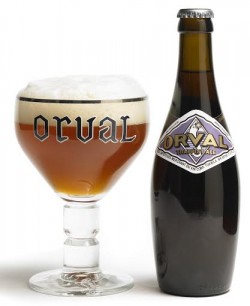 Princess Matilda, a Duchess of Burgundy, was passing through the forest in what is now Belgium with a group of travelers. They stopped to rest near a clear spring, and as Matilda trailed her hand in the water her wedding ring – a memento of her deceased husband – slipped off her finger and quickly sank. Matilda’s heart sank along with the ring, but she fell to her knees and prayed for its return.

Imagine her delight when a trout swam up to the surface with her gold ring in its mouth, returning it to her! She proclaimed this area to be a “Golden Valley,” and gave the land to the church to establish a monastery. To this day, the trout and ring can be seen in Orval’s logo.

The first church was consecrated at Notre-Dame d’Orval in 1124, and the monastery became part of the Cistercian (Trappist) order in 1132. Orval was rebuilt after fire in 1252, and rebuilt again after a complete sacking and pillaging in 1637, during the Thirty Years War. But when Napoleon’s General Loison sacked and burned Orval in June 1793 everything was wiped out. The community was disbanded in 1795.

But in 1926, the rebirth of Orval began – and a brewery was included in the construction plans, as a traditional way of earning revenue for construction and daily operations.

Over the decades since, Orval Trappist Ale has earned global recognition: there is no other beer like it.  It’s made from pale and caramel malts, with liquid candi sugar; it’s fermented by the Orval yeast strain, dry-hopped, then bottle-conditioned with Brettanomyces, a yeast that consumes complex sugars. This leads to Orval’s ageworthiness; its dry finish; a bold, acidic sharpness; and a sourness that is somehow soft and appealing.

On March 26th, 2016, devotees of Orval Trappist Ale – and even some folks who haven’t tried it yet – will convene at bars across the US to celebrate the first annual Orval Day. Check our events page to find an Orval Day venue near you – join us!

(While profits from Orval and other Trappist breweries go to charity at the brewery level, a portion of the proceeds from every bottle of Orval sold on Orval Day will be donated to MAP International.)