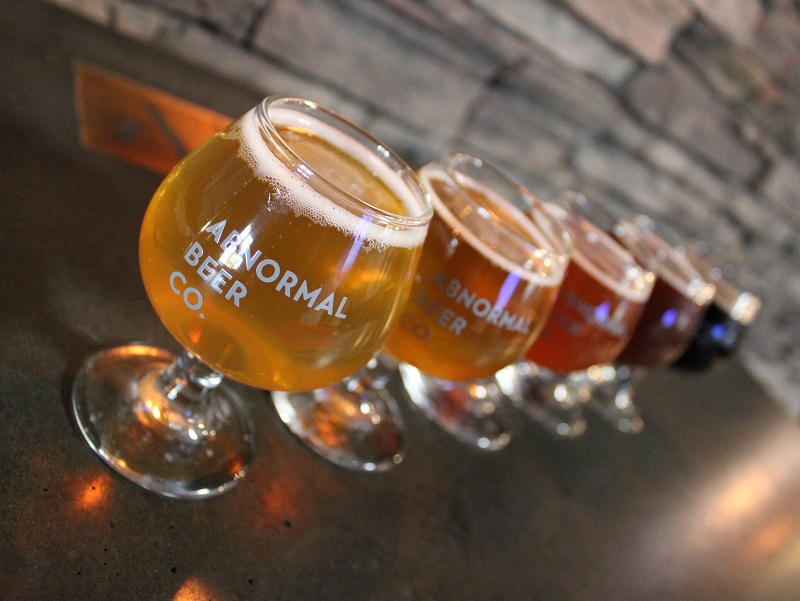 San Diego–Tucked in the corner of an industrial park in San Diego’s northernmost expanses is an inauspicious restaurant, The Cork and Craft, home to the Abnormal Brewing Co. (16990 Via Tazon). There isn’t another dining establishment for blocks, and it doesn’t look like much from the outside. Inside, it is spacious, brilliantly appointed and enhanced by an open kitchen, live music stage and some of the city’s finest modern gourmet. The brewery is manned by Derek Gallanosa, an nth-degree beer nut and San Diego brewing industry socialite who learned fermentation at Karl Strauss Brewing Co. before joining Abnormal. Here, he’s not only developed his own line of mostly hoppy, mostly session beers, but also employed lessons and labor from many industry friends made during his countless (rather epic) bottle shares, proving good things stem from good beer. A flight of five 4-ounce samples costs $15. –Brandon Hernández

The bouquet is simultaneously enchanting and nostalgic, grandpa’s thermos in a fully stocked doughnut shop at dawn. Cacao nibs plus premium java from Abnormal’s sister business, Mostra Coffee, lends rich flavors of Joe registering as espresso, cocoa and chicory. Though creamy, it remains medium-bodied with lactic acidity, milk chocolate and cinnamon bark earthiness in the finish.

Light of body but big on flavor, this beer is a reliable food companion. Cascade, Mosaic and Nugget hops impart mostly tropical flavors—pineapple, papaya, guava—leading to a poignant and resinous, piney endnote.

A collaboration with Alpine Beer Co., this dry, super-fruity number is 100 percent W est Coast, drawing equally off Citra and Galaxy. A nose rife with grapefruit and melon gives way to pineapple, lemon and peach on the palate, followed by a tacky, citrusy aftermath reminiscent of lemon rind and pink grapefruit.

As the name implies, this beer leans on El Dorado hops (Mosaic’s in there, too). They lend plenty of lemon-candy flavor, but with aromas of banana and moss, bubble gum in the mid-palate and a finish that evokes flavor memories of lemongrass, thyme, white pepper and nasturtiums.

Abnormal’s first IPA is its flagship beer. With a substantial yet crisp body offering a bit of biscuitiness to offset big lemon overtones, its ascension to that role seems justified.