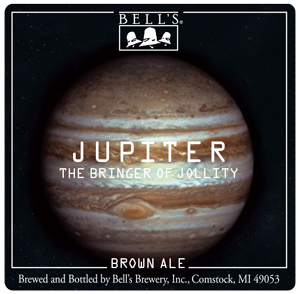 Jupiter is the fourth of seven releases in The Planet Series of beers from Bell’s. Each beer is inspired by English composer Gustav Holst’s seven-movement orchestral suite “The Planets.” The series of beers began in August 2014 and ends in July.

Jupiter pours dark brown with a creamy, off-white head. The label on the bottle promises jollity, and I’m smiling after my first sniff thanks to a subtle hint of cinnamon candy—Hot Tamales, perhaps. But malt is the real star in this beer. Toasted bread and molasses dominate the nose. Notes of caramel and bittersweet dark chocolate harmonize with each sip. While Jupiter may not be my favorite beer on this planet, it’s a worthy choice for dessert and an evening of star gazing.

Jon Page
Jon Page is the Managing Editor of All About Beer Magazine.