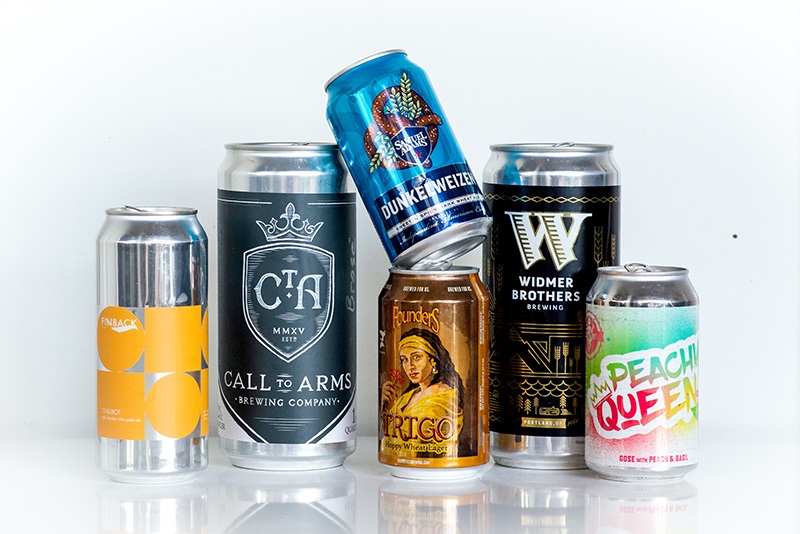 Trigo is the sixth release Founders Brewing Co. has brewed for ArtPrize, an art competition held every other year in Grand Rapids, Michigan (other past releases for this event include beers like Green Zebra and Mosaic Promise). The nose boasts big aromatics of orange and pineapple that carry through on the palate; it’s clearly been brewed with an abundance of late-addition hops like most IPAs these days, but there’s a balance to the beer. The fruit notes linger on into the finish, along with a slight dankness and firm bitterness.

An exclusive to the brewery’s Fall Can Variety Pack, Samuel Adams Dunkelweizen offers a complex nose of toasted malt and clove, with a bit of bubblegum. There’s a bit of grape on the palate, but this one’s all about the marriage of those toasted dark malt flavors with German weizen yeast. It’s a little toasty, a little tart and a little tangy, with a creamy mouthfeel. And it’s as evocative of fall as any other beer in the variety pack, including the brewery’s popular Octoberfest.

The rosé trend continues with Call to Arms Brewing Co.’s Brosé, which is brewed with organic raspberries from Oregon, Sorachi Ace hops, and fermented with a Champagne yeast. Not surprisingly the raspberries are discernable on the nose, and while they are present on the palate they never come across as overly sweet. It’s doing a disservice to a far more complex beer, but thinking of raspberry-flavored La Croix will put you in the right mind. The hops and malt bill are restrained, so that the raspberries might shine through. The fruit is fleeting though, and a dry finish invites another sip. It’s light, effervescent, and one of the most easy drinking rosé beers I’ve had to date.

Brewed in collaboration with Girls Pint Out, Peachy Queen gose is brewed with peaches, basil and cardamom. The tartness and sharp acidity that have become the calling card of kettle sours are apparent on the nose, while the peach is more subtle. It does come through on the palate, where the fruit’s natural sweetness helps balance out the beer’s tartness. The basil is really well integrated; it’s just barely there, but it works well with the sweet peach. Given that the herb works well in lemonade, it’s not surprising that basil works just as well in this tart and citrusy beverage.

Fresh orange zest and pineapple waft from the glass. The first sip reveals more pineapple, mango and just a hint of dankness. Chillbot has a luscious mouthfeel and a substantial bitterness, and it strikes that big, juicy character that so many brewers are striving for these days.

Poured from a Crowler, the nose on Juicy Sunrise is sweet and tropical, with notes of mango and passion fruit. It’s properly hazy and lands on the sweeter side of most New-England-style IPAs, with a more delicate melon rind flavor that complements the beer’s juicier qualities.