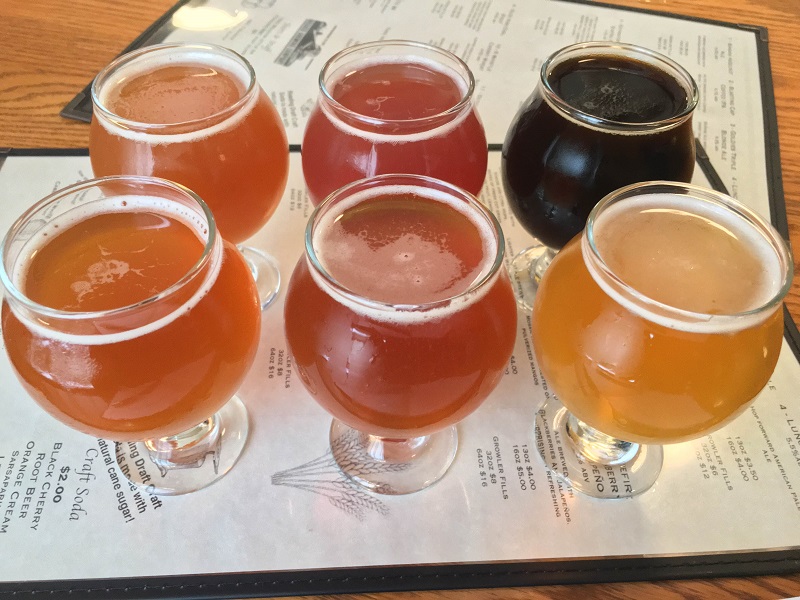 One can catch hints of the old coal industry lingering throughout northeastern Pennsylvania: the occasional jet-black culm banks of discarded mining refuse; here and there, a carved-away mountain side. The last few actual coal breakers, though—massive, sometimes city-block-sized processing plants for the mined rock—have been coming down in the past couple of years. Breaker Brewing (787 E Northampton St.) is a tribute to that past era, near what was the epicenter of the country’s anthracite-coal industry. Its current location (in a former St. Joseph’s School) fully opened a few years ago. Swing by for one 5-ounce sample of the dozen-ish beers for $2, three/$5 or eight/$12. As they used to say: It gets the coal dust out. –Ken Weaver

Naming simplicity. A bit heavy-handed for its style: light lemony acidity and firm saltiness lead, but using too much heft. Ends curiously, with lingering cereal toastiness like Corn Flakes and KiX.

The blackberries are quiet, while the peppers contribute a firm perimeter of unmistakable heat. Warmth lingers well past each sip, with bell peppers and dark berries ascendant.

The mango character throughout is super on-point: juicy, pulpy, fresh. Mosaic and Warrior hops fit seamlessly with soft bitterness and tropical notes, then descend into forests of pine and pith.

An IPA with Simcoe and Citra hops, though the hop bite’s subtle. This one rests a bit too heavily on its esters. (A version with Pacific Jade hops was lighter on the esters, heavier on the tropics.)

Breaker’s flagship. A pop of crispy pale malt and soft caramel, countered by floral and earthy hops with an edge of lemony citrus. A workhorse pale, built for multiple pints.

This hits a similar seam as the Lunch Pail Ale: straightforward, balanced properly and for broad appeal. Nothing super-deep, but a welcome respite of roast, coffee and dark chocolate.