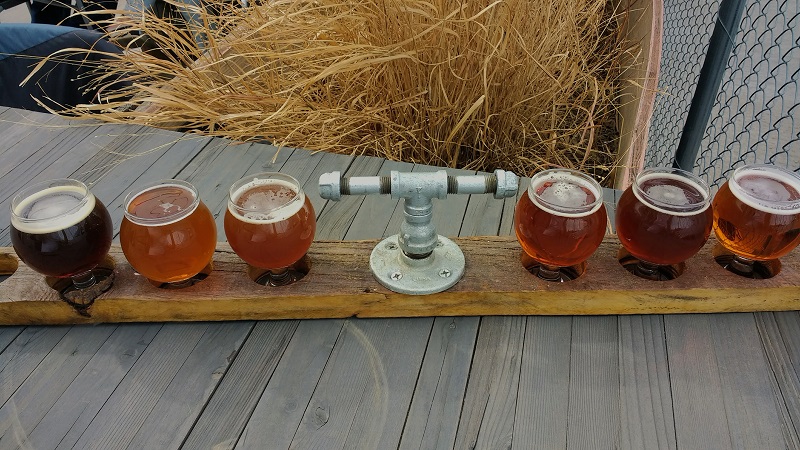 Black Shirt feels like what would result if Jack White decided, among his many other endeavors, to open a brewery. There are printed oil portraits of countercultural figures from Blondie to Bukowski on the walls; a strict, dark industrial decor of reclaimed wood and gunpowder-black metal; and, situated ever-so-nonchalantly in a corner, a vintage (of course) typewriter from which the brewery’s manifesto unfurls. I still don’t understand the only-black-shirts-and-red-beers credo, but that’s beside the point—like Jack White’s music, the beer at Black Shirt (3719 Walnut St.) is as simple as it is smart, virtuosic in its niche. And no matter where I find it, I will want more. Flights of four to eight 5-ounce pours run $10-$20. —Bo McMillan

Balance is the name of the game with this beer, which straddles sour stone fruit, juicy pineapple, flitting bitterness, and sweet coconut for an easy-drinking, copper-tinged pour with a finish reminiscent of Juicy Fruit gum.

With its chewy texture, nutty flavor and spicy bitterness, Common Red dances more accurately in a space somewhere between an ESB and a dunkel. It’s a refreshing stylistic innovation.

Grapefruit rind and bitterness distinguish Black Shirt’s flagship beer, which almost takes over any hint of sweetness from the moment it comes in contact with the taste buds. The twist: Those at our table detected a hint of smoke in the finish.

Walk into a granary, stick your face in a barrel brimming with product, and inhale deeply to get a sense of Altimate Secret. If you aren’t into hops, this is the beer for you (and still very tasty even if you are a hop head)—a turbid beverage that is all toasted grains drizzled sparingly with honey.

Lemongrass takes the lead on this surprisingly savory and fluffy gose, where the lactic quality is quiet enough to imagine it as a carbonated herbal tea. While imbibing, I dreamed of a sashimi accompaniment—nearby sushi restaurants, please take note.

A boldly boozy nose punctuates Black Beacon Storm, evoking a beer equivalent of a Manhattan cocktail. Other than a tinge of warmth on the throat, this beer is weirdly easy to drink, perhaps due to the nitrogen.