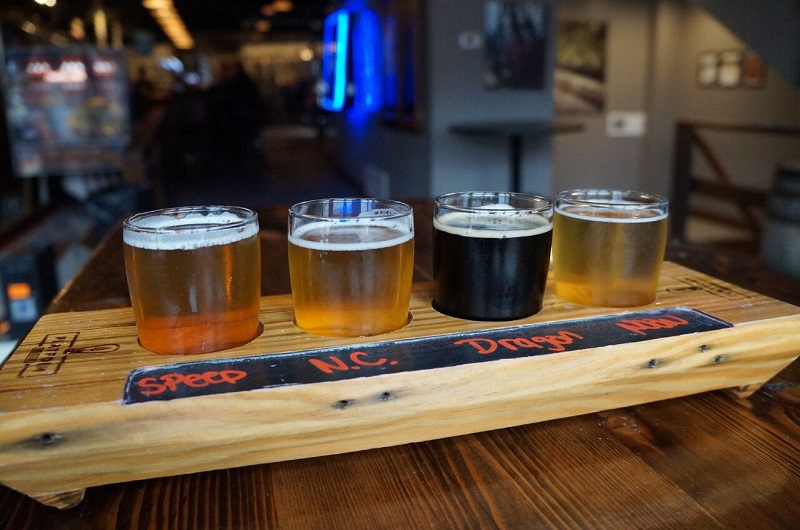 A flight at Platform Beer Co. in Cleveland, Ohio. (Photo by Rick Armon)

Since opening in 2014, Platform (4125 Lorain Ave.) has established itself as a hip destination. The 5,000-square-foot red-brick building once housed a small bowling alley. Now, an old-style arcade bowling game welcomes visitors as they enter, stainless steel fermenters line the area behind a long bar, and an outdoor beer garden beckons in the nice weather. The brewery is situated on the outskirts of Cleveland’s Ohio City neighborhood, which is brewing central for Northeast Ohio because it sports powerhouse Great Lakes Brewing Co. and Market Garden Brewery, among others. Platform also operates a separate production brewery in Cleveland and tasting room in Columbus. The cost for a flight of four varies by beer. This sampler was $10.50.–Rick Armon

Straw in color, this beer is made for easy drinking on a hot summer day. The German malt provides a welcome earthy, bready aroma and flavor. It’s crisp, clean and dry on the finish.

The nose on this amber-colored brew explodes with strong grapefruit and citrus character that follows through on the initial sip. The healthy, pleasant bitterness lingers in a dry finish.

Dark as a Tim Burton film, this delivers strong smoke aroma. But the smoky flavor, with almost a sweetness to it, overwhelms the roasted character of the porter on the finish.

The brewery promises prickly pear and lychee flavor in this ale. Promise kept. The fruit envelops the nose. The tartness puckers your mouth, but satisfyingly.