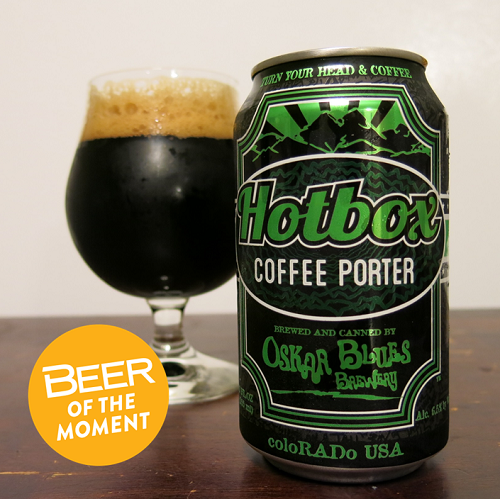 In our July issue, beer editor Ken Weaver wrote about The Latest Wave of Coffee Beers. We might also have called them the lightest wave of coffee beers, since the group included several coffee-infused blonde ales, cream ales, lagers and IPAs.

Of course, there were porters and stouts aplenty, too. The marriage between dark malts and coffee is a beautiful thing, and these more traditional coffee beers aren’t going away anytime soon. In fact, as Weaver noted, we’re likely to see even more as breweries begin to experiment with different origins, roast levels and methods of addition.

Oskar Blues Brewery is in a unique position to do plenty of this, given that the company launched Hotbox Roasters last year. The spin-off coffee brand offers a variety of fair-trade beans, which it sells online in aluminum Crowlers. It didn’t take long for the two companies to collaborate last year on Hotbox Coffee Porter, now available through November.

A quick sniff reveals the unmistakable aroma not of coffee, but of chocolate. It’s quite possible these sweet notes do come courtesy of the Burundi and Ethiopian beans used in the beer, or perhaps in combination with the grain bill. While the porter is heavier on the chocolate notes than one might expect going into it, seasoned cold-brew drinkers will recognize the sweeter and more rounded profile. There’s no acridness or sharp acidity here. Joining the chocolate is a little caramel, a bit of nuttiness and the faintest wisp of smoke. The beer is balanced by an assertive bitterness that belies the 30 IBUs listed on the can.

To say a beer tastes like coffee is as generic and one-dimensional as saying an IPA is hoppy, considering the myriad flavors each imparts. Those looking for those “typical” coffee notes won’t find them here, but that’s what’s great about this latest wave of coffee beers—they force us to rethink what coffee can be, what beer can be, and what coffee beer can be.

RELATED: Read About the Art of Brewing Beer with Coffee

Availability: Cans and draft from September to November