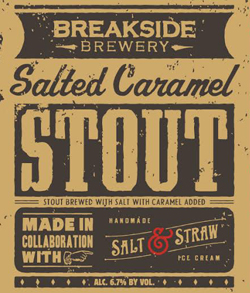 A collaboration with Salt & Straw Ice Cream, Salted Caramel Stout is brewed with two-row, chocolate, roasted barley, flaked barley and CaraMunich malts. It is hopped with Newport hops. As one of the brewery’s most popular draft seasonal brews, it is now available in bottles.

With enveloping caramel and chocolate flavor and a wisp of salt, my mind drifts to the boardwalk along the shore. A dark beer that makes me think of warmer days? What is this? This is a stout plus more, the kind of ale that shows American brewing ingenuity and does so with class and subtle style. In the confectionery world, salted caramels are popular these days, so it was only a matter of time before a brewery got in on the action. Thankfully Breakside was judicious with ingredients and did not release a candy bar in a bottle.
- John Holl

Certainly chocolaty and caramelly on the nose, this caramel- and salt-flavored ale has also a whiff of something like a Speyside whisky to it, along with the faintest tang of the seaside. On the palate, sweet caramel is tempered by roasted malt and nutty-spicy hop, kept by the latter on the dry side of cloying, while the satisfying finish offers a real or imagined suggestion of saltiness. All in all, a rich, full-bodied and wonderful brew I think would fare well alongside sticky toffee pudding.
- Stephen Beaumont