Politics aside, America is a nation bursting at the seams with people and places—and beers—that make it great. It’s a nation founded on big ideas, big endeavors and big cities (and bigger open prairies, woods and mountain ranges). From the giant redwoods to the Grand Canyon to, uh, the Super Bowl, this is the land of super-sizing. That applies to American beer, too, in the form of imperial stouts and IPAs and 64-ounce growlers. Rather than focus on what divides Americans, let’s take a journey to explore some things that are uniquely American. These largest thises or thats typically are not located centrally in beer meccas, but exist as roadside attractions on highways and byways. Fortunately, given that there are now over 5,000 breweries in this vast republic of ours, we can count on finding a brewery in the vicinity or just down yonder road.

There are fish tales and there are fish tails. According to the authority on the latter, the International Game Fish Association (IGFA), the largest muskie caught (on rec­ord) weighed 67.5 pounds. It was caught in Hayward in the northwest corner of Wisconsin. Fittingly, Hayward’s also the home of the National Fresh Water Fishing Hall of Fame (10360 Hall of Fame Dr.) where you’ll find a 143-foot-long muskie made of fiberglass (also, incidentally, the world’s largest fiberglass sculpture). 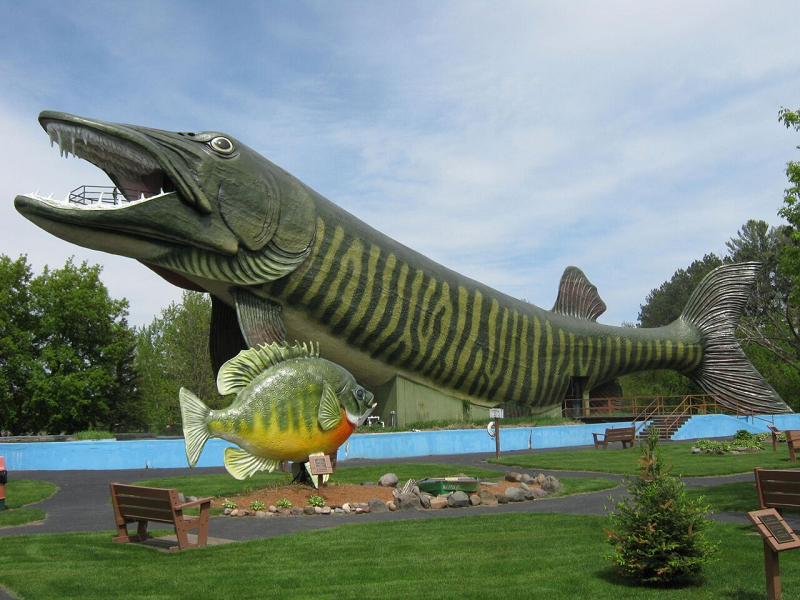 (Photo by Emmett Brown at www.freshwater-fishing.org)

After climbing into the tail and out through the mouth’s observatory overlooking the hall of fame’s grounds, make the sub-mile jaunt to Angry Minnow Brewing Co. (10440 Florida Ave.). It’s housed in a 19th-century brick building with a relaxed vibe, which you’d expect. Plan your visit for the Friday night fish fry. Enjoy fresh Lake Superior whitefish and wash it down with the dry-hopped River Pig American Pale Ale, although the brewer loves experimenting with IPAs.

I guess when you have 10,000 lakes, you get avid anglers fond of memorializing various kinds of fish. Located just over 200 miles to the northwest as the muskellunge spawns, this attraction pays homage to a specific type of muskie. This tiger muskie, so named for its stripes (guess what the spotted muskie looks like) also differs from its Hayward cousin in that it’s only 30.5 feet long but made of cedar, redwood and cement scales.

Roughly halfway between the two largest muskie monuments is Duluth. There are a few breweries, but check out Fitger’s Brew-house (600 E. Superior St. in Duluth). What makes winning three Great American Beer Festival medals more intriguing is that they were earned for a German doppelbock, a Belgian saison and an American framboise/sour ale. El Niño IPA is a perfect storm of sticky, citrusy hops and bass-heavy malts that makes it ideal for Fitger’s outrageously topped burgers (why stop at cheese when you can use cheese curd melting over poutine as a “condiment” or replace ripe red tomatoes with fried green ones?). 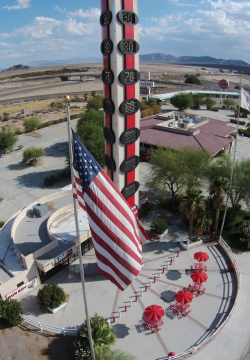 As with most roadside attractions, the object isn’t getting to it; it’s gawking at the thing as an excuse to stretch your legs on the way to where you’re going. Not far from Death Valley stands a 134-foot-tall thermometer—signifying one foot for every degree Fahrenheit that set the still-standing record for hottest temperature on Earth in 1913. Baker is the quasi midway point between the SoCal coast and Las Vegas. It’s got an assortment of fast-food outposts, but no brewery.

For that, you have to wait till you’ve reached your destination: Vegas, baby. Sin City is all about escapism—which is evident in one’s ability to hop from Paris to Venice to Egypt to New York all on the same street. Ergo, Chicago’s the best place to find honest-to-goodness real beer. Chicago Brewing Co. (2201 S. Fort Apache Road), some 10 miles off the Strip, has earned 13 GABF medals across a range of German, British and Belgian styles. Plus, the beer puns are strong. See: Wild West Tripel as an homage to Westmalle’s tripel, and Quad Damn It. Nothing slakes Vegas’ desert heat like a 10-plus percent quadrupel ale brimming with deep, dark fruit notes that pairs with the pub’s all-day specials like $6 breakfast burritos or sandwiches. Yup, this brewpub’s open 24 hours a day. 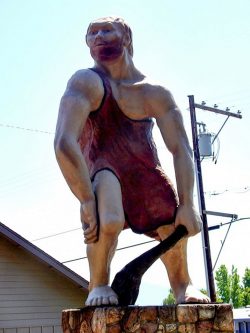 The world’s tallest statue, at 502 feet, resides in China, but in India, they’re working on one that will stand 597 feet tall. The Statue of Liberty, by contrast, stands only 151 feet tall. There’s the 75-foot-tall “Golden Driller” in Tulsa that, for our purposes, briefly sported a kilt recognized by the Guinness Book of World Rec­ords. Having said all this, the world’s largest caveman seems worthy of recognition here. Since 1971, the 17-foot-tall statue commemorates Grants Pass’ status as the gateway to Oregon Caves National Monument, and even the local high school’s mascot is the caveman. The statue’s expression is as dim as you’d expect a Neanderthal to be.

The town of Grants Pass in Southern Oregon is far from the beer-soaked metros of Portland, Eugene and more bucolic Bend. But it is coming up on the Beaver State beer map. Perhaps the spot most likely to make a big splash if it were in a more densely populated locale is The Haul (121 SW H St.), the exclusive taproom of Conner Fields Brewing. Part tasting room, part gastropub, part produce stand for the fertile Rogue Valley’s abundance of farmers and vintners. Conner Fields brews out of a barn on a vineyard and excels, naturally, at farmhouse ales. Zin Saison, made with Zinfandel grapes hand-plucked right outside the brewery, isn’t for cavemen or troglodytes, just progressive beer lovers. Robot Small, made with rice and Sorachi Ace hops, is a light, refreshing sipper for grown-ups, and there’s an abundance of house-made sodas to offer the same to kids and nondrinkers. 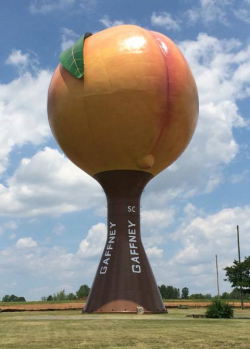 As far as the largest peach itself goes, that Guinness record belongs to an Autumnstar peach grown at Roseridge Orchards in British Columbia. How dare Canada steal America’s thunder for doing all things bigly? Hence, the title of largest peach shall be bestowed upon The Peachoid, the 135-foot-tall water tower that holds a million gallons of water in Gaffney. The city is the real-world home of the fictitious “House of Cards” president, Frank Underwood, and it makes a cameo in the series’ first season.

Gaffney is so far north it’s nearly southern North Carolina. But it’s decidedly Upstate South Carolina, so drop down a tad farther along I-85 and check out the spacious tap room at RJ Rockers Brewing Co. (226-A W. Main St. in Spartanburg). Here, expectedly, you’ll find the peach-infused Son of a Peach, a 5.6% sipper brewed with local fruit. For those looking for a punchier peach beer, there’s Peachy King, imperial Son of a Peach packing a whopping 9%. And available seasonally, look for the fresh peach Berliner Weiss. Of course it’s not all peaches. The brewery’s 17 taps also offer a cream ale, specifically Son of a Coconut Cream, that most assuredly would make for a tasty, interesting blend. The Palisade Pils gets a bit of help from the Northwest with Yakima Valley hops, and these Palmetto brewers take an even bigger cue from that region with the Cascadian Dark Ale, also available aged in red wine barrels, thus solidifying South Cackalacky’s place on the national beer map.

You knew we couldn’t wrap up a feature like this with no strings attached. Perhaps the most fabled item on any list of World’s Largest: the ball of twine. Truth be told, there are a few profoundly large twine balls. There are competing near-spheres in Minnesota, in Missouri and one in Lake Nebagamon, Wisconsin, near that muskie in Hayward. But the one in Cawker City looms largest. It started over 60 years ago and initially grew to only 11 feet in diameter when the creator, Frank Stoeber, became disentangled from this mortal coil in 1974. Since then, Cawkerites, or Cawkerers, hold an annual Twine-a-thon, and today the sucker is more than 40 feet wide, weighs 20,000 pounds and consists of 1,530 miles of twine. 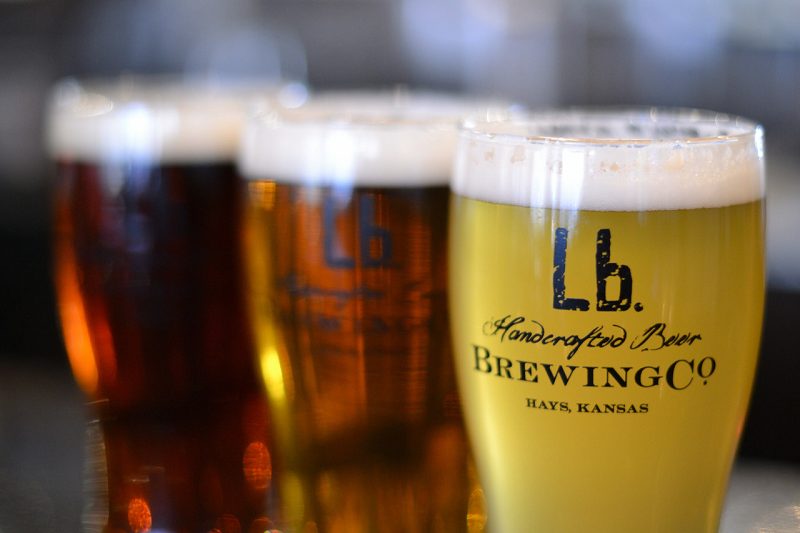 The best part about a pilgrimage to Cawker City is that it lies 90 miles northeast of the town of Hays on I-70. Hays is quite far from Lawrence, Topeka and Wichita, but it’s home to Kansas’s most decorated brewery at GABF: Gella’s Diner and Lb. Brewing Co. (117 E 11th St.). This brewpub has earned nine medals for its wheat beers and stouts. The clean and balanced beers coming out of this brewery make it its own destination. Although Kansas still bears much of its German heritage—the food menu is full of incredible dishes including Smothered Bierock (think beef stuffed cabbage then stuffed into a bready shell)—but many of the beers are decidedly American, including the floral Hefeweizen absent any Bavarian yeast characteristics.

Truly, as the third-largest country by mass, the United States and its menagerie of byway curios know few limits. Same, it can be said, for our breweries. Authors Doug Kirby, Ken Smith and Mike Wilkins first published Roadside America: The Modern Traveler’s Guide to the Wild and Wonderful World of America’s Tourist Attractions in 1992. Perhaps it’s no coincidence that it coincides with the first stage of post-Prohibition breweries and brewpubs between I-5 along the Pacific and I-95 tracing the Atlantic. Nowadays RoadsideAmerica.com maintains the biggest collection of monuments. It pairs great with BeerMapping.com, a full tank of gas and some empty growlers.