When Beer Meets the Farmers Market 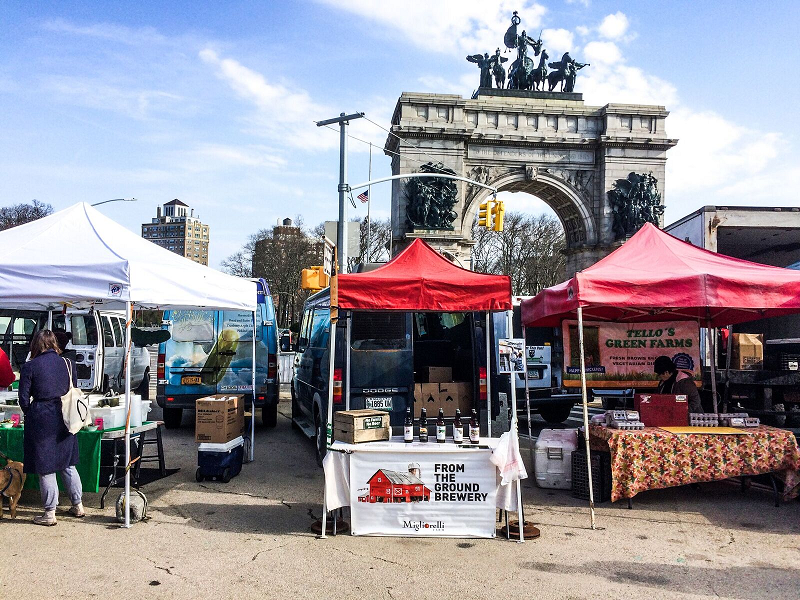 (Photo courtesy From the Ground Brewery)

On Saturdays at Brooklyn’s Grand Army Plaza, one can find fresh produce, breads, cheeses, honey, and, in one case, a vendor marked by an all-caps sign for “BEER” hanging above its stand amid the dense crowd of the weekly farmers market by Prospect Park.

“New York City is kind of overwhelming. There’s a lot of stuff and a lot of different things available,” says Jake Cirell, who presides over said stall as the owner of From the Ground Brewery. The sign, he says, draws attention to his wares and separates him from those overwhelming offerings. “People kind of come up to the booth and go, ‘Beer!’ ”

Beer at a farmers market may surprise some, but From the Ground isn’t the only brewery to make such a connection. Brooklyn Brewery’s former Greenmarket Wheat, in fact, was sold at and developed for New York City’s Union Square Greenmarket. Triple C Brewing in Charlotte, North Carolina, held a farmers market this year to celebrate a beer made with hops grown at the brewery, and Georgia’s Creature Comforts Brewing Co. hosts the Athens Farmers Markets.

In 1989, farmer and writer Wendell Berry proclaimed that “eating is an agricultural act.” Though perhaps not as explicit in its connection to agriculture as fresh produce, Berry’s dictum applies to beer, too.

“Obviously the Athens Farmers Market is a great way for us to engage our community, but it is even more exciting for us because we make beer, and that starts as an agricultural product,” writes Creature Comforts CEO Chris Herron in an e-mail. “We have a strong admiration for farmers, and we could not do what we do without them.” 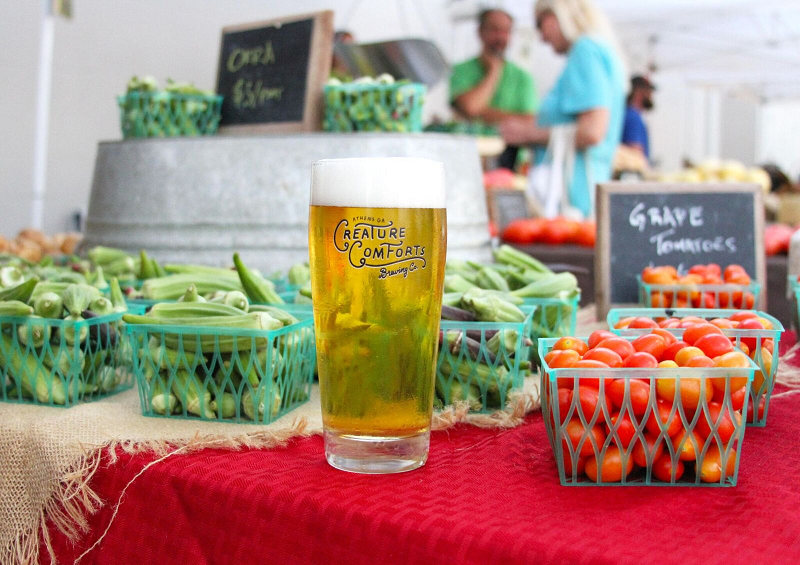 Creature Comforts incorporates local farm and farmers market ingredients such as wheat, honey, carrots and radishes (for a grisette) in its “Locally Grown” series. The brewery has also collaborated with vendors such as Golda Kombucha and 1000 Faces Coffee, and occasionally uses fresh produce from the market in its small-batch “Curious” series.

“Our goal is to highlight not just the unique ingredient, but rather to showcase a beautiful beer that shows how these unique ingredients can be used in a beer,” Herron writes. “Sometimes that is with a more fruit/produce forward approach, and other times we think it’s best to allow these ingredients to be more subtle. The goal is to work with the farmers on what they have growing and find a way to bring it to life through beer.”

From the Ground sources many of its ingredients, such as cherries and barley, from Migliorelli Farm in Red Hook, New York, at a location “10 feet from the brewery” says Cirell (From the Ground is located on the farm). Cirell also has used honey from Andrew’s Honey, a fellow Union Square vendor, for a saison, as well as herbs from the Grand Army Plaza market for an experimental chocolate mint stout and other various test batch products.

As a former professional chef and seasoned brewer, Rouben has frequented markets to connect with vendors and find out what’s new and in season. At Moody Tongue, which focuses on the link between culinary art and brewing, this love affair with farmers markets spawned a limited-run Farmers Market Beer series of hyper-local, small-batch beers such as Peeled Early Golden Plum Pilsner, Pressed Bubblegum Plum Lager and a Roasted Habañero Pale Ale.

“The goal there is to showcase these products,” he continues, “not only from a produce standpoint in the Midwest, but also from a brewer’s standpoint.”

Rouben has even partnered with farmers to grow certain ingredients in certain quantities for his beers. There’s a downside to this, however: “Mother Nature is involved.”

“Just because we want the ingredient, it doesn’t mean it’s going to have a great yield,” he notes. “I have to say, it’s kind of exciting to look forward to an ingredient and to work so closely with a partner who is growing something for you.”

These partnerships and interactions between farmers, brewers and consumers underscore that beer, as Herron says,
“is an agricultural product.” While beer at a farmers market might first seem like a novelty, it’s as at-home there as any fruit
or vegetable.

“Craft beer is growing, and people are really interested in it, but people aren’t going to a farmers market for beer,” says Cirell of From the Ground, explaining people’s general surprise to find his sign in Grand Army Plaza. “The concept of ‘what is beer,’ a lot of people don’t even know that. It challenges them to know that.”

Bo McMillan is an editorial assistant at All About Beer Magazine.