If you think about it, sizable chunks of taps at draft houses around the country constitute their own sort of unusual beer exhibit. Some brewers virtually trip over themselves to showcase strange ingredients on display in their beers. People just love to experience the weird. So in heading out to explore breweries around the country, it makes sense to visit ones that are near actual odd museums. After all, beer is its own work of art, but anything can be treasured when displayed properly. Here’s a smattering of the most bizarre collections curated under one roof along with some “only in (insert town here)” beers that can be enjoyed nearby. To defy convention, these appear by state in reverse alphabetic order. 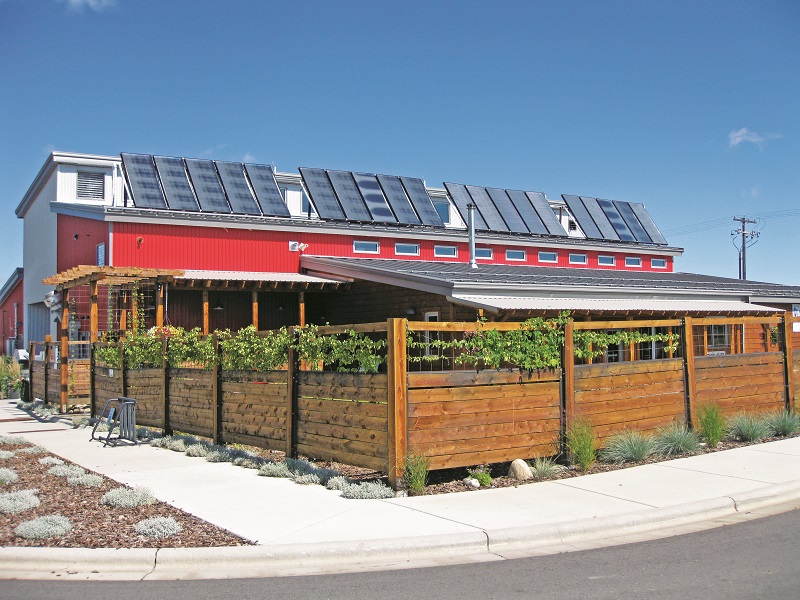 While not a museum, per se, the star attraction in Cody, Wyoming, is the five-story Smith Mansion (2891 N. Fork Highway), a loony log cabin built single-handedly by Francis Lee Smith. It was inhabited by the Smith family for years even as Smith toiled using nothing but lumber and his own whimsy. He died during the 12th year of construction, not from his first fall, but his final. There are no breweries operating in the greater Cody metro. There’s Buffalo Bill Cody Beer with an address in Cody, but it’s contract brewed. Oddly, the closest brewery isn’t even in Wyoming despite being just 30 miles from the east entrance to Yellowstone National Park. Instead, head 87 miles north to Red Lodge Ales (1445 Broadway Ave., Red Lodge, Montana). The most popular beer is Bent Nail IPA, but the brewer clearly has a penchant for bocks, with five among the seasonal offerings, including Dos Goatees Doppelbock. And if you’re craving some more oddball, maybe you’ll get to meet the in-house Beerbarian—replete with shaved head, unkempt beard and his kilt. 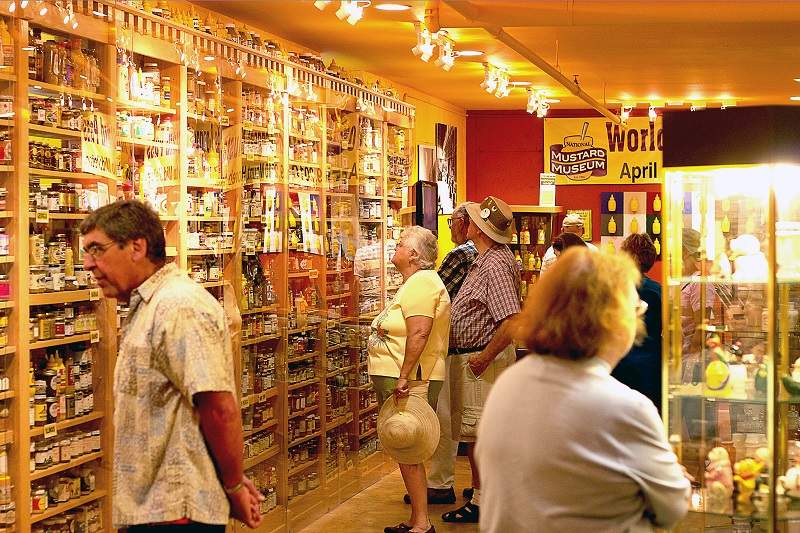 In an ill-advised career move, Wisconsin State Attorney General Barry Levenson quit his job after several years of collecting mustard—that quotidian condiment found in all of our households unless you’re allergic to mustard seed or all things yellow—and opened the National Mustard Museum (7477 Hubbard Ave.) in Middleton. Although, with well over 5,000 hot dog toppers from over 70 countries, it oughta be the International Mustard Museum. After virtually traveling through the wide world of ’stard via the MustardPiece Theatre and sampling hundreds of varieties, it’s a five-minute walk to Capital Brewery (7734 Terrace Ave.). Capital specializes in easy-drinking beers like Supper Club, billed as a Wisconsin lager, and Wisconsin Amber, billed as, well… That’s not to say Capital doesn’t let its freak flag fly, as demonstrated in Eternal Flame, an imperial stout with cocoa nibs and habaneros. Nearby in the great beer town of Madison, Ale Asylum (2002 Pankratz St.) makes great-tasting beers and saves the madness for its names such as Madtown Nutbrown (a classic brown ale) and Demento (a citrusy session IPA wherein the low alcohol helps maintain one’s sanity).

A second-generation master plumber named Barney Smith has turned his love of commode canopies into the garage-based Toilet Seat Art Museum (239 Abiso Ave.) in San Antonio. People may flock to the city with the intent to “remember the Alamo,” but a visit to this Alamo Heights neighborhood attraction is one you’ll never forget. One of the thousand-plus decorated toilet seat lids features the iconic image of Lucy and Ethel working in a chocolate factory and reads “Speed things up a little.” Another features local police badges, making it a good seat to make a rest. Unfortunately, here comes the part where we have to match toilets with beer. There are a handful of breweries in San Antonio, but a 15-minute drive away from Barney’s is Ranger Creek Brewing & Distillery (4834 Whirlwind Drive). The “brewstillery” focuses on small-batch experimental brews. Guests showing up for a tour or to sample these rare offerings may find a sour apricot ale or an imperial brown ale aged in the distillery’s own Texas Bourbon barrels.

The only instrument more ridiculous than a keytar (you know, the keyboard guitar) is a kazoo. That’s because everyone can play it yet next to no one can make it sound good. And that goes double for all the kids who receive one as party favors. But don’t let that stop you from visiting the Kazoo Museum (12 John Galt Road) in Beaufort. From the device’s 19th-century roots to its 21st-century future, there are some 200 pieces on display of what are essentially megaphones for humming. And in the time it takes to hum Iron Butterfly’s “In-A-Gadda-Da-Vida,” you’ll find yourself at River Dog Brewing (591 Browns Cove Road. N., Suite H) in Ridgeland. Located near Hilton Head, as well as Savannah, Georgia, this brewpub offers a barrel-aged wild peach ale (as one would hope to find in South Carolina), but what visitors are prone to find is a colorful array of IPAs, meaning pale in color and otherwise. River Dog IPA is copper-hued and citrusy, while Doovalacky DIPA relies on a fruit cocktail of New Zealand hops. There’s also Bowfin India brown and Altered State India red and enough others to keep guests humming along nicely.

Where else on earth can one find both the world’s largest pig hairball and authentic monastic beers in the same celestial setting? The Mount Angel Abbey (1 Abbey Drive ) in Mount Angel, home to Benedictine monks since 1882, offers visitors a fascinating range of activities from prayer services and meals with the monks to a museum featuring, among other items, curiosities of the Pacific Northwest. There’s a taxidermied calf that has six legs because it’s essentially  a calf with its semi-formed sibling emerging from its belly. There’s also a display of porcine hairballs. Most look like bocce balls. But one looks like the offspring of a beaver and a coconut. Once finished gawking, it’s time to seek cloistral refreshment. It’s worth noting that even before the monks started brewing, there was a long-running commercial hop yard at the monastery. The beers from the Benedictine Brewery are sold by the case and only available at the Abbey even though, initially, other breweries up in Portland like Belgian-leaning Upright are being contracted. As expected, or hoped, the beers are Belgian in origin yet Oregonian (read: hoppy) in temperament. The latest release, Saint Benedict Farmhouse Ale, takes the West Coast approach even further with notes of lime and grapefruit zest, along with classic farmhouse ale whiffs of pepper and spice. While here, pick up some mustard from the Benedictine Sisters. There’s even a Monastery Mustards gift shop in town (840 S. Main St., Mount Angel) selling all 16 varietals from Hallelujah Jalapeño to Holy Hazelnut. If you’re looking for the best time to visit, it’s worth noting that the Oktoberfest in Mount Angel has been running since 1965 and attracts some 350,000 attendees who love beer and anything you’d put mustard on.

Many of the strange museums listed here are free attractions, but not so the Silverball Museum (1000 Ocean Ave.) at the Asbury Park Boardwalk. Actually, it’s more like a curated classic arcade, and, come to think of it, the machines here are set to free play. You just have to pony up at least $7.50 to enter for half an hour, or up to $25 to play all day (or until carpal tunnel sets in). But once inside, channel your inner Pinball Wizard as you choose from over 100 machines—a menagerie of pop culture through the generations—that date back to 1933. Bring the kids to show them what gaming was like before gamers were first-person shooters, or consoles fit in their pockets. Afterward, head 3 miles due west and put those supple wrists to equally good use by tossing back samples at Kane Brewing (1750 Bloomsbury Ave.) in Ocean. Kane has quickly become a darling of the Jersey scene, and with a broad spectrum of Belgian and American influenced beers, it’s not surprising. Why drink with the season when, if available, you can drink with the daily meridians courtesy of beers like Mexican Brunch (an imperial milk porter made with coffee, maple, cinnamon, cacao and ancho chilies) and Evening Bell (more portery goodness)? One of Kane’s more unusual as well as coveted offerings, Malus, is a Belgian-style dark ale. As an interesting twist to the style that’s traditionally brewed with candi sugar, Kane uses a cider reduction. You’d be hard-pressed to call this beverage a graff—a mixed fermentation of cider and beer—and the result tastes like a spicy strong ale but leaning away from molasses and dates and toward apple pie.

Let’s face it, no museum or exhibition could be stranger to marvel at than the Las Vegas Strip itself. Venetian canals, pirate ships and a sphinx-guarded pyramid all lined up in the middle of the Nevada desert are already stranger than fiction. But in a city that trumpets its sex appeal, the Erotic Heritage Museum (3275 Industrial Road) is a 24,000-square-foot paean to pleasure, courtesy of a professional tryst between a preacher and a pornographer. Lest you think it’s mostly a museum of the pornographic arts, consider that recent thought-provoking exhibits have focused on “Sex in the Third Reich” and “In Space Nobody Can Hear You Humping: Breaking NASA’s Silence about Sex in Space.” The climax to an odd Vegas getaway is a trip to Chicago. It’s not a hotel made to look like the Sears, er, Willis Tower. Chicago Brewing (2201 S. Fort Apache Road) is a brewpub specializing in deep-dish pizza and racking up Great American Beer Festival (GABF) medals. Some of its 13 medals to date are for beers that sound like they came from the erotic museum—All Nighter blond ale, Daisy Chain tripel—but its the current tripel called Wild West that earned Chicago Brewing a gold medal last year. For the bold imbiber, look for Quad Damn It, a Belgian-style quadrupel ale imparting toffee and molasses, which has earned a couple of GABF medals of its own.

Kansas: Museum of the Odd 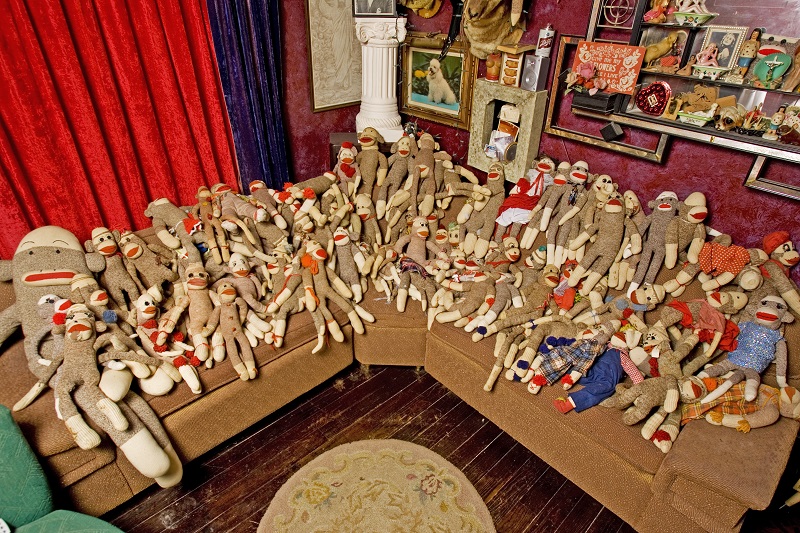 This “museum” in Lawrence makes the list more for its title—can any destination befit a collection of oddball museums more than a place called Museum of the Odd? (1012 New York St.)—than for its contents. Sure, there are some 500 different sock monkeys, but many homes have sock monkeys in them. Then again, 500 strange toothbrushes would be pretty fun, too. The museum, housed in Jay Walker’s house, is more a testament to his hoarderism. In fact, speaking of toothbrushes, there’s one from Ray Charles. And Tom Thumb’s glove (yes, it’s for a whole tiny hand, not just an opposable digit). Weirder still, in the state that was first to enact Prohibition, Free State (636 Massachusetts St.) is one of the oldest-running brewpubs in the country, since 1989. This community-oriented pub pours a wide range of beer styles, but flagships like Ad Astra Ale, for fans of malty ambers, and the smooth-drinking Wheat State Golden yield true tastes of Kansas.

This museum is for hammers, hammers and more hammers. “Mankind’s first tool.” Set in Haines and located on the Lynn Canal—the deepest, longest fjord in North America, eh—most travelers come to be awed by snow-capped mountains and hanging glaciers, but some, ostensibly, come for the Hammer Museum (108 Main St.). According to legend, there are over 1,000 of the tools on display, but the owner has some 6,000 more too precious to share. And if you didn’t get your fill of hammers there, it’s just a three-minute walk down Main Street to the Haines Brewing Co. (327 Main St.) where you can drink a barley wine called Bigger Hammer.

The caramel beast clocks in at 11.5%, so swing or swig one too many pints and, sorry, you’ll be hammered. For distinctly local flavor, try Captain Cook’s Spruce Tip Ale, now made with estate tips grown in the brewery’s new, larger beer garden.

Brian Yaeger is the author of Oregon Breweries and Red, White and Brew: An American Beer Odyssey. He is an oddball.