How to Pair Beer and Cheese 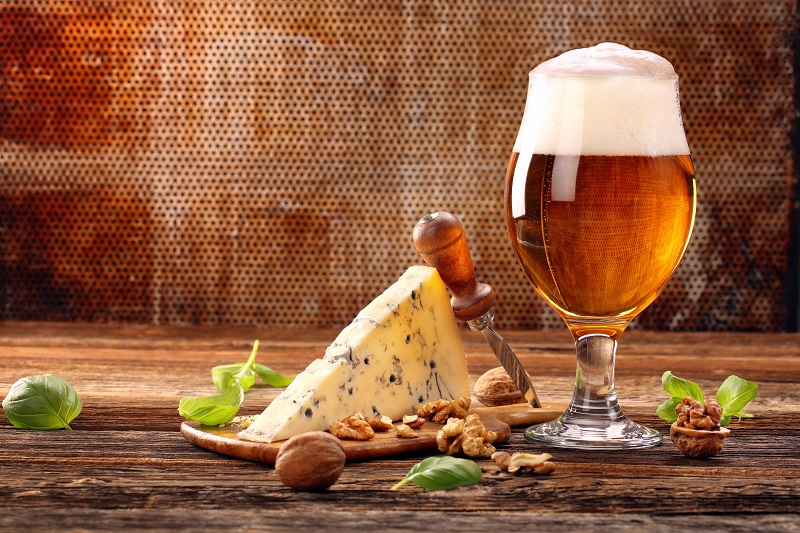 Learning about beer and food can be a ton of fun. Any beer pairing dinner will feature lively interactions carefully put together to show off the best in the beer, and if you’re paying attention, you may pick up on a few general principles and a few hints and tips.

But what if you want to make a serious study of it? Most dishes have several ingredients working together in particular ways. It’s a little overwhelming trying to untangle it all in the context of a beer and derive some general principles from it. That’s why I suggest you start with cheese.

Cheese is profoundly complex, but when it’s in front of you, it’s just one thing. It’s much less bewildering than a main dish, or appetizer. Cheese shows clearly how beer and food can interact, and it’s easy because every beer and cheese has a multitude of perfect pairing partners.

So what are the goals for a great beer and food pair? First, I guess you’d say, “Do no harm,” which means both partners should play nicely and not stomp all over the other one. This is usually stated as trying to match intensities, or at least avoid a collision of one big, bold partner with a much more delicate one. It’s pretty basic. You just have to consider everything in the beer from the alcohol and the bubbles to potentially intense elements like bitter hops and roasted malt. The same summation needs to be made of the food elements. In cheese, we’re talking about things like fattiness, salt and pungency.

The real goal is to achieve what the Brazilians call harmonizacão, or harmonization, meaning a real relationship where each partner changes in interesting ways and often creates a third set of sensations springing synergistically from the food and the beer. Aroma sets the stage. Similar aromas, when they can be found, tie the pair together. Beer often has caramelly notes. Cheese, especially aged varieties (think 18-month gouda), also can be a bit caramelly, so there’s a link. Hops have herbaceous aromas that can resonate with the herbal notes in blue cheese. And of course we can look to cuisine for things that are harmonious without being similar: roast and meat; bread and butter; fruit and cream; and so on. Once you start paying attention to these, you’ll find plenty to work with.

Finally, there are the tastes on the tongue as well as mouthfeel. There are fewer tastes than aromas, but they need to be balanced carefully. Cheese has some acidity and umami, varying degrees of saltiness and usually plenty of fat. We’re fortunate to be working with beer, as it has qualities that are ideal for dealing with those rich, palate-clinging tastes. First, carbonation physically scrubs all that stuff out of your mouth, leaving you ready for more. Bitterness cuts through fat, so it can be helpful with rich cheeses, especially when they’re robust enough to tolerate the intensity of hops. Alcohol is a pretty good fat solvent, and so a high-alcohol beer can work great with a high-fat cheese like triple-crème. Beer is acidic, sometimes intensely so, and that can also help cut through fat. The rich proteiny taste of umami is something people just want to linger on and savor. It turns out that amber and brown beers, if they’re not too roasty, enhance the experience of umami, which is one reason brown beers are generally pretty good food beers. Salt can be a wild card. It’s very friendly to toasty and roasty and can minimize bitterness, but sometimes can be one flavor too many, especially when sweetness and bitterness are already in the pairing.

Usually if you find one combination that works, you can scale it up and down and find that the core concept holds together. If blue cheese and IPA works, then stilton (a very strong aged blue) and barley wine will also, and on the other end of the scale, so should blue brie with a hoppy pils.

People always ask: “Should I eat the cheese first or drink the beer?” After the first taste, it obviously doesn’t matter. I’m a beer guy, so I say taste the beer, but I probably would feel differently if I were a cheese maker.

Cheese varies widely in its character and depth of flavor, and actually parallels craft beer in terms of its artfulness. A regular grocery might have little in the way of artisan cheese, so you are better off shopping at a specialty shop or gourmet market that has people behind the cheese counter. In my experience these folks really enjoy beer and have great suggestions and insights. I rely on them frequently.

It’s also helpful to learn your way around the cheese landscape. Cows, sheep and goats each make very different milks, and each impacts the cheese in different ways. In production, cultures, natural or otherwise, may ferment the milk, changing and adding flavor. The middle of the process is all about water removal, which obviously affects the texture, but also how hard the cheese will be, how long it will age and how intense its flavors are. Different aging techniques affect the final cheese, as do secondary treatments like the injection of penicillium fungus that adds its delicious moldiness to blue cheese.

Putting together a small-scale cheese and beer tasting is among the simplest gourmet adventures you can have. Pick half a dozen cheeses, trying to mix things up: get at least one goat and one sheep; try to have some soft and some hard, one blue, one washed rind (the stinky type that comes in many degrees of stinkiness), one aged. Now that you have cheese in your basket, try to visualize the flavors and imagine which beers might pair well with them. Medium-intensity beers are usually good bets with cheese. As I mentioned, don’t be afraid to ask for help from the folks at the cheese counter. And just below, I’ll detail a few pairings I think generally work.

Harder cheeses are best pre-cut. I like to cut each cheese differently to make them easy to tell apart. Harder cheeses need smaller pieces as they’re more intense, but I like these to have a lot of surface area, so very thin tapered slices or irregular matchsticks; some softer cheeses can be just served with a knife or spreader as they glue themselves back together after cutting. For just a little taste, 1/4 ounce (7 grams) is adequate; half ounce per cheese is fine. If people are really eating, a little more. Bread is optional. For educational purposes I find it gets in the way, but for more casual tastings, it makes the whole thing feel more like food.

So here are a few pairings I always have a great time with:

1. Hefeweizen with fresh mozzarella. It seems strange until it’s in your mouth, where the milky creaminess of the cheese encounters the fruity, almost peachy aromatics imparted by the yeast, plus a twist of spice on top. Really makes you think of peach ice cream.

2. Amber to brown ale or lager with a washed-rind cheese. Recognizable by their orangish rind and gooey interior, these cheeses also offer varying degrees of cheesy funk. Despite their aromatic intensity, the inside of the cheese (experts call it “paste”) is very mild, so the beer can’t be too bitter or roasty. Done right, you get a “liquid-grilled-cheese-sandwich-in-your-mouth” effect. If you’re frightened by funk, ask your cheese merchant for a milder one.

3. Blue cheese and IPA. We normally don’t think about the mold of blue cheese having an herby quality, but when you put it with hops, it just explodes. Also, the cheese is pretty fatty, and the bitterness just blasts it away, while at the same time the cheese reduces the perception of bitterness.

4. Triple-crème bloomy-rind with doppelbock or Scotch ale. Played against this rich, salty-buttery cheese, the dark malts and beer’s sweetness creates a sort of chocolatey/caramelly cheesecake effect. If you want an alternative for a very different kind of pairing, a Belgian strong golden or tripel works great.

5. Three-year gouda with imperial stout. This super-aged cheese is caramel in color as well as flavor, with a lot of meaty and buttery notes. Pair it with a big, dark beer and you put meaty, roasty, caramelly and salty together. If you think about a cheeseburger, it’s all there but the pickles.

Getting to know beer and cheese is an ongoing process, but a very fun, rewarding and social one. In addition, it will help you grasp the basics so you can move on to more complex dishes. I urge you to get out there and explore this fascinating combination, slice by slice.