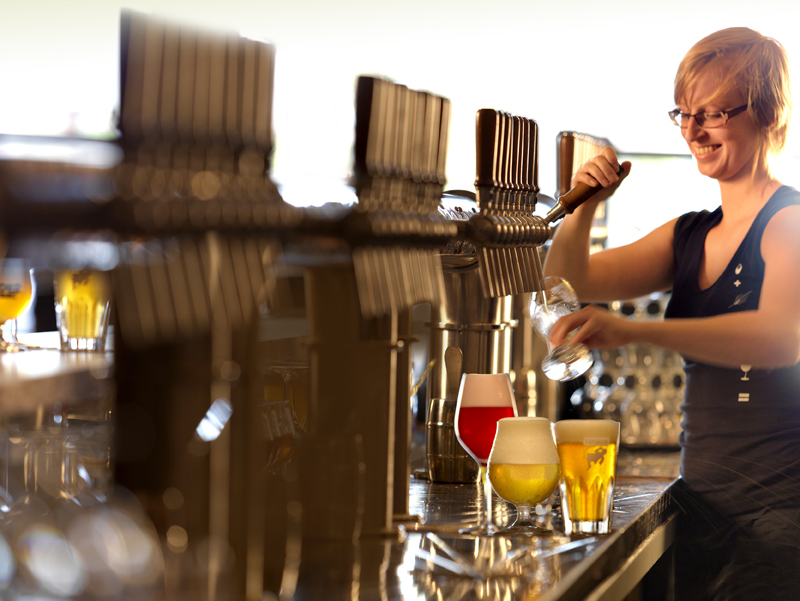 Beer is as much about the environment where it is enjoyed as it is about taste and aroma. This is especially true for Belgian lambics, which are produced by spontaneous fermentation from native yeast strains.

For the beer adventurer, there is nothing quite as exciting as the world of lambics. These exotic beers earned a pedigree by virtue of their long-perfected artisanal brewing techniques.

The romance, however, doesn’t end with the finished product. Following the trail of lambics, you will inevitably end up at a classic café where the art of lambics is fully appreciated.

Belgian lambics—tart, sour, yet refreshing beers—are produced by spontaneous fermentation and aged in wooden barrels before being blended. The style is often considered one of the most complex in the world.

These beers range from mildly tart to very tart, with very refreshing, dry and often “funky” characteristics. The dryness comes from the tenacious nature of Brettanomyces bruxellensis and other yeast strains, which eat nearly all the residual sugars in the beer.

Today, lambic brewers typically produce wort, a base, unfermented beer, by a process somewhat similar to most other modern-day brewers. They heat a mix of about 65 percent barley and 35 percent wheat with warm water, in a mash tun. The wort is then pumped to a boiling vessel, where most of the lambic breweries will boil their wort for at least four hours.

The second step in the creation of a lambic is when the hot wort is pumped into a vessel called a koelschip (English: coolship) where it sits overnight and cools. Wild yeasts that exist in the air in that region of Belgium fall into and begin to ferment the wort, which will in time become beer. At this point, the resulting liquid is very tealike and a bit sweet. The next day, the wort is transferred to oak or chestnut barrels, where it will be aged for as little as a few months or up to three years. This beer is known as straight lambic and is often sold unblended in cafés in the Payottenland (Pajottenland in Dutch) and Zenne Valley.

Lambic with just a few months of aging will be very cloudy and wheaty. As the yeasts continue to eat the sugars and starches, lambic will often become much deeper amber in color, and the cloudiness will disappear in time.

With six months to a year of age, tartness is developing, yet the beer is still young. This is known as jonge lambiek. Lambics with two to three years of age are typically more tart, complex and bone dry.

Lambics of different ages, typically one, two and three years old, can be blended to make oude gueuze (geuze in Dutch). This brew is perhaps the one most akin to Champagne in the beer world. The complexity of the blend comes from the older lambic, while the young, 1-year-old lambic adds just enough carbon dioxide, along with a small dose of sugar at bottling, to spark a refermentation in the bottle. A gueuze can have a high level of carbonation and a beautiful foamy head, and an extraordinarily complex set of flavors. Tart, refreshing and with an intense mouthfeel, this is one of the world’s supreme beverages.

Straight lambics of about 6 months to a year old can also be steeped with fruits such as cherries or raspberries to create kriekenlambiek or frambozenlambiek. Kriek—sour cherries—steeped in lambic and blended with lambics of different ages can be blended to produce oude kriek. The result is often a breathtakingly tart, deep, rich and fruity drink that can be one of the most complex in the world. The same can be said for framboise, which is less common, as the fruit, raspberry, is harder to work with than cherries.

A lambic blender is a steker, and a blendery is a geuzestekerij in Dutch. These producers buy fresh wort from lambic blenders the morning after it has been in a coolship and then put it in their own barrels and age it, just as the brewers do. However, each lambic brewery and blendery has its own house character, so all make very distinct beers. Three breweries, Boon, Girardin and Lindemans, produce most of the wort used by the handful of lambic blenders in Belgium. The blenderies are De Cam, Hanssens, Oud Beersel and Tilquin. Note that 3 Fonteinen has its own new brewery as of 2013, but still blends wort from other breweries in its beers.

Beer is as much about the environment where it is enjoyed as it is about taste, color and perception. Drinking an altbier at a brewpub in Düsseldorf, for example, just feels more satisfying than having one at your corner bar. Ditto the beers of Belgium’s lambic country.

Lambic, and its popularity in its homeland, has helped produce a plethora of bars and restaurants where these beers are a central focus. Some venues are classic old pubs with interiors dating to the 1920s, and others are bright, airy, new, modern locales.

Cafés are usually bars that don’t serve hot food. Small plates of cheeses and meats might be offered, as well as packaged foods. There are many cafés that do serve food, but don’t discriminate if you wish to drink and not eat. Restaurants typically do require that you eat to enjoy their atmosphere and beers, but you still might be able to visit and just drink during the hours between lunch and dinner, say 3 p.m. to 6 p.m., and late nights, perhaps after 10 p.m. or 11 p.m. However, Belgium is a complicated place, and it’s really up to the owner of the establishment to set the rules.

Much of lambic country comprises the area south and west of Brussels, in the Pajottenland and Zenne valleys. This region is filled with rolling countryside, farms, small villages and a few larger enclaves. Many of the buildings date to the 16th to 19th centuries, and there are a lot of historical sites to see. Friendly local people inhabit the cafés, and they are almost always interested in and happy to see foreign beer lovers enjoying their local drink in these often quiet, rustic places.

What becomes immediately clear is there are lots of variety, pride of place and product, and one of the world’s great beer destinations.

Charles D. Cook
Charles D. “Chuck” Cook, has traveled to Belgium 27 times since 1994 to explore, experience and enjoy its incredible beer culture. He has visited over 150 Belgian breweries and 350 Belgian bars, and has written for various publications, and his own website, DrinkBelgianBeer.com.