A Locavore Addresses the Elephant 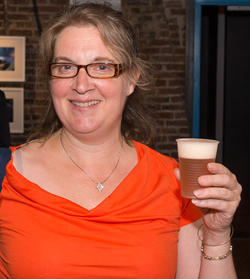 As I reflect on my journey into craft beer, I feel obligated to address the elephant in the room, the same pachyderm that many of us in the industry delicately tiptoe around in an effort to avoid being hip-deep in a pile of dung. My family has a long—sometimes colorful, sometimes bleak—history of alcoholism that has gone hand in hand with libation. Having opted to work in the industry, I regularly ask myself, “Why am I drinking today?” Or, “Is my job just an excuse to get drunk?”

My childhood beer memories revolve around my dad’s alcoholism. Back then, genome sequencing was a sci-fi dream, but I knew that my dad had a “problem” (cured when he gave up drinking on his 40th birthday; he’s been sober 37 years). Genetics certainly played a role: His dad drove a beer truck for a living and died from cirrhosis. My dad also had a habit of combining drink with work, being an academic adviser to a fraternity at the local college. I vaguely remember beer-drinking parties being a lot of fun, but there was obviously a dark undertone to my father’s way of imbibing, a thin line between vivacious and violent. We had to tread lightly when daddy was drinking.

My mom often reminisces about her own childhood, walking into town with a bucket to bring beer back for her father. Her reward? She got the first sip. The kids on my mom’s side of the family all had an early acquaintance with alcohol in the “European tradition” of drinking, but the fact that we are raising a fourth generation of potential alcoholics causes me some discomfort.

Having seen my own parents drunk and feeling helpless to do anything about it, I admit no small amount of guilt at being drunk in front of my own kids. I’ve also stood behind a bar, watching colleagues drink on the job, wondering how many they had before they showed up at my work and how many more they’ll have before calling it a day. And then I look in the mirror and know, “There but for the grace of God …” It’s easy enough to “just say no,” but the reality is that many of us in this line of work are predisposed not just to like our potent potables, but also to abuse them.

I never planned on working with alcohol, despite the fact that my first “real” job was managing a craft beer bar. Of course, back in the late ’80s, that’s not what we called it. Goatfeathers Coffee Bar & Restaurant in Columbia, SC, was better known for its cappuccino and cheesecake than for the 80-plus bottles of beer in its inventory. As students were guzzling Coors, I was getting acquainted with Orval, Old Peculier and Samuel Smith brews. American beers were limited to the stalwarts: Anchor and Sierra Nevada. The first ­really interesting beer I tried was Brouwerij Lindemans’ framboise. It was a revelation. Despite this fecund environment for craft beer experimentation, I spent more time sober than sipping suds. I didn’t know how to balance my desire to drink with the demands of running a bar. Moderation never seemed to be on the continuum.

When I moved to New York in 2007, my personal and professional lives quickly went the way of the economy. I felt that I was losing my mind completely, and drinking to block all that out was an easy choice. I was desperate to find community, which I stumbled upon via the local food movement. I found my place as a locavore among farmers and artisanal food purveyors who made the city less formidable.

Working in the locavore community proved auspicious, as I quickly became acquainted with Jimmy’s No. 43 in New York’s East Village, where I sampled many craft beers in the rotating draft lineup. I met brewers and distributors, and my “beerducation” grew with new opportunities.

Finding a community that embraced craftsmanship over profit margins and good taste over cheap ingredients didn’t exorcise me from excessive drinking. The fact remains that I still need to ask myself, “Why am I drinking today?”

By matching my love of local food with a love of great craft beer, I can mitigate some of the dangers. Craft beer has provided a way for me to drink what I love in a way that nourishes my spirit rather than racks my body. Yet I need to be aware at all times that I’m not crossing a line. Oh, and I don’t drink on my days off. It’s a delicate balance, but keeping tabs on my genetic predisposition is how I play in the craft beer world with the cards I was dealt at birth.

Astrid Cook
Astrid Cook is a NAGBW member and old-school journalist who writes fiction in her spare time. She blogs at brooklynbeerbitch.com and astridcook.com.