Devotees of Dylan Thomas head to Laugharne, a Welsh village that sits at the mouth of the Taf River, to peer into the famed poet’s writing shed, which gazes upon the scenery that served as his inspiration. From the shed’s windows, Thomas studied the landscape and strung together lines that readers still marvel at today. Take his eulogy to the birds that die blithely in the poem Over Sir John’s Hill. It begins: “Over Sir John’s hill, / The hawk on fire hangs still; / In a hoisted cloud, at drop of dusk, he pulls to his claws / And gallows, up the rays of his eyes the small birds of the bay”.

While much of his writing in Laugharne was penned in that shed, nature hadn’t been his only muse. The pub also served as an equal partner in elevating his creativity.

Though some associate alcohol as a culprit in Thomas’s death at age 39, this claim is no more substantiated than the others: he died from complications from pneumonia, a doctor’s miscalculated injection of morphine, or the influence of New York—the place of his death—where he indulged in the cocktail of fame and money.

What is verifiable, however, is that Thomas’s afternoon writing sessions were always preceded with his ritual visit to the pub at Brown’s Hotel. While most Welshmen in small-town Wales visit the pub because it is a social center more than it is a watering hole, Brown’s served as a Petri dish for Thomas’s prose.

“I must go and play darts in the cheerless bar,” he wrote to a friend, suggesting that his visits were more about labor than leisure, “put my flat beer on the slate, listen to talk about swedes and bulldozers, Mrs. Griffith’s ulcer, what Mr. Jenkins said to Mrs. Prothero who is no better than she ought to be, the date of Princess Margaret’s birthday, the price of geese, Christmas coming—oh, horrid thought!”

It was in this drivel at Brown’s, however, where he had gathered his gems. Eavesdropping on neighbors at the pub, for instance, delivered the eccentric cast for his play of voices, Under Milk Wood, which parodies life in Laugharne.

Just before my visit, I read Thomas’s Laugharne, a radio broadcast in which he describes the place as one that “will all be the same in a hundred years’ time.” I wanted to see if this setting was still intact.

When I walked into Brown’s, change had occurred. Brown’s had ridden the coattails of its most famous patron, turning pub into shrine. Thomas’s pictures, book covers, and the dartboards that he had played on decorated all walls.

As this year is the centenary of Thomas’s birth, I found it unlikely that the three local men at the bar had known Dylan Thomas. But the eldest of the group, Graham Thomas (of no relation to the poet) had been a teenager when the writer had died.

“He’d sit in the corner, have a pint of the bitter, and go home at three,” Graham Thomas told me, as we sipped our bitters together.

I had always loved Dylan Thomas’s description of this choice beverage in Old Garbo, an autobiographical short story where he pauses from plot to salute the intricacies of this libation Graham Thomas and I shared: “I leant against the bar, drinking bitter… I liked the taste of beer, its live, white lather, its brass-bright depths, the sudden world through the wet brown walls of the glass, the tilted rush to the lips and the slow swallowing down to the lapping belly.”

Graham Thomas continued, “I knew him little, but well enough.” Well enough to know his movements. When Dylan Thomas visited the pub to thieve stories from the townsfolk, Graham Thomas explained that he and the poet’s son pilfered cider from Dylan Thomas’s shed.

“I’m not interested in [the stories] though,” Graham Thomas explained. “He was just an ordinary person.”

“The real story is this man,” another local interrupted, pointing to a long-faced man featured in three black-and-white photographs. These were the only pictures on the walls dissociated from Thomas. “Boodha Roberts was his name. Deaf and dumb, and they accused him of murder.”

For the remainder of the afternoon, the residents gossiped about this crime that had taken place in 1953. Their conversation had the pace and charm of a Thomas story, like when the protagonist of Return Journey stops at a pub on a wintry morning in—albeit—Swansea and encounters the unpunctuated ramblings of a barmaid—“Seen the film at the Elysium Mr. Griffiths there’s snow isn’t it did you come up on your bicycle our pipes burst Monday…”—and that Welsh art of spinning yarn—“I remember a man came here with a monkey. Called for ‘alf for himself and a pint for the monkey. And he wasn’t Italian at all. Spoke Welsh like a preacher.”

I sat beneath the photograph of Thomas, near his preferred seat, and listened as the locals debated the innocence of Boodha Roberts.

In Old Garbo, the narrator joins men who “met every morning for gossip and stories.” The narrator says, “I made my way through the crowds… and all that time I thought of the paragraphs I would never write. I’ll put you all in a story by and by.”

I sipped my bitter as the sweet canards in Brown’s continued—ones that were most likely part show and part mundanity; for Thomas most likely cheerless and horrid. But because of the great writer’s early death, these men who filled the pub in Laugharne sounded to me like the epitome of Thomas characters, had—beyond this account—never inspired any paragraphs or stories, by and by.

Noah Lederman writes the travel blog Somewhere Or Bust. His writing has appeared in the Economist, Boston Globe, and elsewhere. He tweets @SomewhereOrBust. 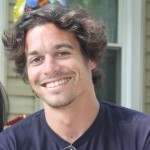 One Town To The Next: Through A Beer-Filled Looking Glass

Brewed on the Desert: Homebrewing at Burning Man