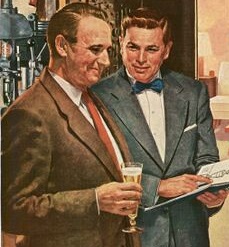 Harry Schuhmacher reflects on the suit-wearing beer executives of days past.

On a warm February night 20 years ago, I found myself at an establishment in west Houston drinking beers with my boss and several top executives from Heineken.

I was a wide-eyed 25-year-old greenhorn—a middling sales guy at a large beer distributorship—and I remember just being honored that I was invited to tag along with such prestigious beer men. (Yes, they were all men. I don’t recall many women in the beer industry back then outside of telephone sales.)

We all wore dark suits, white button-down shirts and either red or blue ties, the uniform of the beer executive back then. The establishment happened to be a topless joint called the Trophy Club, and it was not uncommon to entertain visiting brewery executives there. I recall one of the executives turning to me and saying, “Don’t you love the beer business?” Indeed. (Philip Van Munching would later write about this night in his book, Beer Blast.)

That anecdote makes me think of the Super Bowl halftime show my senior year in high school in 1987. I was at my grandfather’s house watching the game and drinking Lone Star with him. I was only 18, but he didn’t seem to be concerned about contributing to the delinquency of a minor. Anyway, Disney had produced the halftime extravaganza, and it featured several Disney characters marching around the field to such old classics as “Somewhere Over the Rainbow” and “When You Wish Upon a Star.” Yes, the Super Bowl halftime shows have come a long, long way since then. Can you imagine Snow White having a wardrobe malfunction?

But the real kicker of that show was when the ancient comedian George Burns was trotted out to start the festivities. After Snow White tells the audience who he is, he says: “A pretty gal. But a little too old for me.” The audience roared with laughter. My grandfather had tears in his eyes. Can you imagine the uproar on Twitter if some old guy said that about Katy Perry in this year’s game?

You may at this point be wondering what the point of these two unconnected anecdotes is, or indeed if this column has any point. Stick with me here. My point is that the attitudes, values, beliefs and standards change quite dramatically from decade to decade. Even Anheuser-Busch executives wear blue jeans daily to the office, and I doubt anybody at Heineken would be caught dead in a topless bar (at least not with business associates. At least that’s what the dancers tell me—not that I frequent those establishments … much).

While it was common to entertain that way in the 1990s when I was getting started, (the tail end of the three-martini-lunch era), we also dressed much more formally. It’s interesting to me that we had stricter dress codes back then yet it was perfectly acceptable to make sexist jokes during the Super Bowl.

Old men tend to pine for the old days, but I don’t miss much about that era, because back then things that didn’t matter tended to matter. Business norms that were pointless in my view had to be observed. I didn’t like wearing a tie and coat in 100-degree weather, but I did. I didn’t like having to read and forward inter-office memos (in the manila folder with string tie, remember?), but I did. And I didn’t like that our beloved industry—the best industry in the world, then and now—was overrun with men. White men. Stupid white men in many cases. I know because I am one.

You can make the case that the beer business back then was chauvinistic. A good case, actually. But I also think the industry itself reflected the demographic it was targeting. It was a foregone conclusion back then that beer was for men. Women didn’t drink beer; it was inconceivable that they would. It’s bitter, it’s fattening, it makes you burp. Of course, millennial women turn that assumption on its end and routinely drink the hoppiest double IPA and burp with abandon. I know, because I date one.

And we must thank the beer gods that women today do drink beer. I remember an executive at Diageo, one of the largest wine and spirits companies, making a speech 10 or so years ago and declaring that the reason spirits were kicking beer’s butt is that they know how to market to women and we didn’t. It was valid criticism—and still is to this day. But it’s getting better. Back in about 2005, beer marketing hit a chauvinistic low (but aesthetic high) when Miller Lite aired a TV ad called “Catfight.” It featured two attractive women, one a light blonde and one a brunette, who get into a fight about whether Miller Lite tasted great or was less filling, and they end up wrestling in a fountain in their leopard-print underwear. Today Miller Lite airs ads about the three varieties of hops they use in the brewing process.

When I look out over the vast crowd at the Craft Brewers Conference or an Anheuser-Busch sales and marketing meeting, I get a little ball of warmth in my heart to see so much more diversity. It makes sense, because as an industry we need to reflect the people who buy our products. We’re still not there yet as an industry, but we’re definitely making progress.

When I have lunch soon with Heineken USA CEO Dolf van den Brink, it will not be at a topless bar. It will be at a beer-centric establishment, and neither of us will be wearing a tie, and we’ll be accompanied by his senior vice president and chief corporate relations officer, Stacey Tank. She’s a woman, by the way. This to me is the greatest victory of all.

Harry Schuhmacher
Harry Schuhmacher is the editor and publisher of Beer Business Daily, a beer industry trade publication. His book of essays, Thank You for Drinking Beer, is now available. He tweets at @beerbizdaily.