The familiar tale of IPA is simple enough: Pale, hoppy beer is ingeniously invented by the Brits specifically to weather the voyage east to sate the troops and expatriates in India. In truth, IPA was neither novel nor necessary, but opportunistic marketing of existing 18th-century ale, refined further through good fortune, then widely popularized back in Britain. Two centuries later, IPA has come full circle, championed by American microbrewers—essentially, our flagship, symbolic style.

IPA is often historically misrepresented, addled with recirculated myths and half-truths. Through tireless research by authors such as Martyn Cornell, many of those fables have been untangled. Intent on dispelling misinformation, Cornell has explored this and many other subjects with the vigor and passion that only a true beer lover and scholar can.

IPA itself was born in 18th-century London, earning its sea legs from the East India Company. Founded in 1600, it monopolized commerce between Britain and The East Indies. Its fleet consisted of about 70 ships called East Indiamen, quartered primarily on the River Thames.

Among the exported wares were porter and the seasonal October beer, strong, hoppy stock bitter, brewed with pale malt and cellared for at least two years. It was found that temperature fluctuations and constant agitation in oaken casks while at sea expedited the maturation period. Within a few months, it tasted of two-year vintage stock. It was not specially brewed, and weighed in at 6 to 6.5 percent ABV. October beer was preferred by civil and military servants, while porter was more popular with the troops.

To maximize profit, Indiamen commanders and deckhands often shunned massive London breweries in favor of George Hodgson’s modest Bow Brewery. Founded in 1752, it sat conveniently on the River Lea, a tributary of the Thames. Hodgson, porter and October beer brewer, also offered attractive long-term credit. By the late 1700s, Hodgson’s October beer had a firm grip on the Indian market, due to reputation and quality, but also his less-than-equitable dealings. The Bow’s market share held firm into the early part of the 19th century.

Determined to crack Bow’s stronghold by imitating its India Ale, prominent EIC member Campbell Marjoribanks met with eminent Burton brewer/exporter Samuel Allsopp in 1822. A prohibitive import tax imposed on ale in Russia that same year gave brewers even more incentive to prospect East Indian markets. After brief experimentation, Allsopp exported his first “East India Ale” in 1823, one superior to Hodgson’s. Allsopp was an expert brewer, but he was also blessed with perfect water at Burton Upon Trent.

Allsopp drew calcium sulfate-rich water from the Keuper marls aquifer, which had multiple beneficial effects. The brewing water extracted less color and more fermentables from the malt, smoothed the hop character and helped precipitate protein. The increased brewhouse efficiency made this Burton Pale Ale more affordable. Other Burton brewers followed suit, and Burton Upon Trent quickly became renowned for India Ale. Burton-style IPA was also made where the water was similar to Burton.

Unique to Burton breweries was an elaborate “union system,” fermentation casks fitted with gooseneck tubes that sent top-cropping yeast from the cask to a trough to sediment yeast and recycle wort. This begat bright, clean beer and culled union-friendly yeast strains. Dry-hopping in the cask was de rigueur, preferably with Goldings from East Kent, the premium product of England’s now-flourishing hop industry.

The future IPA was also called East India Ale or East India Pale Ale. The common use of IPA came in the 1840s.

IPA remained popular through the 19th century and until World War I, when gravities nose-dived because of taxation. Based on gravity, this duty made traditional IPA something of a luxury for many breweries. Very few in Britain now exceed even 5 percent ABV.

Modern American IPA predates the microbrew era. The most famous was Ballantine IPA, brewed in Newark, New Jersey. A 19th-century English recipe, 7.5 percent ABV, 60 IBU and oak-aged, it fell victim to the macrobrew dilution of beer in the 1970s. IPA would not languish for long: A Renaissance was looming.

Anchor Brewing Co. debuted Liberty Ale in 1975, featuring American ingredients, and offered an idealistic vision of microbrewing future. This revelatory brew was stunningly simplistic, unique and flavorful. IPA was reborn, coming serendipitously on the cusp of a general reawakening of culinary arts. Like the Burton brewers of the 1820s, this model was promptly emulated.

Initially, pale ale became a standard house offering of brewpubs and microbreweries in the 1980s. That nascent hop fetish merely whetted the palate of beer lovers and demanded that brewers ante up. IPA became the new American darling, and by the 1990s, hundreds were being brewed, following a meteoric ascent in popularity. The IBU race was on, and this segued to aggressively hopped IPA. The style evolved further, with an emphasis on aromatic expression and profile experimentation, leading to unimaginable diversity and, eventually, sub-stylistic development.

Agricultural scientists got busy crossing cultivars of diverse origin, growing traditional European hops outside their native lands and propagating super-IBU cultivars of standard varieties. This has netted more than two dozen new hops over the past 20 years. European growers have also been expanding their horizons in recent years.

The color is deep gold to full copper. Caramel malt, when used, is faint to prominent. Attenuation is high to medium, and 6-7.5 percent ABV brackets the vast majority of IPA. A feature of American IPA is the fairly neutral footprint of the yeast, but many brewers prefer to combine estery British strains with their aromatic concoctions, or make outright English versions altogether. Clearly, there is significant breadth to IPA.

This brings us to the hops, the very soul of IPA. Brewers can select for citrus, tropical fruit, minty, herbal, floral, spicy, evergreen, woody or earthy notes, and any combination thereof. IPA may have a clean to rugged hop profile, resinously dank to clean and crisp. Sublime, complex hoppy aromatics have replaced IBUs as the calling card of IPA. IBU ratings of 60 to 70 strike the perfect balance. The potential hop schedules and profiles are limitless. IPA is meant to be consumed fresh, before aromatics dissipate, quite unlike their aged ancestors.

English hop growers have also diversified, many new varieties having been cultivated within the past 30 years, thanks to the renewed interest in cask ale and CAMRA, and an ongoing, centuries-old appreciation for bitter, aromatic ale and beer.

Wet- or fresh-hop IPA is now a popular fall seasonal where hops go from field to kettle within a day or two. Other variations are single-hop IPA and single-hop “series” IPA.

Perhaps, even historic IPA will enter the fold, well-aged, with a bit of Brettanomyces character, but seemingly, modern IPA lovers are quite happy with the status quo. There are so many outstanding ones available either as widely distributed national brands, as well as local gems. IPA has become a galaxy of stellar beer, and also the brightest star. Enjoy the voyage. 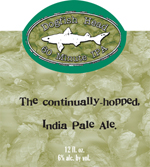 ABV: 6
Tasting Notes: The Dogfish Head Brewery of Milton, DE, is renowned for its offbeat approach to brewing. It also makes some stellar classic brews, of which 60 Minute IPA is one. Brilliant, brassy gold. A hard pour produces a thick ivory head that leaves strands of lace. Sixty minutes of continuous hopping makes the nose airy and vibrant, featuring a well-rounded fusion of fresh, resinous herbs, cedar, grapefruit and hints of apricot. The mouthfeel is lean. Some caramelized sugar taste and lots of woodsy and citrus hops in the flavor. The finish is intense, with long-lasting bitterness and grapefruit flavor. 60 Minute is built to enjoy year-round.

ABV: 7
Tasting Notes: The Bell’s Brewery of Kalamazoo, MI, now in its 28th year, is the epitome of sustained quality. Two Hearted Ale is old-school IPA, using only Centennial hops from kettle to fermenter. It pours deep gold with a bit of haze and a medium off-white head. Two Hearted has a simple, elegant citrus, floral aroma, with some background fruity notes. A medium mouthfeel marries perfectly with the velvety smooth flavor that features neat, grainy malt, faint honeyish sweetness, grapefruit and lemon. Two Hearted puts its hop aroma and flavor footprint forward. The finish is easy and silky. A very unassuming 7 percent ABV. 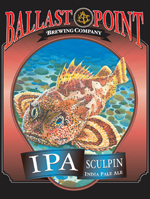 ABV: 7
Tasting Notes: Brewed at Ballast Point Brewing and Spirits in IPA hotbed San Diego, Sculpin is clearly focused on hop aroma and flavor. It pours pale copper and slightly hazy. The nose is a bright, fresh salvo of evergreen, mango, pineapple, tangerine and peach. The mouthfeel is medium and creamy. A firm malt framework is complemented with sweet orange zest, pineapple and piney hop flavor, and finished with a touch of caramel malt. Sculpin finishes clean, with another deluge of American hop flavor and little lingering bitterness. In a word, superb.

ABV: 7.4
Tasting Notes: The Meantime Brewing Co. of Greenwich, London, produces classic London and eclectic brews on the banks of the Thames. In true heirloom fashion, Meantime makes liberal use of Fuggles and East Kent Goldings hops in its IPA. Hazy orange-amber, with a rocky head hat is firm and tenacious. Plenty of bready, malty notes cut through the hops, which offer earthy orange, spicy and floral aromatics and some yeasty esters. The smooth, rich mouthfeel is followed by peppery citrus hops and a honey malt background. Mellow hop flavor brings the malt to the foreground. Bitterness is somewhat reserved. This IPA has a wonderful thread of hoppiness throughout. Corked and caged, respectfully brewed.