The approved assignment for this column was to be about attending the 1994 Craft Brewers Convention in Austin, TX, where Charlie Papazian, then-president of the Brewers Association of America, took to the stage inexplicably in a clown outfit to wild cheers. It was to be titled “Clown Shoes.” It was to be an introspective on how much more professional the beer industry has become since then. It was to be brilliant and nostalgic at the same time, with an ending lilting toward melancholia, leaving the reader sad but hopeful. What came out was an article comparing the beer industry to Russia. So be it.

The Winter Olympics are finally wrapped up, leaving the impression on the outside world that no amount of plaster and whitewash can hide Mother Russia’s cracks. Hotel door knobs missing, elevators failing to open, halfpipes not smooth enough for Shaun White—chaos.

Nothing set the problems off more than the image of Vladimir Putin grimacing away from the screen as the fifth Olympic ring failed to morph from a snowflake.

This image made me think of a piece the urbane Dick Cantwell of Elysian Brewing Co. wrote in 2011 that compared the sale of Anheuser-Busch to the Belgo-Brazilian InBev to the fall of the Berlin Wall in 1988 and the subsequent fall of the Soviet Union. That deal—which created AB InBev, by far the largest brewer in the world—marked “the end of the age of cuteness,” wrote Cantwell. “As we confront the post-beer-baron era, not only has the landscape changed, the future is ours,” meaning independent brewers.

Dick’s words proved prescient. From my perch, it has been nothing short of astounding to see the beer industry change from being dominated by three players to today watching the tail wag the dog. The rainbow of brewers sprouting up across the land has had the effect of shifting power from the few to the many, and has had a ripple effect of democratizing distributors, retailers, consumers and even the press.

To give you an indication of how far things have come, consider this mostly true story. In the age of the Beer Barons, the power in the industry was held in very few hands—people with last names like Coors, Molson, Stroh and Busch. Back then the most important meeting of the year—the big kahuna—was the Beer Institute meeting. Not because of its size (the National Beer Wholesalers annual convention and the Craft Brewers Conference are much larger), but because it’s so exclusive that only a couple hundred people attended each year, and it was the right people. For a journalist making his living covering the industry, it was crucial to attend. Naturally, I couldn’t obtain an invitation to attend, while my competitors did. The president of the Beer Institute at the time, the late Jeff Becker, called me and said, “Listen, pal, you didn’t get the bid again this year, but I’m pulling for you.” I asked him why, and he evaded my question. Later I learned why.

The godhead of the U.S. beer industry, the Beer Baron’s Beer Baron, was August Busch III. If there was any man in the world who would be considered the opposite of me, it’s that guy. He was the chairman of Anheuser-Busch when it was eventually sold to InBev, but in the previous 30 years he ran the company with an iron fist. Square-headed, steely-eyed, buzz-cut and short, Busch III fit the bill perfectly as the Teutonic Beer Baron, except he wasn’t fat or fun. He spoke in clipped, humorless sentences, constantly shooting questions at petrified underlings as he power walked on the roof of the brewery to his helicopter, which he used to commute to work to save time. He was that kind of executive.

The man garnered respect the old-fashioned way: He was terrifying to his employees and distributors. He was tough, a reputation he happened to enjoy. But you have to give credit where credit is due: No other single man ever presided over a larger organic gain in market share for beer—before or since or probably ever again.

The one and only time I ever met Busch III was at the opening of a new distributorship facility in San Antonio. As “Three Sticks,” as he was called, smiled and shook hands down a receiving line, his expression turned dull as he took me in. “Mr. Busch, I’m Harry Schuhmacher, publisher of Beer Business Daily,” I said. His eyes raked my face as he murmured that he’d “seen the paper around.” The guy next to me turned to me and said, “Well, at least he’s seen it.” It was clear Three Sticks didn’t know me from Adam, and if he had known me, I’m quite sure he wouldn’t have liked me.

But that soon changed. In an issue of Beer Business Daily, I made the editorial decision to playfully refer to Three Stick’s son, August Busch IV, who had a reputation as a playboy and was prone to scandal, as “the Ted Kennedy of the beer business.” I know, not a very clever repartee, but it was all the game I had.

The article was passed around and eventually fell into the hands of Three Sticks, who also did not find it funny and allegedly instructed folks to bar me from the Beer Institute meeting permanently, according to friends who were on the board.

After a few years I was eventually allowed to attend, but such was his power. Ironically, while my little joke about Busch IV is what allegedly got me banned, it was Busch IV himself with whom I eventually forged a relationship and who thus got me access to Anheuser-Busch. And I would say we ended up being friends of a sort for a time. Once Anheuser-Busch was sold to InBev, Busch IV became, in effect, the last Beer Baron. Or was he?

Dick Cantwell said in his piece, “We don’t really do empires.” Like the Soviet bloc being broken up into Baltic states and autonomous republics, the beer industry has become fractionalized. But that very fractionalization, with about 2,500 breweries operating this year and consumer demand remaining strong, has created a gold rush. No, not a bubble like the real-estate market in 2008, but a gold rush circa Northern California in 1849. And the winners of this gold rush will be the new Beer Barons.

With brewers buying stainless tanks as fast as they can be installed, breweries large and small are adding brewing capacity at breakneck speeds. This is good, because so far demand for beer brewed by small and independent brewers has outstripped supply. But the new prospective Beer Barons of today, to fill those shiny new tanks, are in a rush to expand distribution into new markets before distributors and retailers throw up their hands and say “nyet!” or the competition becomes so fierce that pricing starts to drop, or both. 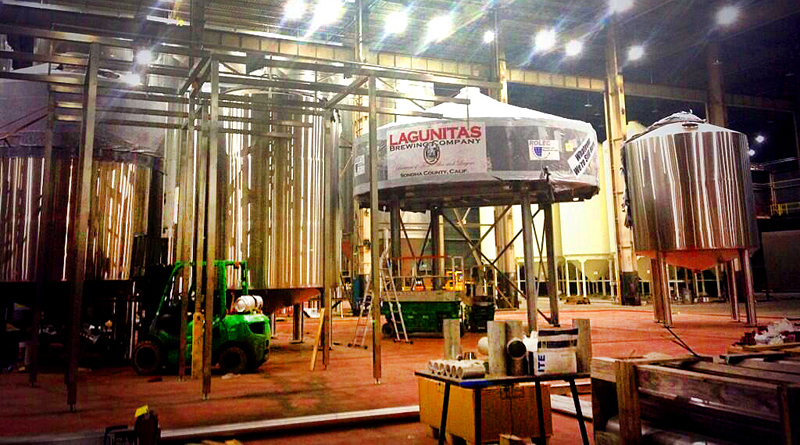 Indeed, Lagunitas’ million-barrel capacity is close to fruition thanks to a new brewery in Chicago coming online. Others are following. New Belgium has accelerated its expansion into new states, just recently expanding into Ohio and Mississippi, with Kentucky and Hawaii up next as its new brewery in Asheville, NC, is a’building.

It’s not just the larger breweries racing to expand. Detroit-based Atwater Brewery will be in the final planning stages to construct a $15 million, 100,000-barrel facility in Austin, with the motto, “Brewed in Austin. Born in Detroit,” per Crain’s Detroit Business. The company is planning a similar brewery in North Carolina. “We have eight new markets ready to go as soon as product is available, with another five planned for 2016 and beyond,” said chief Mark Rieth, who took over at Atwater in 2005. He says he wants to grow scale enough to “become a mega-regional player.”

How many other Atwaters are out there? From talking to folks in the trade, a lot. These are the new wannabe Beer Barons. And as with perestroika in the former Soviet Union, the outcome of growth and freedom isn’t always all roses. In fact, it can go horribly wrong: Overbuilding of capacity, discounting to move beer, old beer in the market, the brewing of sub-standard beer—these are the pitfalls the new Beer Barons must guard against. This is how you end up with a snowflake that fails to morph into an Olympic ring, or a wrestler caught in an elevator, or worst of all, Shaun White criticizing the state of your halfpipe.

But there are glimmers of hope. For one, this industry is starting to get the cachet and scorching demand enjoyed by the high-end wine industry for the past 20 years, but it hasn’t attracted as many superficial millionaires and movie stars—yet. And while beer is starting to get respect in fine restaurants, it is still not considered snobby and remains as approachable as a shaggy dog. And the new Beer Barons are, for the most part, the type of people you’d want to have a beer with. To me, keeping it that way is the surest way to keep this industry vibrant and strong. Just please, don’t ban me from any meetings.

Harry Schuhmacher
Harry Schuhmacher is the editor and publisher of Beer Business Daily. He tweets at @beerbizdaily. His book of essays, Thanks for Drinking Beer, will be out in early 2014.