What Beer Do You “Pair” with a Blind Robin?

I recently stirred some outrage among Facebook beer lovers by noting that Food and Wine executive wine editor Ray Isle had put the cause of beer and food pairing back 15 years with his comments on five beers picked by the “CBS Early Show.” BridgePort IPA was paired with fried foods, “anything from fried shrimp to French fries.” He typified Full Sail’s Session Lager as a “classic all-purpose beer: chicken, potato chips, pretzels, you name it.” Wow, what an all-rounder; chips and pretzels! But he really stepped in it with Deschutes’ Green Lakes Ale: “I’d drink this with a hamburger; for me, ales like this are ideal burger wines [sic].” He rounded out this full-spectrum menu (for Applebee’s, maybe) with ribs, sausage, and grilled seafood.

I was enraged. What about a peppery saison and smoked bluefish, you ingrate, or a snappily Saazed-up pilsner with a steaming fresh tureen of goulash over noodles? What about witbier and a mesclun salad, eh? Like to see your precious wine pair with that ….

But a thought slipped into my rage … man, a fresh pour of BridgePort IPA with a basket of cheese fries would be great, wouldn’t it? And Session Lager with a hot slice of pepperoni and onion, or just a six-pack of Green Lakes with some roasted peanuts? That would be pretty good too. Beer is great with that stuff, and while the rest of the country is still lapping it up, we craft geeks are ignoring it as we rush to pair with foie gras and asparagus tempura. Beer may be the new wine, but you know, it’s still the old beer, too.

Take Me Out to the Ballgame

Just look at the ballpark, any ballpark: baseball, football, hockeyball, whatever. You’ve got beer for sale, from Bud Light to Victory HopDevil; I got a $6 doublebock at a minor league park last year. What do you have with it? Hot dogs, sausages, popcorn, peanuts, pizza―hell, practically every beer-food there is!

Drop the snooty, “We’re as good as wine!” face and reconsider the foods you’ve rejected. Hot dogs are American-made, doctored up with brown mustard and onions, sitting up and begging for a beer, but they’re sausages, too! You can get a brat or a sweet Italian if you want―they’re all pretty good with something malty and smooth. That’s what they’re drinking at Oktoberfest, and they don’t even have a game to watch.

Grab a slice of pie and you’ll know why Chicago’s Piece brewpub is a presidential favorite: pizza and beer really do go together. I did a piece on pairing beers with various pizzas a while ago, and one of the best was a white pie with spinach, heavy laden with garlic and fresh olive oil. I got it at a neighborhood pizza joint, cost me $12, and it was beautiful with a fresh Sierra Nevada Pale Ale whacking through the oil and taming the garlic.

Ballpark peanuts range from salty nuggets to still-warm fresh-roasted beauties, and all kind of sugar and spice-coated in-betweens. Beer will clear your mouth of those little chunky bits and fizz away the fat (just like it does for fancy cheese and rich paté). Don’t worry about “as good as wine”―let’s see someone cracking open some goober peas with a glass of merlot.

Tailgating works too, and I’m not talking about the crazed tailgaters who wheel in a trailer loaded with smokers and deep-fryers. I’m talking about a portable grill with burgers snapping and popping (hello, Mister Pilsner!), warming up some already-smoked ribs (make that spicy rub sing with your favorite IPA), and big bowls full of baked beans and potato salad (pale ale was made for baked beans). This is beer food that’s deep in your American soul!

If you’re not at the game, you’re probably either drinking beer at home or at a bar. What you eat at home is your own lookout (I had some Zatec Dark with tacos tonight, and it was beautiful), but at the bar, you’re likely to be snacking on some weird shit you probably wouldn’t even look at twice in the store.

You know what I’m talking about: pickled stuff, floating in jars on the back shelves of bars. There are fairly normal things, like pickled eggs (or the purple variation in my home Pennsylvania Dutch country, where they add beets to the brine) and pickled sausage, or pickled pig’s feet. Yeah, pig’s feet are fairly normal, because you’ll also find things like pickled lamb’s tongue. I’ve seen gallon jugs of pickled lamb’s tongue―who’s eating all those things?

And why bother? I talked to a woman at Dietrich’s Meats in Krumsville, PA, once about the subtle differences between lamb’s tongue and pheasant hearts (you wouldn’t believe the pickled organs these people had for sale). “It all tastes the same after it’s been in the vinegar for three days,” she told me. (But you gotta stop in for the smoked duck and “hot stix,” a spicy, slim beef sausage. Mostly beef. I think.) 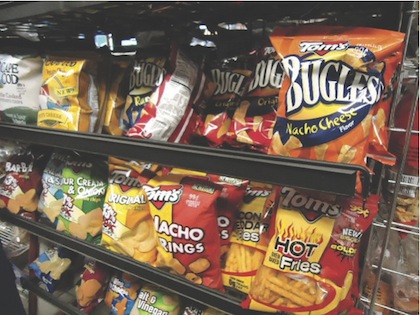 The meat doesn’t have to be pickled, either; at least, I don’t think pickling is one of the things they do to Slim Jims. “You know my favorite thing about Slim Jims?” asked Ted, the day bartender at the Commix Hotel in Emmaus, PA. “The second ingredient on the list: ‘mechanically separated chicken.’ Know what that is?” I did―and I’d rather not think about it―but he made me eat one anyway. Thank God for cold Yuengling to cut the grease and cool the spice.

“It goes in cycles,” he said. “Beef jerky was big for a while, then it stopped. We used to sell the jarred stuff, but if it sits too long, it changes color. It’s still good, but it looks funky. Slim Jims, though, they sell all the time, everyday.” He admitted that the bartenders eat a lot of them.

A Salt and Battery

What about blind robins, picked as one of the worst convenience foods by food (and travel, and sports uniforms) writer Paul Lukas? No one I’ve ever spoken to or read has a clue on why these chunks of skinless smoked herring are called blind robins. They come in 1 ounce plastic packets, stapled to a card for display. I was first introduced to them by a history professor in college, a Canadian, who told me they were “Newfoundlander soul food.” Those poor Newfie bastards. Blind robins are powerfully fishy and wicked salty, and they will raise a thirst … and isn’t that the point? Beer’s the only thing that can deal with them! 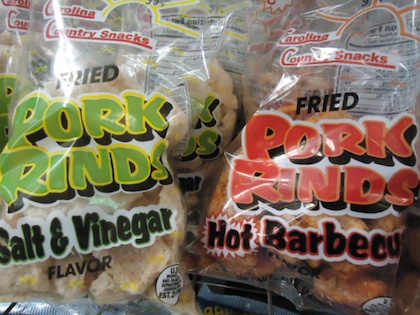 Salty snacks are a beer classic―bars serve them to get you to drink more beer, and it works. What would a bar be without racks of chips, salted peanuts, and Combos. You know Combos, the Official Cheese-Filled Snack of NASCAR? It’s not easy getting cheese-like filling into hollow pretzel nuggets, but once they do, it’s beer time. If beer goes well with Stilton and Hoch Ybrig, it can go well with whatever that cheese is in Combos, too.

I paused to reflect on this as I enjoyed a plate of pickled quail eggs with a bottle of Yuengling Porter at a hotel bar in Shartlesville, PA. There’s a reason they have this stuff in bars. It goes with beer. You sure can’t eat something soaked in vinegar with wine, it will make the wine taste just like the vinegar it can become. All that salty stuff will kill a wine―beer takes it in and embraces it. Beer sweetens things up a little, puts a bitter edge on it. Beer makes these little quail eggs sing like birdies. Besides, you need a couple beers before you start putting crap like this in your mouth.

You Can Go Home Again

It’s all good. Think about it. Are you doing burgers on the grill this summer? Do you still get take-out Chinese and pizza, still whip up spaghetti and meatballs? Do you watch the game with a bowl of peanuts or corn chips at your side? You bet you do, and that’s why almost every brewpub and “gastropub” (God help me) I’ve ever been to, even the most aspirational ones, has a bar menu of some kind with burgers or fries, or fish and chips, or pizza. Beer is still the drink of the folks, and the folks like those foods, and so does beer.

Every day is a new beer occasion, and pretending that the beer-food “pairings” that wine folk like Ray Isle want to force us into are beneath us is ridiculous. They work, they’re great. Go crazy with the suggestions in the rest of this issue. I’ve had beer and food pairings that were shockingly unexpected and awesome in their rightness―snails in puff pastry and Allagash Interlude come to mind. The Germans and Belgians have great beer cuisine, and I love it.

But it’s not beer dinners and lambic bars and cicerones all day everyday out there. Don’t pretend you don’t like a hot slice with a cold beer, don’t act like you never eat food out of a cardboard box with that kickin’ IPA. Beer loves that food, too. Feel free to share the love.

aab
Lew Bryson has been eating weird stuff in Pennsylvania bars since about 1981: blind robins, pickled quail eggs and the infamous "Martian Dix" at the Northeast Taproom in Reading, PA. And somehow lived to write about it.