A Tavern Behind the Times 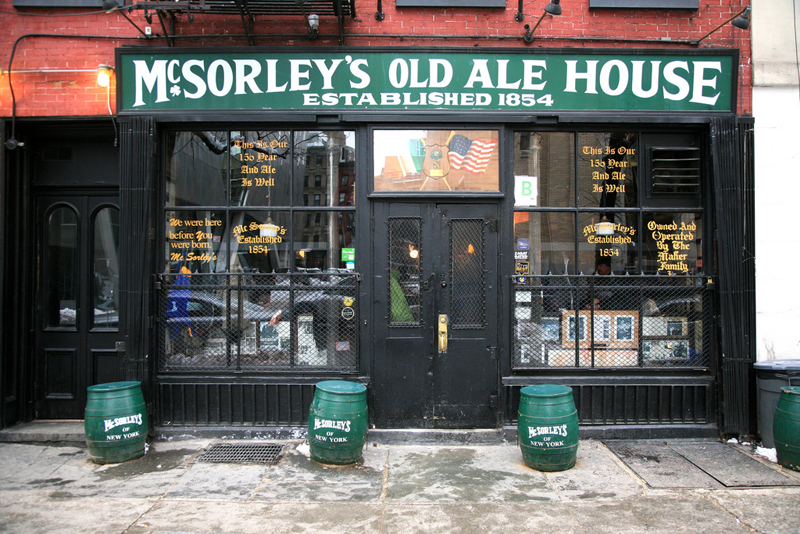 A year ago, I posted some excerpts from an article in The New Yorker dating back to 1940 about McSorley’s Old Ale House, a tavern in Manhattan’s East Village. That article discussed how aggressively behind the times the old tavern was … and it’s now 75 years later. In the 161 years of its life, a lot of people have visited and commented on it, obviating the need for one more report. Well, this is a blog, so you’re getting it, anyway. My guide was All About Beer Magazine editor (and friend) John Holl, who recently took me over for a beer. These are my findings.

A few things have changed, but McSorley’s claim to fame is its continued aggressive antiquity. Three or four people mentioned that not too long ago, somebody in an official capacity wandered through and was horrified by the hairy accumulations of dust on the old wishbones hanging over the bar and demanded a full cleaning. Maybe so, but the hair is piled back up to at least an eighth of an inch, so it seems like he hasn’t been back recently. The whole bar is clad in shades of gray, partly because of the undisturbed dust, partly because none of the pictures that cover every inch of the walls were taken after the introduction of color photography. The windows are dusty and the light bulbs weak; and the front of the bar, where the sun did manage to penetrate, was the one place patrons avoided.

As unchanged as the bar is, it must contend with visitors, and they arrive from 2015. Women are nominally allowed now (a court ruling in 1970 mandated it), but the place is so grimy that only one of the 20-odd patrons I saw was female. But people were wearing T-shirts and jeans, carrying backpacks, and of course, clicking photos on cell phones. McSorley’s has become such an institution that floods of tourists (like me) wash away some of the authenticity. What can you do? (Try to crop them out of the pictures.)

One of the most interesting things about the place is the beer. According to that Mitchell piece in The New Yorker, “McSorley’s always has come from the Fidelio Brewery on First Avenue; the brewery was founded two years before the saloon.” Well, now the right to brew it is owned by Pabst, and they make two beers, a light and a dark. When you order, you get two mugs at a minimum. “A beer” means two beers. They come with half head and half beer and settle into about a two-thirds pour. Ordering “two pales” will thus get you four half-filled mugs of pale. John ordered one and one to start so I could try both. The pale is toasty and warm but clean and lager-like. It’s American in that halfway sense that beers were once neither fully lager nor ale. The dark is much more lager-like—a schwarzbier, it tasted to me. I liked them both quite a lot, but when we had a second round, I ordered the dark. 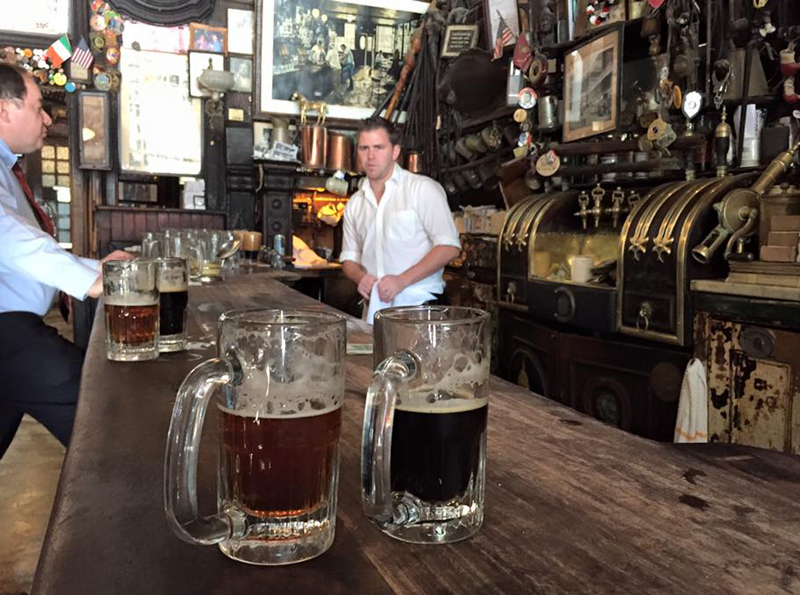 When you order one beer at McSorley’s you get two at a minimum—a pale and a dark. (Photo by Jeff Alworth)

Some institutions—particularly drinking establishments that cater mainly to tourists—become kitsch, self-parodies. I couldn’t decide if McSorley’s had crossed that line or not. Surely a truly living place would have abandoned the sawdust floor? Would have changed out a few of the old pictures with new-old pictures of the more recent long-ago history? But arguing against this point is the way the Irish bartender handled the empty glasses. Since people are drinking them by twos, and since they’re smallish and not filled full, there’s quite a volume. The bartender cleans them by taking two fanned fistfuls and plunging them in water a few times. Up on the drainboard they go, ready for another filling. That doesn’t seem like kitsch.

And it’s not something of which that state health official would approve, probably. But somehow, it doesn’t seem like the city is any more insistent about changes at McSorley’s than McSorley’s is. Manhattan is a strange place, in that it is absolutely remorseless about plowing the old under to make way for the new while at the same time cherishing the old places that somehow dodge the wrecking ball. (Across the street from McSorley’s is some new Gehry-inflected building.) If for no other reason than it has managed to survive, I guess I’ll assume it’s something more than kitsch.

Anyway, if you want to visit, I’d select a sleepy early afternoon sometime in the middle of the week. There are fewer patrons then, and fewer tourists, and you can cock your head just enough to see back through the decades as you try to find enough light to snap that cell phone pic.