Beer culture has not always been kind to its patrons. From the ancient Babylonians who drowned brewers in their own vats for making bad beer, to babes in bikinis purring over bottles of pilsner, it seemed that it has always been a prerequisite that we beer drinkers acknowledge that the joke—and sometimes even tragedy—is on us. Humorist Dave Berry wrote: “Without question, the greatest invention in the history of mankind is beer. Oh, I grant you that the wheel was also a fine invention, but the wheel does not go nearly as well with pizza.”

In the past decade the beer culture has transformed drinkers into a trendy lot, something more than yahoos at a Super Bowl party with a 20-pack. Savvy modern beer drinkers sip pints in neighborhood taprooms and rely on each other for validation, rather than the popular culture of advertising and entertainment. Not to put too fine a point on it, today’s brewers have classed the sector up a bit. The old culture was created in a universe of kitsch and sometimes bad behavior. Here is a tasting of some of the oddest moments.

Truth is Stranger Than Fiction

When you have been around as long as beer—some 4,000 years dating back to the Sumerians who wrote down the first recipe—you’re going to have some history. Consider that in the 13th Century it was common to baptize infants with beer, which was perhaps the inspiration for the website babieswithbeer.com. In the 1814 beer “flood” which measured 323,000 gallons and 15-feet high, seven women and children were killed in London. Beer has even been around long enough to have its own psychological disorder called cenosillicaphobia—the fear of an empty beer glass (it’s not just your imagination). In Missouri anyone under 21 who takes out the trash with even on empty beer bottle (or any alcohol) can be charged with illegal possession.

Buzzfeed posted its pick for most sexist beer ads, with three American examples in contention. Despite the fact that women make up 25 percent of beer drinkers, sexism in beer advertising has long been prevalent. Although the United States may have cleaned up its act some in recent years, in 1991 a lawsuit claimed female employees at the Stroh Brewing Co. were sexually harassed because of the company’s bikini beer ads. The New York Times wrote the suit “focused attention again on what some critics call the last bastion of sexism in advertising.”

But in the early 1990s, after one company ran a television spot featuring two house sitting dudes who were miraculously visited by a crowd of beautiful lady swimsuit models when they opened a well known beer, Saturday Night Live gave us all something to think about with this social parody.

Men Will Do Anything For Beer

Just recently two men in the Houston area drove a car through the front window of a Valero convenience store to steal an 18-pack of beer. It was 3 a.m., a time of day when almost all decisions are poor choices. In the 1983 movie “Strange Brew” the protagonists spend much of their waking time devising schemes for free beer.

Nothing could be better than combining a guy’s love of tools, gadgets and helicopters with a lively drinking song for a tutorial on how real men drink beer.

Not that women have been totally ignored by beer marketers. In a 1978 ad for “Body on Tap Shampoo” a newly discovered Kim Basinger introduces beer as a beauty product. She pitches a hair product made with one-third real beer and admonishes viewers, “But don’t drink it.”

There is nothing more responsible than being a business owner—both for brewers and drinkers. It’s easier than ever to invest in beer. In 1995 when the Boston Beer Co. went public for $20 a share, Sam Adams drinkers found coupons in their six packs to buy shares for the discounted price of $15. Today a share is selling for $214. Scottish Brew Dog, which exports to the United States, is offering “Equity for Punks,” promising that “you will literally grow richer with every beer you drink.”

And beer commercials? Today they are evolving—even if the joke never gets old.

John W. Mitchell lives on the Western Slope of Colorado. He writes on a wide range of issues, from craft beer to healthcare. See more of his writing. 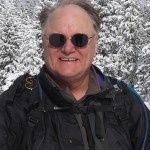 Once Upon a Time, Beer in Oregon ‘Wasn’t Great’