One Way to Warm Up A Beer: Use a Hot Poker 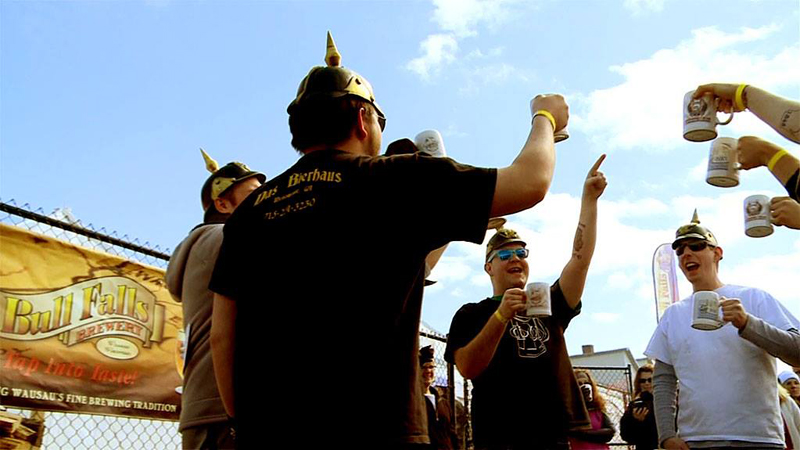 The calendar flipped to March, but here on the East Coast, the snow, ice and below-freezing temperatures did not stop coming. Forecasters said New York experienced its coldest February in 80 years. New England is buried under feet of snow. Even parts of the Mid-Atlantic got more than its usual share of winter unpleasantness.

Brewers are optimistic, and there are already spring seasonals on shelves. I seem to receive at least two press releases a day promising that more are on the way. However, when there is an inch of ice on my sidewalks and the dog is taking her sweet time sniffing around on the evening walk, the idea of a cold beer is not pleasant. No, I’m in the mood for something warm.

So I was intrigued when flipping through Randy Mosher’s new book Beer for All Seasons: A Through-the-Year Guide to What to Drink and When to Drink It (Storey Publishing, $14.95). There on Page 144—part of the chapter on winter—is a picture of a glowing fireplace poker being plunged into a generous-sized mug of beer. The caption identifies it as a “flip” and says it is “a hot beverage made with ale, eggs, and other flavorings caramelized with a red-hot poker or ‘loggerhead.’ ”

The idea of warming a beer with a hot poker is likely a German creation, and there are a handful of breweries in the United States keeping the tradition alive.

The annual bock fest held outdoors in February by August Schell Brewing Co. in New Ulm, MN, is a Midwest tradition dating back nearly 30 years. Jace Marti, the sixth-generation brewmaster of the company, said the temperature was around 5 degrees Fahrenheit during this year’s festival. It was minus-12 degrees in 2014.

“We have fire pits with fire attendants, and each have metal rods in the fire,” Marti says, “if someone comes up and asks to get poked, the attendant takes the rod out of the fire, knocks off the ashes and plunges it into the mug.”

The bock—it always needs to be a bock, the brewer says—fizzles and froths up a bit. Marti says the caramel malts in the beer gain some depth. The beer changes composition as well. After the hot poker treatment, it has “a super creamy mouthfeel, similar to nitro,” Marti says.

There’s a similar occurrence at Bull Falls Brewery in Wausau, WI, during its annual bock festival in March. Mike Zamzow, co-owner and brewmaster, says the festival bonfires are stoked with hickory, and volunteers, known as “Karmel Kaisers,” are tasked with warming up bocks with hot pokers.

“Because of the caramel malt, [the poker] changes the beer, and the effect is not unlike when you roast a marshmallow,” says Zamzow.

Both brewers say that using a bock is better than using a beer like an American lager, because the bock has a higher sugar content to react with the heat. If you decide to do this at home, remember to use caution when playing with fire and enjoying beer.

Making a flip at home. Recipe courtesy of Randy Mosher:

– 24 ounces or 750 mL of a fairly strong beer of your choice. (Mosher says he used 5 Rabbit Ponche, but has also tried Lagunitas Brown Shugga)

– A cinnamon stick or a pinch of ground cinnamon, to taste

– A grating of nutmeg

– Put the beer, rum/spirit, sugar and spices into a saucepan and heat gently. Bring to 170 F, no higher.

– Beat the eggs well, and when the beer has reached temperature and the sugar dissolved, add a little of the warm beer to the eggs, stir well, then add the egg mixture to the beer in a steady stream, whipping as you go.

– Now, here’s the unique part of the recipe. Heat a fireplace poker or some metal bar/object with a propane burner or torch until it is glowing red-hot. Jab the poker into the beer and hold it there until the poker has cooled and the beer stops bubbling. Flip is now ready to serve, perhaps with some additional frothing. Historically, the drink was poured back and forth between two vessels to foam it up, giving it the alternate name of “a yard of flannel.”

– Needless to say this is a project for grown-ups who are capable of obeying the usual precautions regarding alcohol, fire and glowing red-hot objects.

John Holl is the editor of All About Beer Magazine. Contact him via Twitter @John_Holl or [email protected]allaboutbeer.com