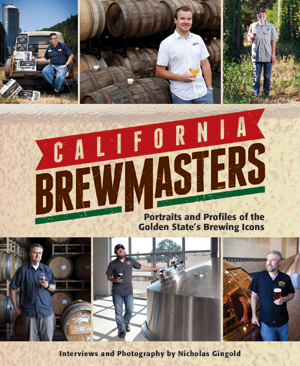 Soon after falling in love with specialty beer, Nicholas Gingold surveyed the world of beer books and noticed something was missing. There were plenty of guidebooks to breweries and books on styles and tasting, but few books focused solely on the people behind the beverage.

So Gingold, a native Californian who had recently returned home after a stint as a photojournalist in Washington, DC, started a quest to photograph some of the Golden State’s most iconic brewers. The result is California BrewMasters: Portraits and Profiles of the Golden State’s Brewing Icons, a coffee table book with stunning, museum gallery-worthy images.

Name the notable California brewer and he or she is most likely featured, beer in hand, smiling for Gingold’s camera. More than 40 brewers are featured, including veterans like Sierra Nevada Brewing Co.’s Ken Grossman and Russian River Brewing Co.’s Vinnie Cilurzo, as well as portraits of newcomers like Tyler King of The Bruery and Julian Shrago of Beachwood BBQ and Brewing.

Gingold interviewed each brewer, starting with the requisite, “How’d you get into beer?” before diving into conversations about specific beers and philosophies on brewing. Beer geeks from any state will enjoy reading the unfiltered responses.

In a state with more than 400 breweries, there will likely be some debate about brewers who didn’t make the cut. Here’s hoping Gingold’s quest has just begun.