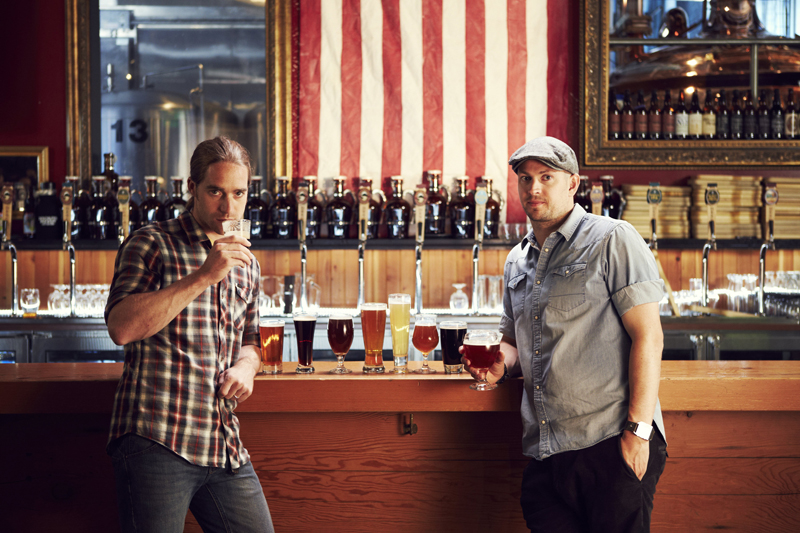 Martin Dickie and James Watt are back for a second season of BREW DOGS, premiering June 25 on the Esquire Network. Photo by Joe Pugliese/Esquire Network.

I recently spent a zany afternoon with Martin Dickie and James Watt, the two lads from BrewDog, the self-styled ‘”punk” Scottish brewery. They were in Durham, NC, to start filming the second season of their TV series “BREW DOGS.” This will open with a segment shot at Fullsteam Brewery, here in Durham—I should say our neighborhood brewery, since we can actually look out the front door of our office and see their front door two streets away.

Now, somber beer lovers like myself may find the antics of these two Scottish rebels to be a little off-color and disrespectful to the craft beer industry as a whole.

The reality is, the craft beer industry has always had its Merry Pranksters—though probably without as much success as these two guys. Dick Cantwell serves his pumpkin beer from a huge hollowed-out pumpkin. Sam Calagione gave us the Randal, a silly device for adding even more hops. Jim Koch has taken a bath in out-of-code Sam Adams Boston Lager—a promotion that he repeats with the visiting Scotsmen for the TV series. There’s always been somebody having a little fun with this business.

This will be the second TV season for BREW DOGS. That the series was renewed says a lot about the way their shtick connects with an audience. I know of so many beer television projects that never got off the ground, much less survived for a second season. As for this pair, think MythBusters.

Granted, these are the guys who brought you Tactical Nuclear Penguin, the most alcoholic beer in the world at the time, as well as The End of History, an even stronger brew packaged in a dead squirrel wearing a tiny kilt—efforts that offended just about everyone. But they also created the gold medal-winning Hardcore IPA. They feel that the silly is a way to explore the great, and they pursue it with passion.

At Fullsteam Brewery, the Brew Dogs production manager had mounted a small brewery onto a trolley pub: a human-powered vehicle, in this case brewer-powered. The riders—Brew Dogs Martin and James, and Fullsteam’s Sean Wilson and company—pedaled around town, providing the energy to power the mini-brewery, which made an imperial stout that incorporated maple syrup and smoked bacon. 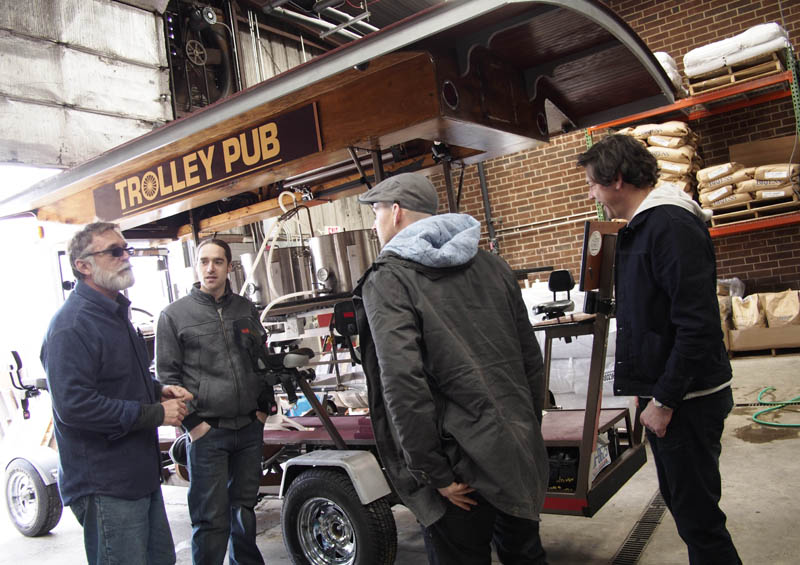 On the set for the season two premiere of BREW DOGS at Fullsteam Brewery in Durham, NC. Photo by Grant Halverson/Esquire Network.

Continuing the madcap beer-bending, the three pranksters served the beer over ice cream with a garnish of bacon.

You’ll have to watch the show to see the perverse way this all makes sense, but let’s just say it has something to do with the U.S. losing to Mexico in a very peculiar index.

Daniel Bradford is the publisher of All About Beer Magazine. Click here for a free trial.