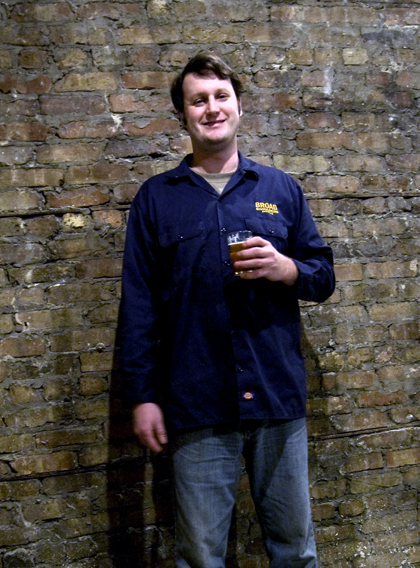 Frank Lassandrello: Broad Shoulders Brewing is a small production facility with a taproom. We will be making two year-round beers, a 4% ABV session lager and a 6% ABV India Pale Lager. Our goal is to make accessible beers.

I first started homebrewing when I was 19 with my best friend in the kitchen of our college apartment. I went to Green Mountain College in Poultney, Vermont, and the homebrew guy wouldn’t sell us beer but he did sell us the ingredients to make our own.

The first beer that we brewed was an extract IPA. I remember it being extremely undrinkable, but we finished every drop.

My favorite beer styles are continental lagers in general and pilsners in particular.

Mary Pellettieri was the QA/QC manager at Goose Island while I worked there. She taught me everything I know about sensory analysis and yeast management. These aspects of the process quickly became my favorite parts of brewing.

I draw inspiration from my palate. (Research and development) is very important, and I always try to find a way to make my beers unique.

To be a successful brewer you need a solid work ethic, patience, and a little good luck along the way.

Regionalism plays a huge role in the success of craft beer. Support your local brewer!

I think there will always be plenty of new things to explore. I’m betting that drinkability will make a strong come back in the years to come.

I hope to continue what’s been done before me, which is to continue to introduce new people to craft beer. It’s important to me to brew beer that many drinkers can enjoy.

It’s black IPA in the Midwest.