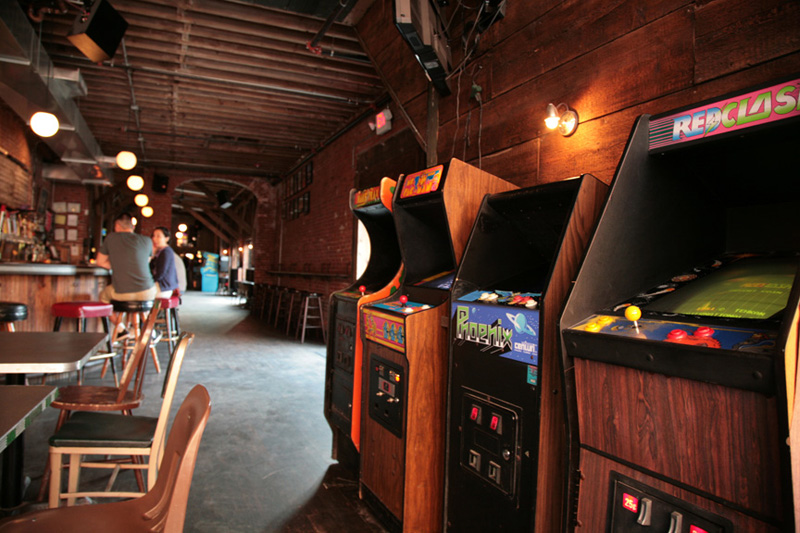 Rush’s “Tom Sawyer” blares through the bar. TV screens feature episodes of “American Gladiator” or old (and, in many cases, dead) wrestlers such as Jake “The Snake” Roberts, Ravishing Rick Rude and “Macho Man” Randy Savage. The menus are made from ’90s comic books. Some people play old-school arcade games such as Burger Time, Dig Dug and Defender. Others play an even older type of game: pinball. Now Def Leppard’s “Photograph” is playing. Everything is old—except the beer, which includes 5 Rabbit’s Yodo con Leche, Oskar Blues’ Old Chub Knightro Scotch Ale and Dogfish Head’s Positive Contact.

The location? Headquarters (HQ) Beercade in Chicago, which merges the ’80s-style fun of an arcade with the diverse universe of beer. Just as middle-aged folks are discovering the joys of flavorful beer, millennials are looking up from the smartphones to play games that are more physical and/or crude than they’re accustomed to. Beer arcades, with their mash-up of generations and cultures, are redefining a fun night at the bar.

The beer arcade trend began when Barcade (now a chain and trademarked term) opened in Williamsburg, Brooklyn, in 2004. One of Barcade’s co-founders, Paul Kermizian, was working in TV and film; he had just made the documentary “American Beer,” which looked at the exploding beer market. He was fascinated by the industry, one that was becoming more diversified even as consolidation was the norm. In his loft, Kermizian had several arcade games, which were quite the hit at parties. When Kermizian and three friends (Pete Langway and brothers Kevin and Scott Beard) decided to start a bar, those arcade-fueled parties were the inspiration. They had seen bars with an arcade game or two, but never one with 30 or more games. As Kermizian puts it, “We had no business plan. We just wanted to open a bar that catered to our interests.” Those interests blossomed at Barcade.

The beer arcade trend began in Brooklyn, but like the modern beer industry, it spread across the country. Seattle has several bars with small to large arcade spaces, such as Add-a-Ball and Shorty’s. Denver has the 1up Colfax (and sister pub the 1up Lodo), Los Angeles has EightyTwo, Atlanta has Joystick Gamebar, and it’s possible that no major city in America will soon be without its own bar arcade. The trend has exploded in Chicago, which features Emporium, HQ Beercade, Logan Arcade and Replay, plus new branches of HQ and Emporium (which was founded by a former manager of Barcade) on the way. The venues vary: for example, Logan Arcade transformed from a pinball museum into a full bar, and HQ is the only large venue where nearly all the games are free. All are thriving, as the Chicago beer arcade scene is experiencing the real-life equivalent of multi-ball.

The prominence of pinball in Chicago is a good example of how the bar arcade trend is evolving to fit its new environments. All of Chicago’s beer arcades have pinball games, but HQ boasts a full pincade, which differs from its inspiration: the original, but pinball-less, Barcade. In 2011, HQ co-founders Mark Kwiatkowski and Brian Galati spent some time in Brooklyn, where they were charmed by the artisan vibes and super-specific businesses. They checked out Barcade and were inspired to do something similar, yet different, in Chicago. One of the differences is a heavy investment in pinball, which is quite fitting in Chicago, the longtime pinball capital of the world.

What makes old games pair so well with new beer? Kermizian sees a geeky kinship between people who are obsessive about “niche interests.” Barcade and similar bars attract “nerdy types like [him]self” who can fall down the rabbit hole of an interest. You need a similar type of commitment to clear 60 boards of Ms. Pac-Man and educate yourself at beer tours and tastings. Enthusiasts of games and craft beer are anything but casual.

Both interests also show an appreciation for things that are handmade and hands-on. At beer arcades, sometimes you can spot a bartender patiently waiting for a nitro beer to pour, just as a worker performs delicate surgery on an Attack From Mars pinball machine, with its mechanical guts and silver balls exposed. Customers don’t have to make the beer or fix the games, but they appreciate things that take time, effort and craftsmanship. Old-timey games and newfangled beers both do.

There’s a lot to do and discover at beer arcades, but the best discovery of all might be a happy marriage of your younger and older selves. Twenty-four-year-old Heidi Butler, a comedian and actor who has worked at HQ, appreciates how beer arcades are “meshing our grown-up interests with our teenage interests. Fifteen-year-old me would have been thrilled to know that it’d be cool to play video games in a bar someday. Somehow, playing Area 51 with a good beer in hand feels like paying tribute to that socially awkward teenager.”

As America’s bard Walt Whitman put it, “I contain multitudes.” Beer arcades let some of your multitudes get together for an Imperial IPA and Frogger.